Southwest Florida saw a spike of nearly 3,500 cases in the past 48 hours.

The bulk of that came with Saturday’s record surge in cases statewide. That carried Lee County above the 10,000 case threshold, making it the eighth to reach five-digits.

The mortality rate in the 10-county area remains higher than the state as a whole, around 2.21% in Southwest Florida compared to 1.61% for all of Florida. The region tallied 50 deaths in the last week.

Lee County remains the leader in cases and deaths in the region, with 191 patients to date dying with COVID-19. That includes the very first Florida death, a woman who died at Gulf Coast Medical Center and tested positive posthumously.

But the greatest area of concern in the region may actually be in the less populated rural counties where infection rates are among the highest in the state.

In Hendry, fueled by an outbreak among farm workers in Immokalee, nearly 3% of the total population has now tested positive for COVID-19.

Regionally, the 10-county area serves as home to almost 30,000 residents who have tested positive for COVID-19 since the pandemic officially reached Florida. That dates back to the first Florida patient, a Manatee County case treated at Doctors Hospital of Sarasota.

Census estimates say that as of July 1, the region’s population reached just over 2.4 million. Cases per 100,000 residents sit as 1,243 as of Monday morning.

By comparison, Miami-Dade County’s population exceeds 2.7 million and the 67,713 cases there represent an infection rate of 2,492. That’s lower than Hendry but a greater infection rate than any other Southwest Florida county. 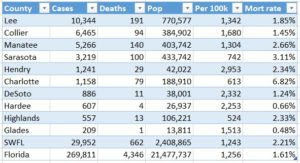