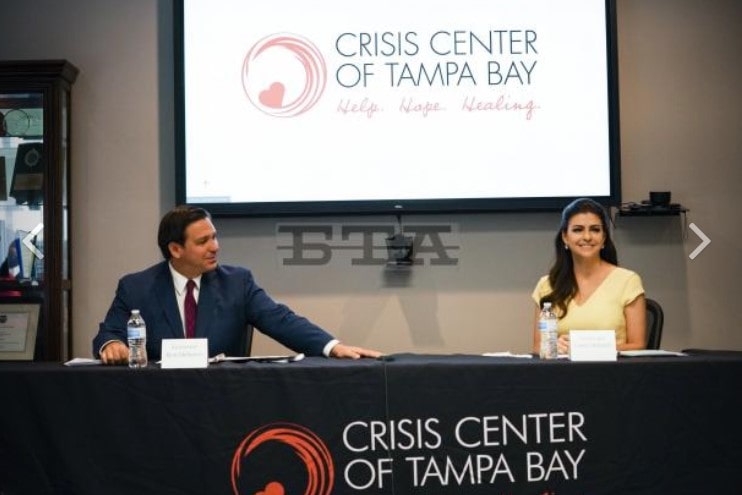 Mental health service providers are anticipating an increase in need in the coming months.

Even as Florida tallies a record number of COVID-19 fatalities and the pandemic continues spreading, the DeSantis family is bringing an emphasis to mental health and the coronavirus’ hidden effect on it.

First Lady Casey DeSantis made her first public speaking appearance since the beginning of the pandemic alongside the Governor Thursday to co-host a roundtable on the psychological impacts children, veterans and everyday people have suffered in an isolated coronavirus world.

Mental health advocacy has been one of the First Lady’s passions, but she emphasized that it would be “a robust part of the conversation” as the pandemic progresses.

“People who might not necessary have ever sought help in the past, now they’re thinking to themselves, how do I do this, how do I go and access the help that I’ve never had to research before, and finding that simplistic way for people to be able to get meaningful help,” she said at the Tampa panel.

Gov. Ron DeSantis noted that there are several underlying effects to the pandemic, including people fearfully avoiding hospitals, leading to worse cases of stroke and heart conditions. And in nursing homes, loved ones have been isolated from their families, compounding the psychological effects of illness and care.

“That comes at a cost, because you’re having these real critical moments in these people’s lives, and then they’re cut off from physical presence of their loved ones,” the Governor said.

With children away from campuses amid remote education, youth have been a central focus of the DeSantis administration’s COVID-19 response outside of health care. Children’s mental health has been one of the driving factors the Governor and Department of Education’s push to make schools hold in-person classes.

Department of Children and Families Secretary Chad Poppell noted that abuse reports historically dip by a quarter in the summer months. But after classes went remote in March with little outside interaction, the department recorded even fewer reports, a sign that abuse cases are going unidentified.

But the department’s telehealth services have contributed to a 40% higher attendance rate for its services in parts of the state.

Incoming Senate President Wilton Simpson, who spearheaded legislation for accountability within the department, emphasized the role a stable community has on children’s growth. The Trilby Republican also kicked off discussion on one of the panel’s major focuses: athletics.

“We have to realize the consequences of not opening our schools back up in a safe fashion, the mental health effect it would have on all of the students, but in particularly a lot of students that depend on sports and athletics to go to the next level, to go to college, to help bring discipline to their lives,” Simpson said.

D’Cota Dixon, a recent Tampa Bay Buccaneers signing who is slated to play his rookie professional football season, said sports and communities around sports have provided relationships and mentors that he otherwise wouldn’t have had.

“Oftentimes, athletics, it provides this bridge where a lot of kids who don’t have the things at home like a parent or even a model or a good neighborhood, whatever it is that they may grow up in, whatever the environment that may be lacking, I was able to afford a lot of that stuff in a controlled environment like athletics,” Dixon said.

Youth structure isn’t limited to sports, said Crisis Center of Tampa Bay CEO and President Clara Reynolds, whose organization was the host site of the panel. Students in band, theater and other performing arts are also missing out on those same communities.

And she noted that parents are having to learn how to discuss complicated topics like depression and suicide with their children who are isolating themselves.

“They were talking about suicide, and parents didn’t know what to do,” she said.

Finding hope and purpose is key for veterans reentering civilian life, according to Danny Burgess, the former Department of Veterans Affairs executive director.

“When you transition out of the military, you learn how to put a uniform on, but they really don’t teach you how to take it off, so that transition point can be very difficult,” he said.

But mental health experts are witnessing mental health effects beyond youth and veterans. Without interpersonal connections, people are losing out on the “basic building block of healthy self-esteem,” said Jay Reeve, president and CEO of The Apalachee Center.

“When that building block of community is undermined through necessary social isolation that comes with a disease like this one, what you can expect is an increase, particularly with it comes anxiety disorders,” he added.

Mental health service providers are anticipating an October and November crunch in services, accounting for the time it takes for trauma to set in. But as early as February, mental health workers saw an increase in calls with concerns about the pandemic that revealed deeper-rooted anxieties.

The Governor hoped to connect with people frightened by the pandemic and the economic effects:

“Along the way, if you need a little mental health help, we’re going to provide it,” Mrs. DeSantis said.

nextSunburn — The morning read of what’s hot in Florida politics — 7.17.20