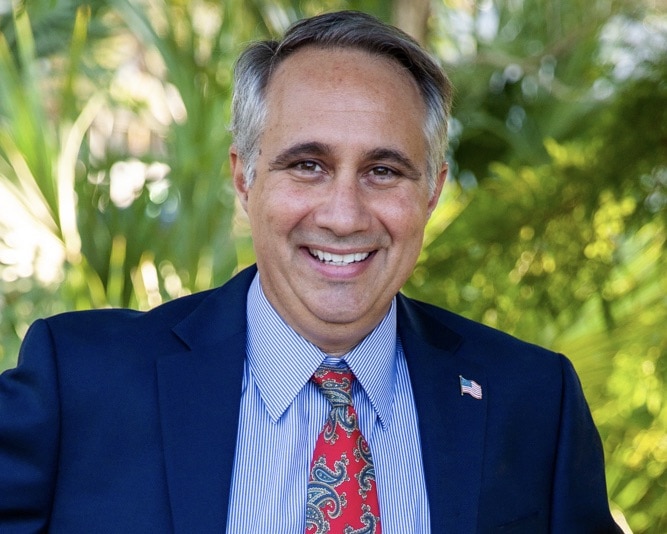 "I have a 2020Vision to share with Florida, one that says we care for the earth and for each other."

To join the fight for the health of our planet, for environmental and social justice, and equal access to health care, for our future.

As a kid I delivered the Beach Views newspaper by bicycle on Clearwater Beach.

My son is now 26, and my girlfriend and I have been together for over 4 years.

Yes, I spoke with several party activists including the Pinellas County Chair Barbara Scott and Campaign Committee Chair Lisa DesCoteaux. I initially was weighing the options to run for Congressional District 12 versus a State House seat, so I was reaching out fairly early for advice and support. I have received a lot of encouragement along the way. The reality of the numbers in the Congressional district were a major factor in my decision to seek a State House seat.

I have several people on my team including of one of my best friends from high school. His law partner offers up his campaign experience, and the two of them provide sound advice when needed. Additionally, I have other friends from high school of both political persuasions, who have reached out to me offering advice. I feel I have a trusted team of advisors with various political experiences.

One of my newer political relationships is with a fairly seasoned local activist. I consider him one of my main consultants, and he wishes to remain anonymous. I don’t have a campaign manager at this moment.

My Aunt. As a retired teacher, she believes in me.

I am inspired by Commissioner Nikki Fried because as the lone statewide elected democrat, she stands up for truth and justice in the face of possible injustices by those in control of the state. I am also inspired by State Rep. Jennifer Webb. She has an impressive grasp on the issues.

One of the reasons people mistrust elected officials at all levels of politics is the feeling that politicians are bought off by special interests. Inaction and corruption reinforces that feeling. People mistrust when they need assistance from an elected official and are unable to get help, or we see injustices not fixed. There are also other breakdowns within the system. There could be a special circumstance, or a bigger systemic failure like our current unemployment system debacle. If elected, I will work hard for the people of the district. I will not take special interest money, and will go one step further and work towards keeping big money out of politics.

– Climate Change: I am campaigning for an immediate shift in the way we approach environmental issues and climate change. It is the primary focus of my campaign. I believe in science, and I believe we need to move towards a carbon neutral economy as fast as we can to mitigate global warming, for our children, and for our future. A livable planet, with clean air to breathe and clean water to drink are worth fighting for, and 100% clean, renewable, and resilient energy is the way to do it.

– Social Justice: I have always been keen on civil rights, personal freedom, and social justice issues. We must understand racism and discrimination in all its forms to enact new laws to protect people. It is refreshing to see positive change happening today in certain areas. Police reform is the most immediate example of social justice reform we are facing as a nation. It is sad however, that tragedies have had to occur to force that change. George Floyd did not have to die, as we have been down that road many times before and should have learned. I believe we can be more progressive and forward thinking in our approach to civil rights issues. Often there are already examples and recommendations for reform, from the general public and citizen action groups, to use as guidance when crafting legislation.

– Election Security and Voter Rights: Lastly, we need to protect our vote, the cornerstone of our democracy. It is disturbing to me that in many areas of the country there are blatant moves to disenfranchise voters. We must ensure that every person of voting age has an equal opportunity to cast a ballot and have their vote counted. In addition to domestic elections issues, we are also facing threats from foreign nations. As with our Florida election debacle in 2000 of Bush v Gore, I once again agree the best way to protect our ballots is with increased citizen participation and oversight, and by increasing mandatory paper ballot audits. There are no more hanging chads, but year after year Florida seems to have problems. I will sign on to an election security bill which includes transparency and access to source code information and pre-election testing, as well as full investigations and prosecution of those found responsible for all election anomalies such as mystery “vote flips”, or other abnormalities which change the election results in any way.

I am interested in major improvements in public mass transit in the form of light and high-speed rail. Rail has always met opposition, but I believe it is time to start the conversation again. We have to look at ways to keep cars off the roads and efficient, electric, high speed rail could be really effective in accomplishing our transportation needs.

I believe the biggest thing for everyone right now is assistance with filing for unemployment. The system is broken and people need help. Additionally, as we open our economy back up, we are still very much at risk for exposure to COVID19. It is important that the information we receive from the state is truthful and accurate.

I believe Bob Graham’s influence on Florida stands above the rest, but he’s got good company with Lawton Chiles on his heels. Governor Graham’s environmental legacy and Everglades restoration efforts set the standard for environmental protections in Florida.

I would amend the Florida Constitution by adding the decriminalization of marijuana.

Yes, I’m sure yard signs are important, but I’m not a big fan of the corner clutter at election time so I’m not sure what approach I will take yet. They help with name recognition though, and that will be important in this race for both the primary as well as the general election.

The first thing I read in the morning is usually my emails. If I have time, I turn to my facebook feed for a quick glance too. I follow a number of clubs and activist groups, so it is a good source of information.

My website is electmikehenkel.com and my candidate Facebook page is Mike Henkel Democrat for Florida State House District 67.

I have a 2020Vision to share with Florida, one that says we care for the earth & for each other. It provides equal access to health care, stands up for environmental & social justice, & supports our public education system in preparing our children for a sustainable, resilient future.

Does keeping an eye on our President count? Well, when I’m not watching our national political scene, I walk, bike, occasionally hit some golf balls with friends, find a quiet spot at the beach for a swim, and love to explore our waterways on my kayak.

Soccer is my life passion and still my favorite sport. I was fortunate to be able to keep playing in local leagues into my early 40’s, which was about 10 years ago. I follow both the U.S. men’s and women’s national teams, but as a fan of regular sports I can’t say I have a favorite team per se. I love a close contest no matter what it is. Connecting to the emotions of the players during a tight game when it is all on the line triggers the competitor in me.