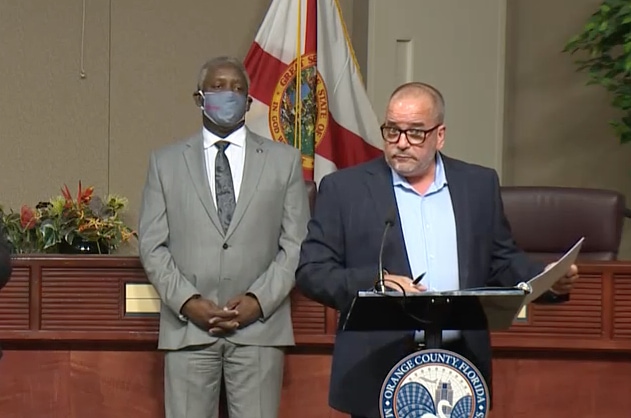 There have been no deaths reported related to the center.

An Ocoee nursing home is experiencing a “significant outbreak” of coronavirus with nearly 100 residents and staff testing positive for the coronavirus and 22 residents being sent to hospitals, Orange County officials said Thursday.

The Ocoee Health Care Center has had 66 residents and 30 staff members test positive for the virus since a first case was identified in late June, Dr. Raul Pino, the Orange County health officer with the Florida Department of Health, said Thursday during Orange County Mayor Jerry Demings‘ press briefing on the coronavirus outbreak.

There have been no deaths reported among the center’s residents, Pino said.

“We have a significant outbreak that we are following in an assisted living facility and we have some concerns,” Pino said. “We are in the process of obtaining more information.”

He said he did not yet know what the resident population is for the facility, a nursing home that boasts a five-star rating from the U.S. Centers for Medicare and Medicaid, according to its website.

Officials with the health care center did not immediately respond to a request for comment.

That news came as Pino, Demings, and Orlando Mayor Buddy Dyer expressed concerns about the rising COVID-19 death toll in Orange County, tinged with a bit of hope because positive test rates have been gradually declining in the past week.

Demings reported the county now has suffered 162 deaths. That fatality report is six higher than the number reported Thursday morning by the Florida Department of Health. Demings noted 43 of those deaths were reported just since Monday.

“That means there are 162 different families who had to unfortunately face the realties of COVID-19,” Demings said. “Because of that I think we have more believers in the science behind the pandemic.”

Pino said the rising death toll is an inevitable result of the other numbers that Orange County has seen rising over the past few weeks — first, the positive cases, then emergency room visits, then hospital admissions, then intensive care unit transfers.

Orange County’s number of cases has quintupled since June 22, to more than 25,000 cases. The number of hospital admissions started going up around June 30. The number of deaths began to climb rapidly on July 10, and has doubled since then.

nextThe global march of face masks: A mirror on humanity