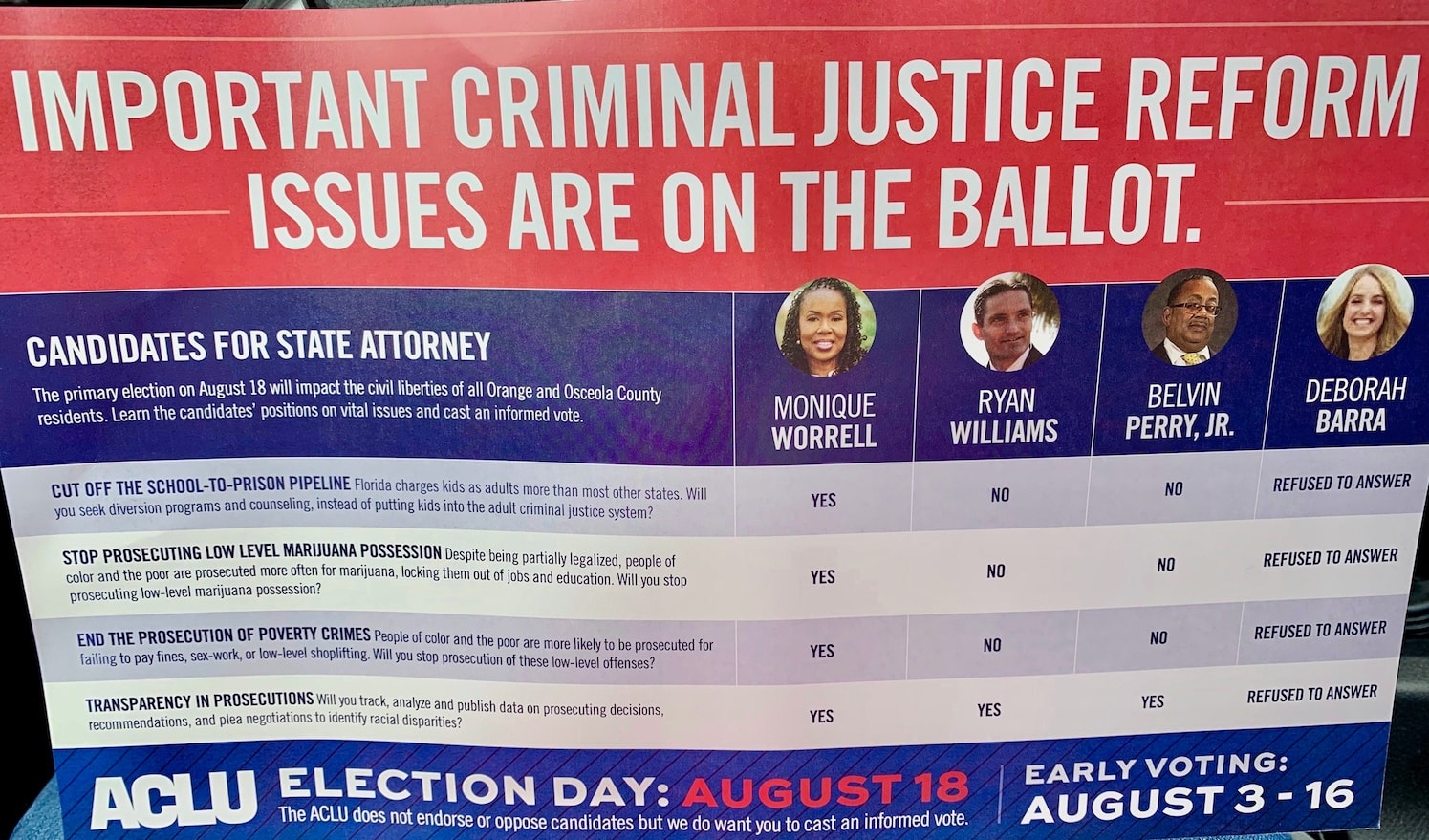 Charge the group is trying to help elect Monique Worrell.

The ACLU of Florida has weighed in on the State Attorney election in Orlando with mailers, phone calls, and texts that have three of the four Democratic candidates and others angrily accusing the organization of misrepresenting their positions on criminal justice reform.

The ACLU is standing by its efforts this week in Florida’s 9th Judicial Circuit, saying the materials it is distributing explicitly reports the candidates “Yes” or “No” answers on four key questions from questionnaires that the candidates had filled out.

In the end the mailers, the phone call scripts and texts make Monique Worrell appear to be the candidate of choice with “Yes” answers to all four highlighted points, while reporting that Ryan Williams and Belvin Perry Jr. came down with answers of “No” on three of four, and Deborah Barra “refused to answer.”

Technically true, but overwhelmingly misleading Williams, Perry, and Barra are all insisting.

“They have an agenda and that agenda is to get Monique Worrell elected,” Perry said.

“The idea that they have to spin something that is false to help get their candidate elected, I think is pretty dirty,” Barra said.

Worrell is trying to stay out of it. Her campaign already has been the target of her opponents’ ire over “outside” assistance they say she is getting for a local election. Worrell and her staff respond with indignation to those attacks, insisting they are running a strong campaign all on their own; and whatever outsiders do that to support her candidacy is their business.

The ACLU does not endorse candidates, and it says so on the mailer, which, officially, was distributed by the Committee to Advance Constitutional Values, the political arm of the ACLU.

Williams, Perry, and Berra’s ire comes because the questionnaire, the phone calls, and the texts reduce their views to Yes or No when they tried to offer detailed positions.

They each, along with Worrell, answered all the questions at an ACLU debate in June, and then often expanded on Yes or No with detailed comments in the questionnaire. Those debate answers and those comments, both Williams and Perry said, often show there was little or no policy difference between their positions and those of Worrell, and the ACLU’s campaign is reflecting something very different.

Barra said her answers at the debate were similarly expansive and clear, giving the organization what it needed, and she did not think it was necessary to fill out the questionnaire to back up what she’d already offered.

Worrell’s three opponents all accused the ACLU of unofficially endorsing Worrell and spinning answers to fit that endorsement.

Williams, Perry, and Barra are not the only ones objecting to the ACLU of Florida‘s characterizations.

“We want voters to have accurate, reliable information on our local candidates’ positions on issues that re important within the Ninth Judicial Circuit. We believe a review of the information available to the ACLU objectively shows that the ‘voter guide’ is not that,” Izquierdo, Michelle Yard, and Ali Kamalzadeh wrote.

Former Orange County Mayor Linda Chapin, still influential in the region’s Democratic politics, said she got a phone call and a text from the ACLU, and Chapin said both made statements she was certain were misrepresentations of the candidates’ positions.

At the crux are the four questions the ACLU of Florida chose to highlight on its mailer and talk about in the phone calls and texts, having to do with the “school-to-prison pipeline,” prosecution of low-level marijuana possession, prosecution of “poverty crimes,” and transparency in prosecution. Those questions were among 21 posed in the questionnaire. And Williams, Perry, and Barra said they also were asked in the debate.

Worrell checked “Yes” for all four that were highlighted. Williams and Perry checked “No” for the first three, but explained in their comments that they supported the concepts and would work toward them, and in the meantime would handle cases on a case-by-case basis as current law requires.

“If you took the time to review the transcript, you will see that Ms. Worrell, who was awarded a “Yes” to for all of the listed issues, gave the same responses to the policy questions as to the topics of the mailer,” Williams said in a written statement issued by his campaign. “If there is a difference, it’s that having actually been a prosecutor, I understand the matters enough to know that they require responses beyond a simple “Yes” or “No” and that is evident in the fact that I provided the most detailed responses of any candidate in this race, with actionable ideas, not just rhetoric and slogans.”

All four Democratic candidates could expect the ACLU, long a prominent progressive organization, to be influential in the upcoming August 18 Democratic primary. That primary most likely will decide the winner to succeed JC 9 State Attorney Aramis Ayala in serving Orange and Osceola counties. The winner advances to November, but will face only an independent candidate, Jose Torroella.

The ACLU of Florida said it stands by the information it provided voters.

“We have worked to ensure that what we provide to voters about candidates’ positions are equitable. To do this, we made all of the questions mandatory on our survey, and each candidate was asked to provide a clear “Yes” or “No” to each question, which they did. We gave the candidates the option to provide additional comments but they were not required,” ACLU of Florida Communications Director Casey Bruce-White said in a written response.

“To be as equitable as possible, we have published the answers to all of the required questions on our scorecards, as we said we would on our survey (“By submitting this survey, you give permission for your responses to be made available to the public.”) We’ve gone the extra step of ensuring voters had a way to see any additional comments that were provided by publishing each questionnaire in its entirety on our website.,” she continued.

“It is not accurate for either campaign to say that we misrepresented them,” Bruce-White said.

That was before Barra joined the other two, staunching disagreeing with that conclusion.

“It is quite evident that the forum I participated in and the answers that I gave look different from the what they reported. And even their own chapter says that,” Perry said. “The only motivation that one could reasonably deduce from that is they want Monique Worrell. They have lost all their independence, and that whole thing was a farce.”

“I have been a lifelong Democrat, an advocate for justice, and my family has donated to the ACLU, because it has always stood for speaking truth to power and seeking justice under the Constitution. Yet what they and their political committee have done under the banner of the ACLU and its reputation for truth and fairness, is to misrepresent my positions to my own electorate and ensured voters make a decision based on false statements,” Williams stated.

Though Barra concedes she never mailed back the questionnaire, she strongly objected to the wording that she “refused to answer” since she believed she already had given complete answers to all the questions at the debate. She said she’s also made her positions clear in many other forums and in her campaign materials.

“I did answer the questions. I would never not answer a question asked about one of my positions. It definitely was a mischaracterization, in my opinion, of my role in all of this,” Barra said. “And I do think they mischaracterized the other candidates as well. I don’t like that either.”

Worrell’s campaign responded to the brouhaha by stating, “We have no coordination with what outside groups do, but are proud that our campaign’s message is penetrating throughout this town and this country.”