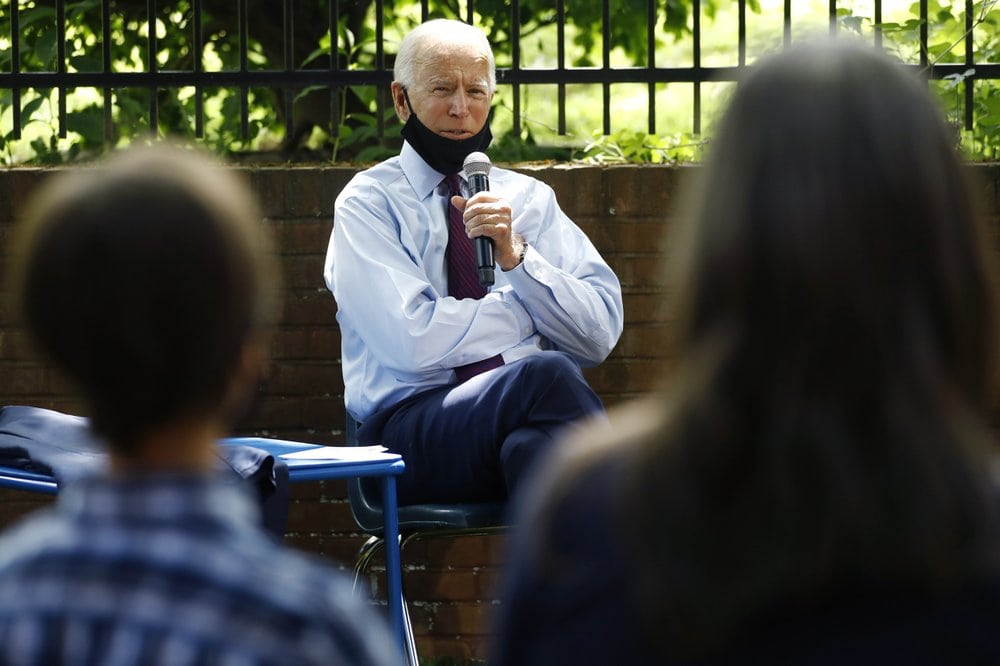 The Democrat is winning in an AP poll, but's not all good news.

The Minnesota Democrat, a 79-year-old retired nurse, preferred another candidate in the presidential primary. She also worries about Biden’s age, 77. But anxious about another four years of President Donald Trump, she says she’s willing to go to any length to ensure Biden wins this fall.

Roughly three months before Election Day, a new poll from The Associated Press-NORC Center for Public Affairs Research finds that Biden’s supporters are less enthusiastic than Trump’s — both about the campaign itself and about their candidate — although the Democrat’s coalition may be equally motivated by anxiety.

Still, the poll reveals an American public at odds with Trump on wearing masks, on balancing restrictions to stop the virus with efforts to help the economy and on fully reopening schools. And voters give Biden higher marks on many positive traits that apply to leadership in the age of the coronavirus, including honesty, capability and caring for Americans.

Sherek’s assessment of the candidates highlights the nuanced motivations underlying the so-called enthusiasm gap, which has raised concerns among Biden’s allies who worry the deficit could undermine his candidacy once voting begins.

Anya Kumar, an 18-year-old recent high school graduate from Columbia, Missouri, vowed to vote for Biden this fall but conceded many of her young friends who oppose Trump don’t feel much passion for the former vice president. Many aren’t even registered, she said.

“For the most part, people I know really just don’t want Trump,” Kumar said, acknowledging that she is motivated more by anxiety about Trump’s reelection than genuine excitement about his Democratic rival. “If Biden doesn’t win, that would suck.”

Biden’s team largely dismisses the idea of an enthusiasm gap. It says that with Trump’s level of support shrinking, a greater share of energized supporters is left behind in the diminished pool. Indeed, Trump’s job approval in the new poll sits at 38%, within the narrow range that has endured throughout his presidency but down from relative highs earlier this year.

Just 32% of voters approve of the way Trump is handling the pandemic, a low point that follows a steady decline from the outset of the crisis. While Trump’s supporters almost unanimously approve of his performance overall, 2 in 10 disapprove of his response to the pandemic.

Stacey Rogus, 43, a Republican from Glendale, Arizona, who works in the medical industry, admitted some concerns about Trump. She says the president is narcissistic, doesn’t act as “presidential” as she’d like and doesn’t think before he speaks. But Rogus is determined to vote for him a second time because of his economic policies and support for the U.S.-Mexico border wall.

She also suspects that Trump’s political opponents are exaggerating the threat of the coronavirus pandemic to hurt his reelection. She finds the timing of the outbreak “a little odd.”

“He didn’t make the virus,” Rogus said. “If anything, maybe the Democrat party created it just to make him look bad.” (The Office of the Director of National Intelligence has ruled out the virus being human-made and noted that is the scientific consensus as well.)

The poll also found that voters generally prefer Biden’s character and values. About 6 in 10 registered voters say that values like “cares about people like you,” “honest” and “strong leader” do not describe Trump well. By comparison, roughly the same majority say those characteristics describe Biden at least somewhat well.

And in considering whether the two are “capable” — a question that likely reflects voters’ views of each man’s mental acuity and ability to govern — fewer say that describes Trump than Biden at least somewhat well, 43% vs. 56%. Trump, who’s 74, and his allies have made attacks against Biden’s age and cognitive ability a centerpiece of their message.

For Biden, a significant age gap within his coalition drives the lukewarm ratings. Older Biden supporters are much more likely than those under 45 to say such traits describe Biden very well.

Terrance Berinato, a 72-year-old Democrat from Front Royal, Virginia, who said he’ll definitely vote for Biden and describes Trump as “the worst president we’ve ever had, period.” He acknowledged that Trump supporters may be more excited about their candidate, but he predicted it wouldn’t matter given that Trump’s overall support is shrinking.

“I’m sure Trump supporters, the 30% or 40% of people who would follow him to hell, are very enthused,” Berinato said.

The AP-NORC poll of 1,057 adults, including 922 registered voters, was conducted July 16-20 using a sample drawn from NORC’s probability-based AmeriSpeak Panel, which is designed to be representative of the U.S. population. The margin of sampling error for all respondents is plus or minus 4.3 percentage points.