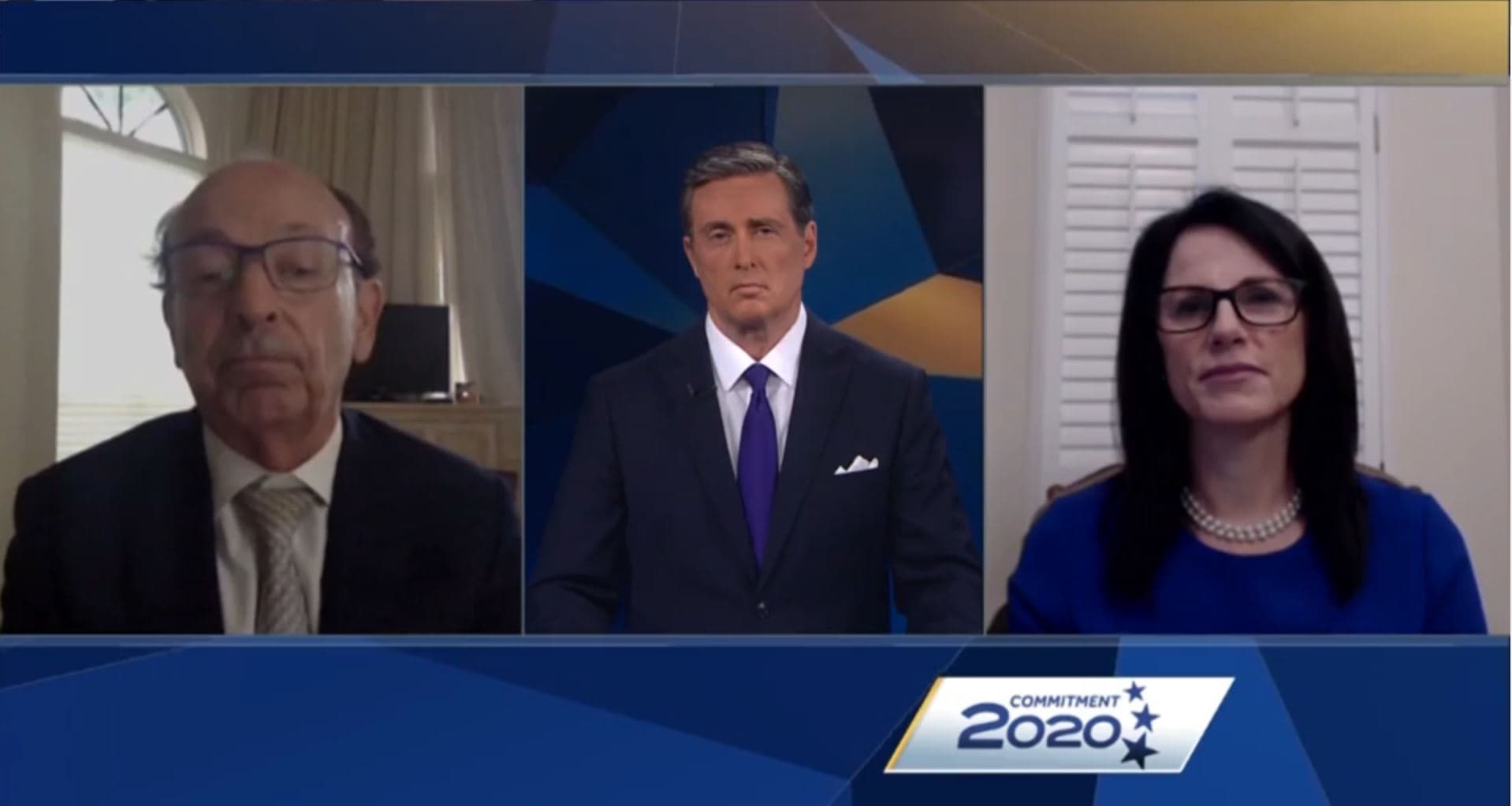 The virtual debate was hosted by WPBF.

“She doesn’t understand anything that she’s talking about.”

Those comments from former Rep. Irv Slosberg summed up a large portion of his debate performance Tuesday night, as he sought to tear into his opponent, Tina Polsky, over attacks leveled at him by political committees tied to Polsky.

Slosberg’s counter-offensive also contained some factual errors and was deemed “patronizing and demeaning” by Polsky as she defended her criticisms over Slosberg’s former registration as a Republican and his voting record on gun issues.

The virtual debate between the two Senate District 29 candidates was hosted by WPBF.

At issue were mailers and ads paid for by Americans for Progress and Citizens for Integrity in Government, two PC’s supporting Polsky’s bid.

As recapped by the Palm Beach Post, “The mailer and commercial are based on votes Slosberg made on gun bills in 2011 and 2014. Slosberg did not deny his votes on the bills, both which contained pro-gun language, but added that one vote he cast on procedural grounds and, on another, he voted in line with the Democratic delegation in the House.”

“Everything that is put out by myself or a political committee is verified. The citations are there,” Polsky argued Tuesday night.

Slosberg disagreed, asserting her would never support allowing guns in schools as was claimed in the commercial pushed by Citizens for Integrity in Government.

As for his former registration as a Republican?

“I was a Republican 23 years ago. Is that a crime to switch parties? I saw the light,” Slosberg said near the top of Tuesday’s debate.

“She took a page out of Donald Trump’s playbook. She’s a liar. Tina Polsky is framing this race with negative and false campaigns.”

Both candidates tried to position themselves as the “positive” candidate in the race. “We need people who will be straight with you and offer a positive way forward,” Polsky said of the SD 29 race. Both, however, had plenty of harsh words for the other.

“How many negative ads has Irv Slosberg put in anyone’s mailboxes?” Slosberg asked, referring to himself in the third person before turning to Polsky. “Zero. None. Do you know why? You have done nothing. You haven’t passed a bill.”

Polsky again stuck to her guns.

“The truth is the truth, and to say that I’ve done nothing is horribly patronizing and demeaning to my service over the last two years,” Polsky said.

She added, “There is nothing negative to say about me and that’s why you haven’t. But you have a very long voting record and I think it’s important that the constituents know.”

The two Democrats are vying for that party’s nomination after former Sen. Kevin Rader balked at running for reelection in the district. First-time candidate Brian Andrew Norton has also filed as a Republican.

The district leans left, however, meaning the winner of the Polsky-Slosberg primary on Aug. 18 will have a big advantage in the general election.

WPBF’s Todd McDermott moderated Tuesday’s debate and led off with a question about how the candidates would handle the COVID-19 outbreak.

Both Polsky and Slosberg agreed on several broad strokes such as making testing more accessible and instituting a statewide mandatory mask order.

Polsky attempted to frame her current tenure in the House as putting her in a better position to continue responding to the crisis. Slosberg hasn’t served in the Legislature since 2016.

“This is a true crisis and every single legislator is dealing with this right now,” Polsky said.

“The next state Senator will not be in office until after November, and so we need someone who is on the ground, dealing with this pandemic right now who can help with her constituents when we get to Tallahassee after 2021.”

Polsky argued she is “ready to go” with bills aimed at addressing the state’s faulty unemployment system and providing resources to residents of the district.

She also had an interesting prediction regarding the 2021 Legislative Session.

“I think we’re going to see a Session in Tallahassee like we have never seen before,” Polsky said.

“In fact, it could be that all we do is the budget because that is such an important issue and we could still be in the midst of the pandemic. So we really don’t know what is it is going to look like in the early part of 2021 when we go back to Tallahassee.”

Polsky was then asked how she would dig Florida’s economy out of the hole.

“I would suggest that we remove the corporate tax cuts so that we have more revenue flowing into the state and I would also suggest that we don’t use the money — hundreds of millions of dollars — that was spent this past year and will be spent in the future on the toll road to nowhere.”

Given the same question, Slosberg then turned his guns on Polsky’s inexperience as a freshman legislator. Though Slosberg has been away from Tallahassee, he has more than a decade of time serving in the House.

“Ms. Polsky, she doesn’t understand the budget at all because she is assuming that she knows the numbers when she doesn’t know the numbers. It’s just impossible.”

That prompted Polsky to push back.

“I find it quite demeaning and patronizing to say I have no experience. I’m the sitting Representative. I voted on the budget multiple times, secured appropriations for my district — especially for the areas of the glades that this future Senator will represent.”

Slosberg wasn’t letting the issue go, however, and instead broadened his attack.

“The revenue estimating committee comes out with a global number and after you get the global number, then you have to figure things out,” he continued. “Again, Rep. Polsky only knows how to live about what she’s doing, telling lies, putting nonsense in people’s mailboxes about me.”

The two also faced questions about racial unrest that has spread across the country following George Floyd‘s death at the hands of Minneapolis police.

Both candidates pitched a ban on cops using choke holds. Polsky added she would encourage an raise public school funding to increase opportunity for poorer youth.

“I think it is a combination of police reform, more funding for mental health, and better education all around,” Polsky said.

Slosberg said he would use a slightly different approach.

“I suggest that the state starts a racial equality task force to come up with suggestions on how the state can create public and private partnerships that will help dismantle systematic racism,” Slosberg said. “We also need to look at retraining law enforcement.”

When it came time for closing statements, Slosberg was back into attack dog mode.

“There’s a stark difference here,” Slosberg argued. “Do you want a legislative machine with 12 years of experience or do you want a rookie who is a liar? Sounds like Donald Trump to me.”

While both candidates brought the heat during the course of the half-hour debate, Polsky attempted to take the high ground in her final remarks.

“Before I close, I’d like to be very clear about something. My opponent, former Rep. Irv Slosberg is a good man. He suffered an unimaginable tragedy in his life and he should be commended for channeling his grief into public service and helping our traffic safety,” Polsky said.

“But we obviously have disagreements about how we have conducted ourselves as Representatives. I will never bow down to the NRA. Never. The gun lobby will never be welcome in my office.”