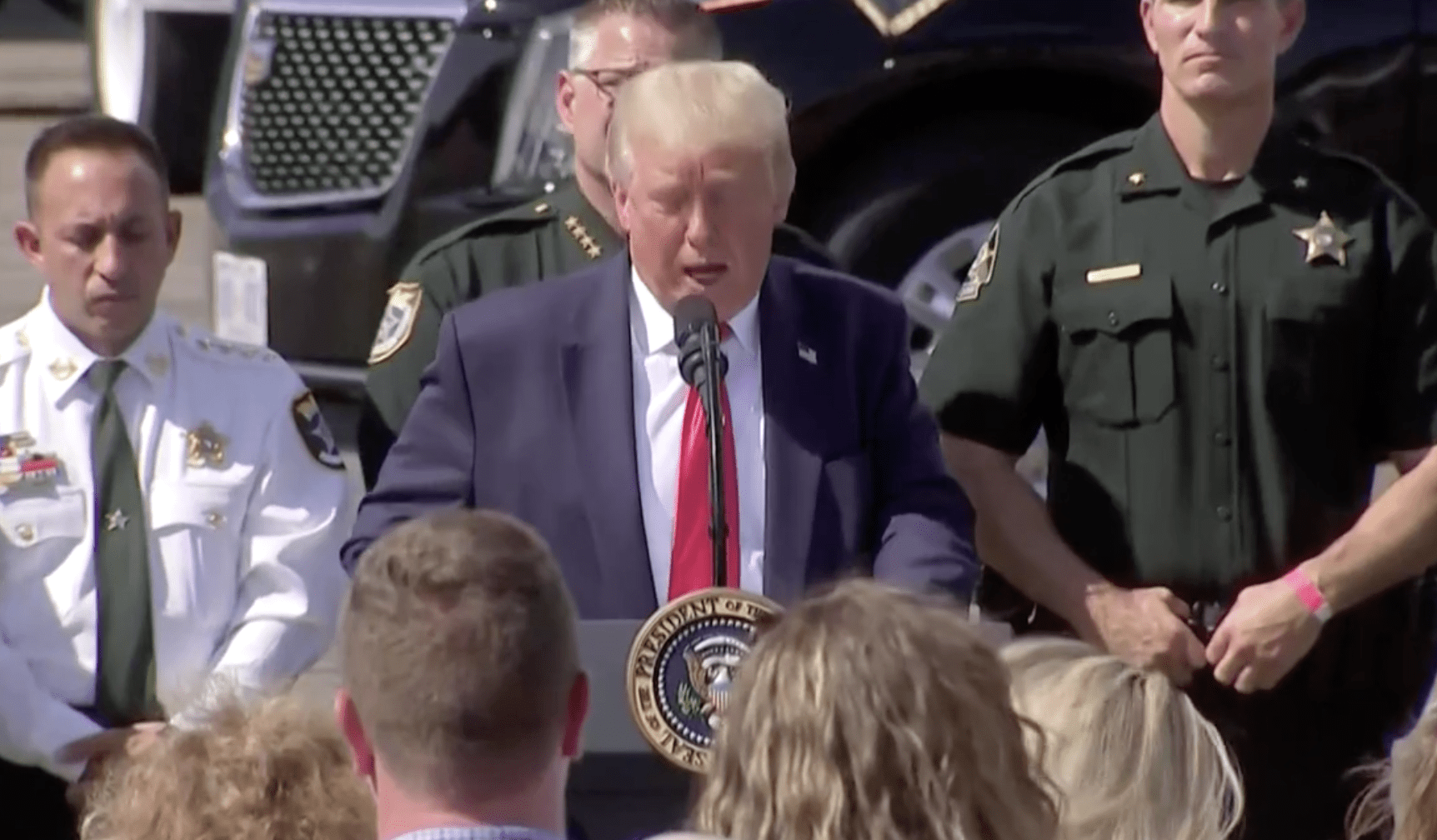 President Donald Trump was in Tampa Friday afternoon for a campaign fundraiser, speaking to donors on a tarmac at Tampa International Airport to accept an endorsement from Florida sheriffs.

Tickets to the event were $5,600 with those contributing $100,000 given access to a roundtable discussion also in the area.

A small group of about 100-200 supporters attended to hear Trump speak.

“There’s a big love affair between us and law enforcement, and it’s especially great in Florida,” Trump said.

With the COVID-19 pandemic still growing nationwide and his approval rating tanking over the issue, Trump is trying to refocus the campaign on law and order, highlighting “professional anarchists” in Portland, Oregon, and calls to defund the police.

The event came amid pushback from Democrats who argued Trump shouldn’t be using a Tampa stop to fundraise as Florida faces not only an ongoing crisis with the COVID-19 pandemic — Friday was the fourth straight day Florida set a new record for the number of deaths reported in a single day — but as the state prepares for Hurricane Isaias, which could make landfall somewhere in the state this weekend.

It didn’t appear any of the supporters were wearing masks or facial coverings. Trump, as well as supporters lined up behind him from the Pasco and Brevard Sheriff’s offices, also did not wear masks. Sen. Rick Scott, who flew with Trump on Air Force One and joined him at the roundtable later, did wear a mask.

Trump addressed the hurricane, urging supporters to be cautious.

“I don’t know if it’s going to be a hurricane or not,” Trump said.

The storm strengthened into a hurricane overnight, hours before Trump’s visit.

His message hit on all his campaign favorites like gun control and the border wall, and also continued his long-standing tone criticizing those with whom he disagrees.

“American families will be at the mercy of the violent left wing mob that you’ve been watching on television,” Trump said, referring to people protesting police brutality nationwide.

Trump rallied against the push to defund the police.

“There will be no safety, no security, no peace, no justice, no one to protect you and no one to defend the American way of life.”

And he railed against “professional anarchists” in Portland, Oregon, who he said used bricks, cinder blocks, fireworks, explosives, and more creative hidden weapons like frozen water bottles and soup cans.

“If you saw it down here, they wouldn’t be throwing it long,” Trump said.

The President hit his predecessor’s administration and his 2020 challenger for their handle on organized crime. But Trump also rehashed concerns about Biden’s mental preparedness for the office, going off script after saying the former Vice President has slandered police.

“Don’t take it personally,” Trump said, turning to sheriffs behind him, “because he has no idea what he’s talking about. Just reads whatever they put. They put it there, and he reads it. Sometimes he reads it and sometimes he doesn’t. Pretty soon, he won’t be able to do that either.”

He promised that under four more years with his administration, law enforcement would be fully supported before launching into claims that cities under Democratic control have rampant problems with crime.

Tampa, where he was speaking, has a Democratic Mayor and all members of its City Council are Democrats.

It’s not peanuts on paper, though. Tampa, for example, spends 62% of its total general operating budget on public safety. That includes $162.7 million, 37% of the general fund, for the Tampa Police Department.

The defund police movement, for most who support it, is not about completely removing all funding for law enforcement, though few do believe that should happen. Rather, movement supporters want to reallocate some public safety funding for other services, like mental health.

Nocco, speaking against the movement, argued full police funding was needed so law enforcement could respond to things like mental health and substance abuse.

“Those are people that we deal with every day,” Nocco said.

But in doing so, he might have made the defund police camp’s point.

And Ivey, who said he has been in law enforcement for over 40 years, circled back to law and order.

“I’ve never seen a time with challenges like our country faces today, a time when all of a sudden there are those that suggest defunding the police, going soft on crime and, even worse, that it’s OK to commit acts of violence and looting simply because they oppose law and order,” he said.

Some cities, like St. Petersburg just across Tampa Bay from Trump’s Friday fundraiser, have already embraced reallocating some police funding. St. Pete repurposed federal grants meant for hiring new police officers to instead hire trained mental health and crisis responders to handle non-violent calls to service, a move Police Chief Anthony Holloway said was a loss to the department in terms of uniformed officers, but that was balanced out by the reduction in calls officers would be expected to handle.