Florida CFO Jimmy Patronis had a good week. The Miami Marlins and Quinnipiac polling did not. And could we one day say Governor Anna Eskamani?

Sure, it started with a hurricane. And COVID-19 cases still rampage through the state, but at least we’re one month closer to the end of this wretched year.

Let’s keep it positive, shall we? We’ll do our best.

Despite the yappers who consider going maskless a divine expression of FREEDUMB BABY, a recent poll showed that three out of four Americans favor requiring people to wear masks in public places.

President Donald Trump’s trial balloon about postponing the election was quickly squashed from both sides of the aisle. And despite Trump’s drivel about voting by mail, expect record numbers of people to do just that.

Many of those people will vote for him.

The NBA season resumed in Orlando while hockey started back up in Canada. Interestingly, both sports use the “bubble” concept to keep the nasty virus away, and it’s working.

But let’s get to our weekly game of winners and losers, shall we?

Honorable mention: Rick Scott. Floridians know better than to underestimate him.  So, everyone must take his apparent interest in the White House for 2024 seriously.

Toward that end, The Wall Street Journal reported that Scott is angling to chair the National Republican Senatorial Committee for the 2022 midterms.

The Journal called that “a plum post that would put him in close contact with top Republican donors and finance chairs around the country as he mulls a potential presidential run in 2024.”

The vote for that position comes after the November election.

The almost (but not quite) biggest winner: Anna Eskamani. Like her or not, the unabashed progressive state Rep. from Orlando clearly is a force in the Florida Democratic Party.

How big of a force?

As Florida Politics’ A.G. Gancarski cleverly noted, she may be a Yes-kamani in 2022 as Democrats try to win the Governor’s mansion for the first time in this century.

Dems, of course, went the progressive route in 2018 with Andrew Gillum. Despite Gillum’s many flaws and campaign errors, he lost by only 52,000 votes. He also received more votes than any previous Democratic gubernatorial candidate.

With better strategy and perhaps some voter fatigue with Republican rule, the door could open wide for someone like Eskamani.

Too soon for her, you say?

Don’t we always say that when new faces appear on the scene?

But that’s theoretical for now. And it’s not quite enough to get her the top spot this week.

With the moratorium on policy cancellations set to expire on Aug. 15, Patronis got involved. Citizens agreed with his urging to extend the moratorium through the end of 2020 – well past the end of the hurricane season.

“Our top priority has been and will continue to be our policyholders,” Citizens President Barry Gilway said. “This extension will provide our customers with further assurances that we have their backs during hurricane season and beyond. I thank CFO Patronis and (Board of Governors) Chairman Bo Rivard for their input and support.”

After the recent Twitter hack, he also asked state law officials to investigate the potential financial damage a breach like that can have on Floridians.

“Given the prolific nature of the use of Twitter and other applications as important communications systems used by state and local officials for dissemination of official information, this catastrophic security breach has far-reaching implications,” he said.

On Friday, law enforcement officers arrested three people in the attack, including two from Florida.

Dishonorable mention: The Miami Marlins. A couple of days after Major League Baseball restarted its season, Marlins players started testing positive for COVID-19. By Friday, that number of infected players and coaches reached 29.

Scott Miller of Bleacher Report cited an internal MLB investigation that found the Marlins were “very lax” in following safety protocols during a trip to Atlanta last week. The investigation found that players were hanging out in the hotel bar in clusters as well as going out in crowds.

As virus cases continued to increase, Commissioner Rob Manfred warned he will shut down the season completely if teams don’t get this under control.

According to ESPN’s Keith Olbermann, “Networks broadcasting MLB games have been alerted to look at possible alternate programming after this weekend should the league shut down.”

Thanks a lot, Marlins.

Not only do you lose a lot of games, but now you’ve even lost face.

Almost (but not quite) biggest loser: Heather Fitzenhagen. You know things aren’t going well when your campaign triumphantly releases an internal poll that shows you’re down by “only” 22 points three weeks before the Aug. 18 primary.

But that’s what Fitzenhagen did in her race against Ray Rodrigues for the Republican nomination to represent Senate District 27.

As if that wasn’t enough, the internal poll included this statement: “the Everglades Foundation and other groups who work to improve Florida’s water quality oppose Ray Rodrigues because they know Sugar Ray is dangerous…”

Alas, that statement drew this rebuke.

That’s bad. But it’s still not enough to earn the bottom spot on the loser side.

The biggest loser: The Quinnipiac University poll. Even the most ardent supporters of Democratic presumptive presidential nominee Joe Biden don’t believe the Q-poll that has him 13 points ahead of Trump in Florida.

“For whatever reason, the Q-poll seems to miss the mark more often than not, and typically in a way that breaks our Democratic hearts,” Florida Democratic consultant Dan Newman told POLITICO.

In the same story, Ryan Tyson, founder of The Tyson Group, said, “I don’t even look at them anymore. They are not really tied to reality.”

Much of the skepticism dates to Q-polls in 2018 that on the eve of the election had Democrats Gillum and Bill Nelson ahead by seven points in their races. 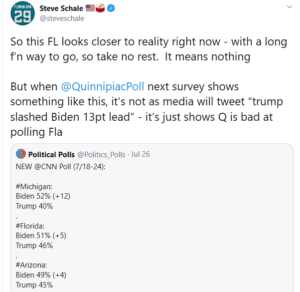 The poll’s credibility was best summed up by veteran Democrat and Biden supporter Steve Schale.

When a CNN poll put Biden ahead in Florida by five points, Schale tweeted: ‘So this FL looks closer to reality right now … -it  just shows Q is bad at polling Fla.”

previousIsaias at tropical storm strength and will be around until Monday

nextRenomination of Trump to be held in private