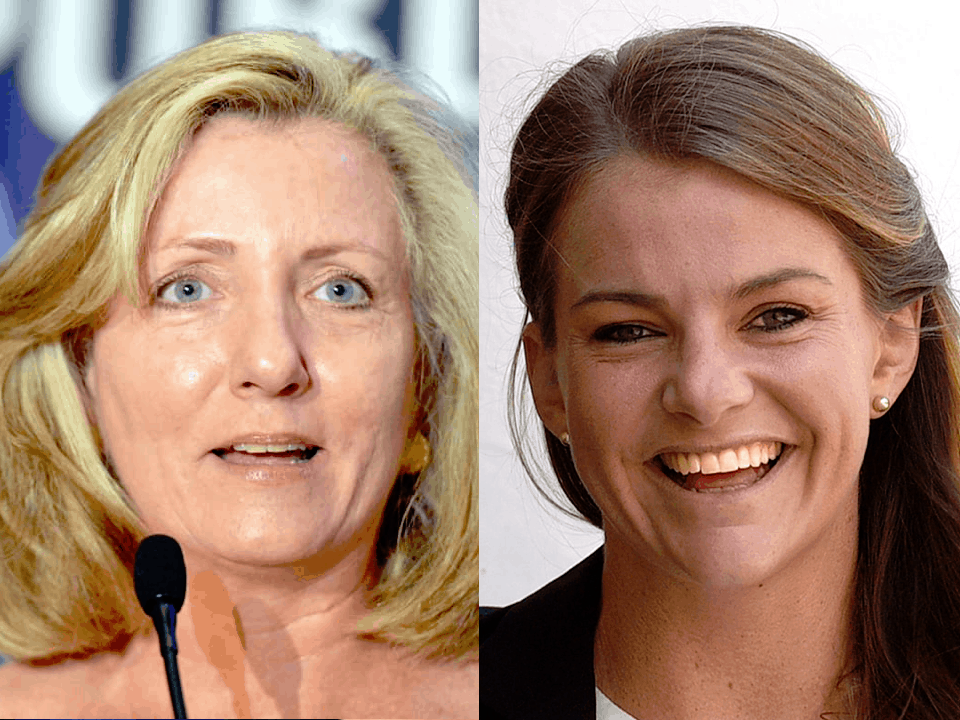 Donna Barcomb’s support for tax hikes while on the Sarasota County Public Hospital Board provides fodder for negative pieces. Meanwhile, Fiona McFarland’s work for a controversial consulting firm drew a round of attacks as well.

The two Sarasota Republicans face each other in the Aug. 18 primary.

Each camp waived off criticism as opponents miscasting their experience as a detriment instead of an asset.

For Barcomb, the attacks come in the form of grainy black-and-white photos and the label “career politician.”

“Bad for your pocketbook, bad for Sarasota.”

The basis for the attacks: votes Barcomb cast in favor of high millage rates. Barcomb serves now in her second term on the Sarasota County Charter Review Board. But before that, she served on the hospital board. Between 1997 and 2006, she cast votes multiple times either in favor of a hike or against a tax cut.

Barcomb’s campaign dismissed the attacks as out of touch with the region, one that prides itself on putting a high value on medical care.

“Sarasota as of last week had one of the best hospitals in the world,” said Anthony Pedicini, Barcomb campaign consultant. “The journey to get to that point started when Donna Barcomb took over the hospital board.”

“But Fiona McFarland doesn’t understand this because she’s not from Sarasota, let alone Florida.”

McFarland’s recent arrival in the region has been the subject of various attacks. But the latest mailers from the Barcomb camp also question what she was doing before arriving here. Her financial disclosures show her source of income last year came working for consulting firm McKinsey & Company.

One mailer shows a picture of “Phony Fiona” beside a hammer and sickle noting the controversial firm’s work on behalf of China lobbying to allow more manufacturing jobs overseas.

The Barcomb camp even spent money on  campaign literature targeting overseas voters that notes Chelsea Clinton, the daughter of former President Bill Clinton, and Pete Buttigieg, a former Democratic candidate for President both worked for the firm.

That’s not to say the firm’s record pleases Democrats all the time. Buttigieg’s campaign was dogged by questions about the company, which has lobbied for Saudi Arabia and the makers of Oxycontin.

But the firm is also massive. McFarland’s team waived away suggestions she was helping lobby for China while stationed with the Navy in the South China Sea protecting U.S. assets.

“Last week, Donna Barcomb denigrated McFarland’s active-duty service to our country in the Navy,” Grgic said, referencing an attack on McFarland being stationed in California.

“This week, she’s attacking McFarland for working at the same business consulting firm as Republican U.S. Senator and former Army Captain Tom Cotton. Barcomb’s utter disrespect for our brave men and women in uniform is disturbing and will be thoroughly rejected by the people of Sarasota.”

The race in the final weeks leading into the Aug. 18 primary turned increasingly combative. But it’s one of the highest stakes House races in Florida this year, as an open seat now held by Democrats but where voters favored Donald Trump over Hillary Clinton by 14 percentage points.

Barcomb’s campaign has clearly stepped up mailers, though it just reported $1,063 in spending in the last period from July 18 to 24; Pedicini acknowledged being behind with billing and said spending will show up in the next period. The campaign reports about $68,715 in cash on hand after raising a total of $93,190.

McFarland has raised considerably more, about $208,083, but has been spending five figures a week of late. The campaign reports $48,774 in cash left.

The race has felt like a Barcomb-McFarland contest since early 2019. Of course, if there’s any other beneficiary to the mail war possible, lawyer Jason Miller is also running in the GOP primary. He has only raised a $9,708, and has dipped into his pocket as he has spent $13,745. But the low profile means no one appears to be spilling ink on mailers denigrating him to primary voters. 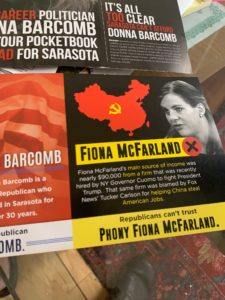 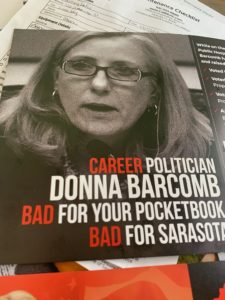