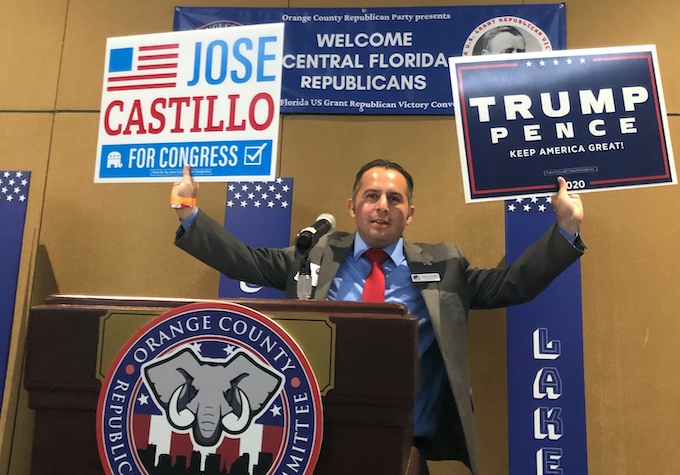 Straw poll results are in; here are the results.

The poll came after most Republican candidates appeared and spoke at the convention, which drew just shy of 100 people at the Rosen Plaza Hotel. The event had been postponed from the spring due to the coronavirus crisis.

Zhao got the crowd’s backing for his campaign in Florida’s 7th Congressional District, with 60% of the straw poll vote, after he gave what some in the audience said was one of the most passionate speeches of the night for conservative politics. He topped Richard Goble, who drew 24%. A third CD 7 Republican candidate, Dr. Leo Valentin, was a no-show due to a family emergency, and got 16%.

The winner of that primary will face Democratic Rep. Stephanie Murphy of Winter Park in November.

Castillo took 56% of the vote after he spoke. His August 18 Republican primary opponents, Bill Olson and Christopher Wright were no-shows citing Hurricane Isiais’ looming threat. Wright, who’d been called to report to Army National Guard duty, finished second with 37% of the vote.

The winner of that primary will face Democratic Rep. Darren Soto of Kissimmee in November.

The winner of that primary will likely face Democratic Rep. Val Demings of Orlando in November, unless Demings has to withdraw from that contest to be former Vice President Joe Biden‘s running mate.

The Orange County Republican Executive Committee only put candidates on the ballot if they registered for the convention. Thus, some contests, such as Florida’s 8th Congressional District, were not featured in the straw poll. Nor were some Republican candidates.

previousCOVID-19 deaths up again in Florida after weekend lull