In Florida, we know it’s possible to simultaneously win and lose. We see it all the time.

The latest example is the $135 million contract the state gave Deloitte to revamp its Medicaid website.

So, how can a company that stuck taxpayers with a loser $77 million system that exasperates jobless people seeking their just benefits score another big piece of Florida’s pie?

Deloitte beat out four other bidders to modernize the Medicaid database for the Agency for Health Care Administration, that’s how.

Gov. Ron DeSantis must see Deloitte gremlins that look like Rick Scott in his nightmares by now. He doesn’t sound happy about this latest turn of events.

“I’ve not been involved. I don’t like it. Obviously we’re investigating the unemployment.”

That system’s main function is to Just Say No.

DeSantis famously said the system is “designed to fail” among other things.

But on we go to our weekly game of Winners and Losers.

Honorable mention: New Yorkers. Gov. DeSantis rescinded the travel restrictions on visitors from the Gotham state, along with those from New Jersey and Connecticut.

Previously, travelers arriving here from those places had to quarantine themselves for two weeks. The Governor grumped that New Yorkers, et al, were partly to blame for Florida’s skyrocketing infection rate.

Those states took aggressive steps to control the virus, and New York Gov. Andrew Cuomo declared that schools throughout the state can reopen for in-person classes.

Of course, hoping that New Yorkers will decide that visiting Florida in the middle of hurricane season while temperatures routinely stay in the mid-90s or higher is another matter.

Almost (but not quite) biggest winner: Scott Franklin. The Lakeland City Commissioner’s bid to oust U.S. Rep. Ross Spano in the Aug. 18 primary for CD 15 is already riding momentum. It picked up some more when U.S. Rep. Matt Gaetz endorsed him.

What’s the big deal about that?

Spano and Gaetz are both Republicans and members of the Florida delegation. For one sitting House member to turn on another from the same party and state is, well, unusual.

“I am honored to be here supporting Scott Franklin for Congress. Scott is a business leader, he has worked in local government in Central Florida, and he answered the call to serve our country in uniform,” Gaetz said after traveling to Lakeland for the announcement.

“Scott is the right person to ensure that President Trump has the strongest possible campaign in the state of Florida and particularly here on the I-4 corridor, some of the most important political geography in America.”

Investigations into illegal loans to Spano’s 2018 campaign continue to hang over his re-election effort. Democrats consider this district winnable, and the endorsements by Gaetz and Judd underscore GOP concerns that they may be right.

That’s good, but not good enough to be the biggest winner.

The biggest winner: Republican Party of Florida. The state GOP scored a big coup when President Donald Trump said that voting by mail in Florida is fine with him.

Trump, of course, spouts a baseless and fact-deprived theory about voting by mail. It’s a devious plot, you know, to rob him of the election.

But he had this to say about Florida, his adopted home state (where he voted by mail in the March primary):

In April, Trump began his crusade in earnest against vote-by-mail.

That may be especially true this year as Florida continues its lengthy battle against COVID-19. Senior citizens, a key Republican constituency, are particularly vulnerable.

During the 2018 election, 2.6 million Floridians voted by mail, and that number likely will increase this year.

The Tallahassee Democrat reported that Republicans gained 377,196 voters since the 2016 general election compared to 290,181 for Democrats. That could be significant in statehouse and county races as the GOP tries to maintain its virtual monopoly in state government. Florida Politics also that the Republicans out-registered the competition by 14,437 in Volusia County.

Even with that, Democrats continue to lead with 5.1 million registered voters in the state compared to 4.9 for Republicans. The key group: more than 3.6 million voters with no party affiliation.

Dishonorable mention: A misguided Food and Drug Administration policy. Democratic state Rep. Shervin Jones was turned away when he tried to donate plasma at a OneBlood truck.

The problem: An FDA rule called the Men Who Have Sex With Men (MSM) policy. Enacted during the AIDS crisis in the 1980s, it mandated that no gay or bisexual man could ever donate blood.

Five years ago, the FDA reduced the waiting period to 12 months provided donors had not had sex during that period.

In response to the desperate need for plasma wrought by COVID-19, it reduced the wait to three months. That still didn’t help Jones, who is openly gay. He couldn’t say he hadn’t had sex with a man during that period. OneBlood had to tell him thanks, but no thanks.

Accepting the donation could have jeopardized OneBlood’s accreditation. That holds even if the donor is in a monogamous relationship.

This all took place in the parking lot of a Pembrook Pines church where Jones’ father is the pastor.

“It’s 2020 and this is still the narrative?” Jones told the Miami Herald. “It’s unfortunate.”

Almost (but not quite) biggest loser: Darren Beattie. Beattie is a speechwriter for Gaetz, who always seems to be in hot water. The temperature spiked recently after the New York Times tweeted about a march in Berlin to protest official mandates to combat COVID-19.

Beattie retweeted the Times’ missive, and added the word “Beautiful.” 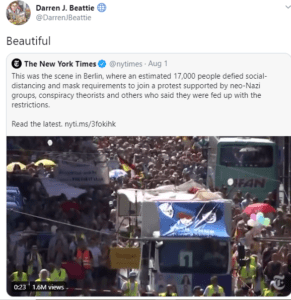 Beattie used to serve on the White House speechwriting staff.

He left there – well, got canned – for appearing on a 2016 panel at the Mencken Club with the founder of VDare.com. VDare is named for Virginia Dare, the first white person born in North America. The Southern Poverty Law Center describes VDare as  “a blatantly racist website and a hub for white nationalists.”

Gaetz is already facing an ethics investigation. Lawmakers question his use of taxpayer money to pay Beattie $28,000 through Beattie’s limited liability company. Under House rules, Beattie should have been added to Gaetz’s congressional payroll.

But someone always manages to clear the high bar to become the biggest loser.

And this week that goes to …

The Biggest Loser: Richard Corcoran. For several hours on Thursday, medical experts lined up before the Hillsborough School Board and said opening in-person classes now is not a good idea.

The Board voted accordingly, opting to delay the start of in-person classes for four weeks, only to find Corcoran overrode that order late Friday afternoon.

Corcoran, the state’s Education Commissioner, is playing political games with people’s lives. While no one doubts in-person instruction is best for students, let’s get one thing clear: THIS VIRUS KILLS PEOPLE!!!!!

Let’s also not forget that in Georgia’s largest school district, schools are struggling to maintain staff after 260 staff members had to quarantine because they either tested positive for COVID-19 or had direct contact with someone who had. That happened just one day after students returned to classrooms. Another Georgia district decided to start school online after 90 employees were forced to quarantine.

Corcoran’s disdain for public school teachers is well-documented but this is a bridge too far.

Republicans like Corcoran love to rail against top-down edicts from Washington about what individual states should do. Why does that not standard apply for Hillsborough, the seventh-largest district in the nation?

Whatever you say, goes.

Here’s a prediction: If Corcoran gets his way, there won’t be enough teachers reporting to work in Hillsborough to cover all that in-person instruction he demands. Some will use their accumulated sick time while others might take a leave of absence.

Others will simply leave the profession.

There could be chaos, and it’s all because Corcoran had to have his way to stop FOUR WEEKS of online instruction.

nextVote-by-mail worries: A ‘leaky pipeline’ in many states