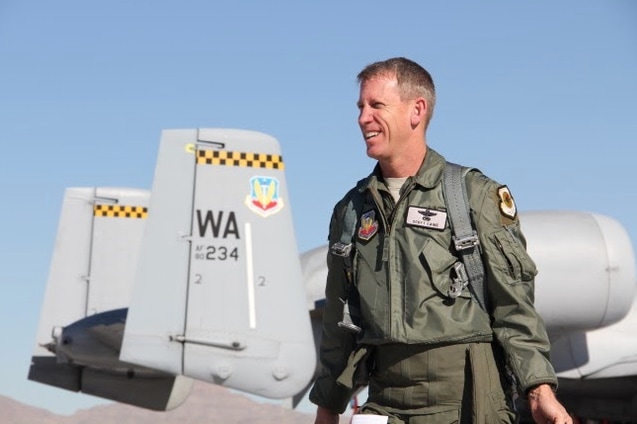 Republican congressional candidate Scott Caine on Tuesday released what he calls his “Flight Plan for Relaunching America’s Economy,” a set of priorities that call for economic patriotism, promotion in telecommunications technology and American energy, and accelerated deregulation.

Caine, a retired Air Force colonel, is challenging six-term Republican Rep. Bill Posey in Florida’s 8th Congressional District serving Brevard and Indian River counties and part of eastern Orange County. Heading toward the Aug. 18 Republican primary, Caine has been trying to grab the right-wing lane, a lane that Posey maintains he has earned.

Democrat Jim Kennedy awaits in the November general election, though Republicans have a commanding advantage in the district, with 43% of the voter registration, compared to 30% for Democrats.

A handful of the things that Caine is advocating in his economic plan would be outside his control if he were elected, including reelecting President Donald Trump, winning back Republican control of the House of Representatives, term limits for Congress, and getting “our kids back in the classrooms.”

His campaign maintains his role with those would be more of a bully-pulpit matter, offering leadership and advocacy to promote them.

“China would love nothing more than our kids to have a lost year of education that could hurt us for decades,” Caine’s economic paper explains on the latter point.

Other points would be within an individual member of Congress’s legislative efforts:

— Taking the lead in 5G technology, protecting data, and developing a network with allies to block China’s telecommunications ambitions.

— Promoting capitalism by standing up to “this fad of socialism.”

— Securing the borders, including building Trump’s proposed wall and developing “an immigration system that works for America.”

Caine’s plan also calls for addressing what he sees as roadblocks to liberty and prosperity: China, antifa, the media, House Speaker Nancy Pelosi, and a paralyzed Congress.

Those “all fuel a radical socialist movement seeking to stifle the great engine of liberty and prosperity that our Great American Constitution and Free-market Economy produce,” Caine declares in the preamble to his economic plan.

“Simply put, today American patriotism and prosperity are in a stall and Congress is piloting us towards a nosedive.”