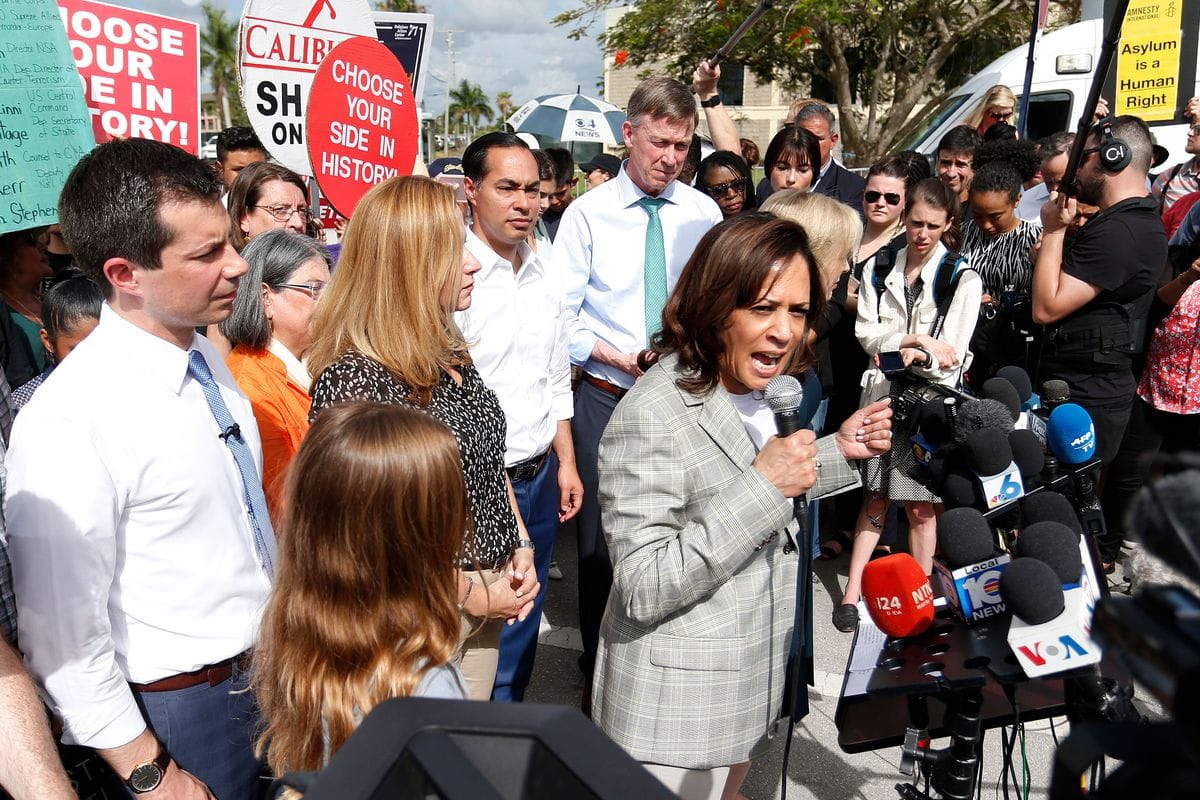 "This is a historic choice amidst many well-qualified choices on Biden’s short list."

The political world took notice after Democrat Joe Biden named California Sen. Kamala Harris as his running mate. Harris is the third woman, behind Democrat Geraldine Ferraro and Republican Sarah Palin, to be tapped for the role for a major party ticket, and the first person of color. If elected, it will mark the first time a presidential ticket with a woman on the ballot wins the White House.

U.S. Rep. Val Demings, an Orlando Democrat under consideration by Biden, tweeted: “Senator Kamala Harris is a fearless and proven champion for American families and the rule of law. Excited about this team and America’s future.” She said more too.

U.S. Rep. Debbie Wasserman Schultz, a Sunrise Democrat and former National Democratic Committee chair, issued a statement: “I’m thrilled that Sen. Kamala Harris will join Joe Biden on the ticket as his choice for Vice President. Only in America would it be possible for a first-generation American woman like Kamala Harris, who has been a tenacious advocate for working families, a voice for the voiceless, and a fierce fighter for justice, to reach the pinnacle of national leadership. This is a historic choice amidst many well-qualified choices on Biden’s short list, including Florida’s very own Val Demings. On behalf of my constituents, I am very eager for Sen. Harris, someone I proudly call a friend, to show Americans what two competent, smart and qualified presidential candidates look like on one ticket. Amid the historic social unrest, pandemic and economic crisis this nation faces, this is the sharp, honest and steady leadership team that America needs right now.”

Former U.S. Sen. Bill Nelson, a Democrat, tweeted: “Senator Kamala Harris is my friend and is an excellent choice for VP.  Joe Biden, with Kamala as his partner, is now well positioned to win in November and then to govern in order to heal and bring our country together.

U.S. Rep. Al Lawson, a Tallahassee Democrat, tweeted: “VP Joe Biden’s choice of Sen. Kamala Harris speaks to where we are as a nation. We are a diverse country, and that must be reflected in leadership. Sen. Harris is what America needs as we work to Build Back Better & unify our nation.”

U.S. Rep. Daniel Webster, a Republican from The Villages, tweeted his own thoughts: “A Biden-Harris administration will not make our country safer, will not uphold our values or help hardworking Americans be more successful.”

U.S. Rep. Stephanie Murphy, an Orlando Democrat, tweeted: “Kamala Harris spent her career tirelessly pursuing equality and justice, and her historic nomination for vice president will bring a breath of fresh air to this role. I’m looking forward to what she & Joe Biden will do to bring us together and move this country forward.”

U.S. Rep. Darren Soto, an Orlando Democrat, released a video statement: “We saw Vice President Biden really show his strength of character by picking a former rival, a strong women leader in Senator Harris, to be his running mate, and we couldn’t be more excited. She is ready to meet the moment. She’s got the experience of Attorney General for a lot of the justice issues that are really critical to this nation as well as the ability to go into becoming President if she needed to on the first that it would be required.”

.@RepDarrenSoto on @KamalaHarris becoming the VP pick: “We saw Vice President Biden really show his strength of character by picking a former rival. A strong women leader in Senator Harris. She is ready to meet the moment." pic.twitter.com/YWrONt7yFD

U.S. Rep. Kathy Castor, a Tampa Democrat, released a statement: “”I am thrilled that Joe Biden has selected Senator Kamala Harris as the Democratic candidate for Vice President of the United States. Senator Harris will do an excellent job helping Vice President Biden and Democrats build back better from the chaos and pain Trump has inflicted on our great nation. The strength of our country is in its diversity and the values we hold in common. Kamala Harris represents these values and understands the critical tasks ahead to control COVID-19 and tackle the climate crisis. She has been a leader in highlighting the disproportionate impact of COVID-19 on communities of color – and introduced legislation to address these disparities. She has successfully led on environmental justice and gone after dirty corporations for damaging our environment. With this historic selection of the first Black and South Asian American woman on the ticket, the 2020 Democratic National Convention in 6 days will unify America behind Joe Biden and Kamala Harris so that we can begin to build a more just, democratic, kinder and stronger country. I have hope for the future of America!”

U.S. Rep. Charlie Crist, a Tampa Democrat, tweeted: “Senator Kamala Harris is a proven leader and I could not be more excited to have her join Joe Biden as his running mate. She’s been a leader on the issues that matter to so many in Florida. This is a historic ticket. Florida, let’s vote Team Biden/Harris this November!”

I’ve worked with @KamalaHarris on bills to strengthen our public defender system.

I share her commitment to strengthening the US-Israel relationship.

I’m all in for President @JoeBiden & VP Harris. pic.twitter.com/lOqN9an6Kl

U.S. Rep. Alcee Hastings, a Fort Lauderdale Democrat, released a statement: “In selecting Senator Kamala Harris as his running mate, Vice President Biden has demonstrated yet again that he has the judgment, compassion, and wisdom necessary for assuming the office of President of the United States. Today, Vice President Biden and Senator Harris made history, and our country has taken a great step forward in credit to our creed. I am proud to have endorsed Kamala many months ago, a member of my Divine Nine family, and am proud to have earned her endorsement. She is tenacious; she is fearless; she is brilliant; and when she is elected, she will be the first woman and the first Black American to serve as Vice President of the United States. I will do everything I can to support Joe and Kamala winning in November and look forward to working with them to put our country back on track.”

Just last year, @KamalaHarris joined me and @DLCAVA to help bring attention to the plight of children in migrant detention centers.

Folks, together, we shut down the Homestead Child Detention Facility.

I know first hand, @KamalaHarris knows how to fight – and win. https://t.co/3sNJjgamAa pic.twitter.com/V7p6zFyywm

U.S. Rep. Donna Shalala, a Miami Democrat, tweeted: “Senator Kamala Harris is an extraordinary choice to be our next vice president. The Biden-Harris ticket is a winning combination.”

Agriculture Commissioner Nikki Fried, a Democrat, released a statement: “Senator Kamala Harris is ambitious, smart, and someone every little girl and boy can look up to. With her on the ticket our party, and our nation, is stronger. She will help lead Democrats to a victory in Florida, help win back the White House, and will help restore America’s moral compass.”

State Sen. Lauren Book, a Plantation Democrat, tweeted: “Congratulations to Kamala Harris on this historic moment! An incredible leader and fearless fighter who does not back down. Now, let’s keep working turn Florida — and the country — BLUE in November!”

Congratulations to @KamalaHarris on this historic moment! An incredible leader and fearless fighter who does not back down. Now, let’s keep working turn Florida — and the country — BLUE in November! 🇺🇸 🌊 #VPPick #VoteBlue pic.twitter.com/Ss2UkqXJxU

State Rep. Margaret Good, a Sarasota Democrat, tweeted: “With the Biden/Harris ticket we can: have access to quality healthcare; protect our environment; ensure equality for all; sleep again. Biden/Harris2020”

With the Biden/Harris ticket we can:
✅ have access to quality healthcare
✅ protect our environment
✅ ensure equality for all
✅ sleep again #Biden/Harris2020🇺🇸 pic.twitter.com/jxEr8sXnXv

Miami-Dade County Commissioner Daniella Levine Cava, a Mayoral candidate, issued a statement: “This is an historic moment for our country. Another glass ceiling has been shattered with Sen. Kamala Harris’ nomination as Vice President, and I am proud to join her and the women running for office across the country as we continue to break through even the toughest barriers. We are united for change in 2020.”