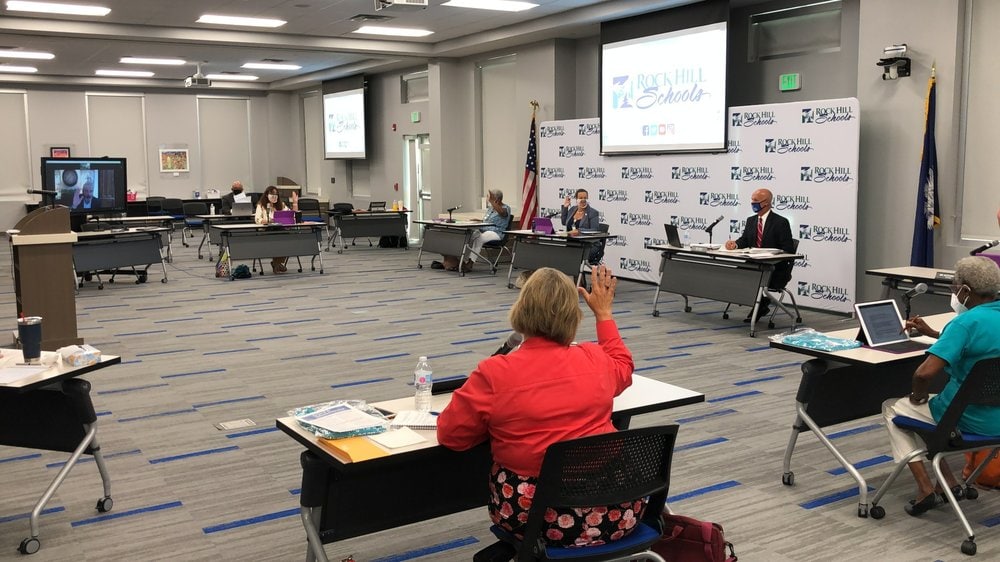 Nationwide, districts wrestle with difficult choices that still must be made.

Helena Miller listened to teachers, terrified to reenter classrooms, and parents, exhausted from trying to make virtual learning work at home. She heard from school officials who spent hundreds of hours on thousands of details — buses, classrooms, football, arts, special education. She spent countless nights, eyes wide open, her mind wrestling over the safety and education of the 17,000 children she swore to protect.

She thought of her own kids, two in high school and one middle-schooler — the reasons she ran for Rock Hill’s school board six years ago.

And she made the hardest decision of her life: a vote to reopen schools amid the coronavirus pandemic, splitting students into two groups that would each spend two days a week in classrooms, with virtual learning the other school days.

“We have an impossible decision to make. And we still have to make it,” Miller said from a tiny box on Zoom at the board’s July meeting.

This Board of Trustees in suburban South Carolina is like thousands of school boards nationwide, where members are tackling a simple but hefty question — do we return to school amid a pandemic? — with no right or even good answers, in the face of inconsistent testing and a near-constant increase in confirmed coronavirus cases.

Behind that question is pressure. Pressure from teachers and bus drivers and janitors, scared to return to work but in need of a paycheck. Pressure from parents and guardians, who need to return to their own jobs but fear for their children’s safety. Pressure from a president who declares on Twitter “OPEN THE SCHOOLS!!!” but whose administration provides little tangible guidance for doing so.

In Rock Hill, everyone has an opinion. The district has more than 17,000 students, and that means about 17,000 proposals on how to go back to school, trustees say, only half-joking.

And in South Carolina, with some of the country’s worst virus numbers, even state leaders can’t agree. Gov. Henry McMaster contradicted his education superintendent and said schools must allow a five-days-a-week option for working parents. School boards were left to untangle the mess – Rock Hill called an emergency meeting and ultimately kept its staggered plan.

There’s been plenty more to resolve: Should classes be delayed until after Labor Day? How do kids get to school with buses at half-capacity for social distancing? What about masks and protective equipment? Should students have drama or orchestra if there are no public performances? What will student athletes do in a place like Rock Hill, known for sending football stars Jadeveon Clowney and Stephon Gilmore to the NFL?

School boards represent democracy at its local core: the backbone of communities, a check on superintendents, and the most direct way to influence education policy. And Rock Hill’s strategy was very democratic. The board officially listened to eight committees, some made up of dozens of parents and business or community leaders. Each member spent dozens of hours in emails and informal discussions with people in and around their city of about 75,000 people.

There were teachers to consider. Susan Fields told the board last month, in its first in-person meeting since the pandemic, that she has lupus and must protect herself: “I love my kids, and for 25 years I have always put my students first. This is very odd for me … for once I am standing up as an educator.”

Special education teacher Shannon Gonzalez reminded the board that it promised extra face shields and gloves for those like her who work with students with significant developmental delays.

“It is impossible to teach a class like mine without constant physical contact,” Gonzalez said. “They need hand-over-hand assistance for most everything they do. And for the last eight years, it has been my hand over their hand. It has been my face level with theirs calming them as they come out of a seizure.”

And there were parents. At a July meeting, Emily Bell thanked the board for their careful, thoughtful work and told them she wasn’t sure what she would do with her daughter in elementary school.

Nearly every issued hinged on policy in the school manual, which staffers and board members pored through for hours. Changes had to be passed: Widened circumstances allowing for virtual classes, the end of open-door hours for parents eating lunch with kids, permitting athletes to practice or play if they weren’t physically in school that day.

The board didn’t agree on everything, from big matters to small. Trustee Brent Faulkenberry initially didn’t favor the plan for in-person class only two days a week. He wanted five, to help working parents, with online school available for anyone worried about safety.

“If families can’t work, they can’t provide for these kids,” he said.

Board member Robin Owens told him he made good points, especially about her fear of young children left at home while parents work. The two-day-a-week plan, she said, “falls squarely in the middle, which means that it is probably not going to make anyone happy. Hopefully it will make some people satisfied.”

Faulkenberry’s five-day proposal lost 5-2. The board then unanimously agreed to the staggered schedule and delaying the first day of school to Sept. 8, the latest allowed by state law.

There was no shouting, no claims of fake science, no accusations that trustees didn’t care for kids. At a time when such arguments erupt everywhere from talks shows to Facebook, from the White House to the corner store, this board prides itself on civil discourse.

“I am so thankful to serve on a board where professionalism is put on the forefront,” said Miller, who moved to the United States from Sweden in 1997, became a U.S. citizen in 2006, and has set out since becoming board chairman in 2018 to create a deliberative body that disagrees amiably.

Trustees’ ties are forged through regular meetings, trips for training, and school visits together. Even as they met through Zoom, Miller kept some in-person routine. Trustees stood and recited the Pledge of Allegiance as video of a waving flag played played. Miller plunked her gavel on a tiny wood box after votes and to end meetings.

This month, Miller is gently directing the group back to in-person meetings. If trustees are sending children into schools, she said, the board should physically meet, too. Meetings look much like school, with seats spaced 6 feet apart and everyone in masks.

Mask policy was on trustees’ agenda Monday night. Before the pandemic, masks — as face coverings similar to bandanas — could be considered gang attire. Now, students must wear one to enter the building. District officials suggested allowing a classroom “mask break” once teachers and students are settled and socially distanced. Trustees weren’t sure.

“We have very small classrooms in very old schools,” Faulkenberry, who’d opted to participate virtually, said from a video screen placed in his seat. “That air is still recirculating.”

And what about doors? District policy requires that teachers lock doors during class. But health officials recommend open doors for air circulation.

The board approved a preliminary mask policy but agreed to fine-tune it. The issue of doors was left to a future meeting, with only a few weeks until the first day of school.

The trustees agree that their work during the pandemic — for which they’re paid their usual salary of $600 monthly, unlike the 62% of school board members nationwide who get no compensation, according to 2018 National School Boards Association figures — has been the hardest of their tenure.

“We want what’s best for our children,” said trustee Windy Cole, who’s had her own tears and sleepless nights. “I’ve been in all the meetings, I’ve listened to everything I can, and I trust our district is doing the best possible under these horrible circumstances. We have to just keep praying,”

And they’ve been able to find moments of joy. During a long virtual meeting largely focused on the district’s $175 million budget, a school employee announced a summer program where every student from pre-K to grade eight would get a box of books delivered to their home.

The trustees cheered. “This makes my heart so happy,” Cole said.

After all the talk of taxes, missed celebrations for employees, and the logistics of school amid the virus outbreak, Miller reminded her colleagues: It’s not just “doom and gloom.”

And she offered them all a virtual hug.