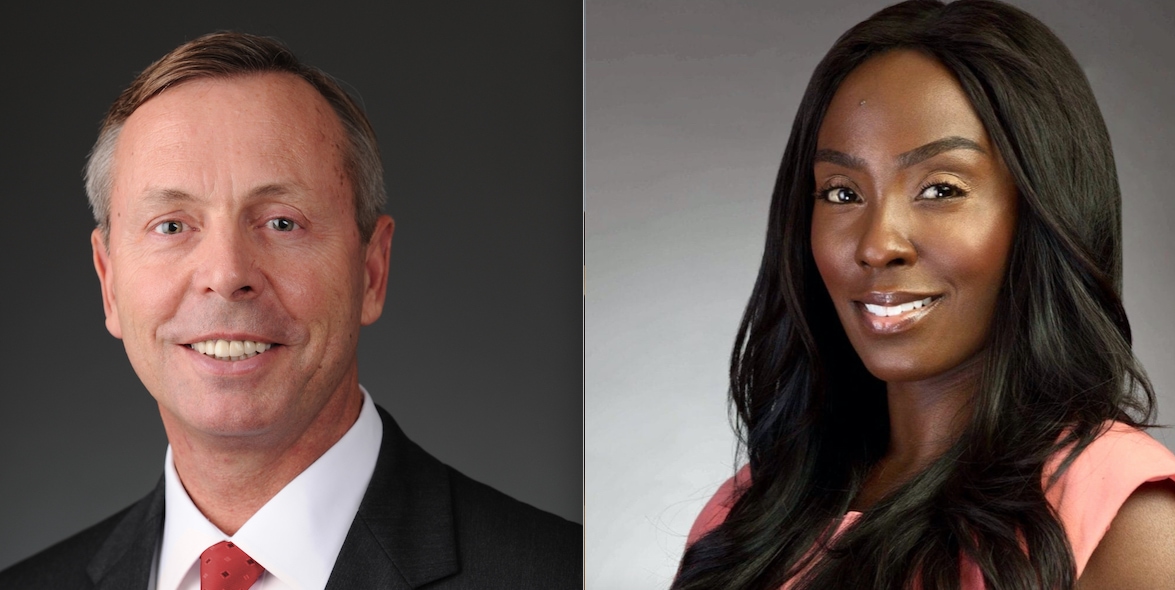 Smith contends he has been effective for Seminole County.

Florida House District 28’s very different election candidates, Republican Rep. David Smith and Democrat Pasha Baker, each say the proof of their commitments to the community is in decades of public service outside elected office.

Their very different public service commitments, each say, have transformed their campaigns in very similar ways heading toward the Nov. 3 General Election.

Smith spent 30 years in the Marines, rising to the rank of colonel and serving combat duty along the way. In 2018 he won the HD 28 seat.

His commitment, Smith said, not only helped make him one of the most effective freshmen of his or any class, sponsoring six policy bills and 10 local appropriations that were approved and signed into law, it has kept him busy through the coronavirus crisis to help people get unemployment benefits and to help businesses get resources they needed.

“It’s a powerful feeling when people are calling you. Mostly women, but a lot of men too, they’re crying because they can’t feed their families,” Smith continued. “With a service industry in Central Florida we have a lot of folks that, if they don’t work, they don’t eat. I’ve directed a lot of people to food banks to help, and then rolled up my sleeves to help them get their benefits.”

Baker spent decades serving the Sanford community where her family lived for generations, running several non-profit organizations and serving as the catalyst to bring in grants and personal assistance where needed. That continued with more urgency through the coronavirus crisis. Background in business, working at JP Morgan Chase and Verizon before coming home to Sanford, helps too.

“We are not a typical campaign. Our actions are now. You can help without a title,” Baker said. “We’re helping the small businesses with PPP loans, and with the Seminole CARES [Act] grants, and other grants. We help them write grants, making sure they know how… That is my area of expertise. So this is up my alley,” Baker said. “I’ve been doing this for many years.”

The district covers most of eastern Seminole County and parts of central Seminole, including the cities of Sanford, Winter Springs and Oviedo. Republicans have held the seat for many years but Democrats believe they have a shot, especially with a charismatic Black businesswoman with deep roots in the community who came close to winning the Sanford mayoral race in 2018 over a two-term incumbent.

Smith won the HD 28 election in 2018 in a close 51%-49% contest over Democrat Lee Mangold. Baker defeated Mangold in the Aug. 18 Democratic primary.

Republicans hold a little better than 2-point advantage in voter registration, with about 37% of the voters registered as Republicans, 34% as Democrats, and 29% as independents. The district has Seminole County’s largest African American population, largely centered in Sanford, but also significant in the Geneva and Oviedo region.

There also is an independent candidate, Michael Riccio.

Heading into the fall, Smith has the wherewithal to mount a formidable campaign, while Baker will have to find some money.

Baker spent most of the $38,000 she raised to pull off an airtight win in the Democratic primary. She entered the fall campaign with about $4,700 left for a restart, according to the latest reports available from the Florida Division of Elections, through Aug. 21.

Smith had $235,439 in the bank on Aug. 21. And that’s despite the fact that Smith’s campaign was hard at work during the primary despite not facing opposition. The campaign spent more than $17,000 on advertising in recent weeks. Overall, he’s managed to raise more than $338,000.

He points to his support for the education package Gov. Ron DeSantis proposed and the Legislature approved to provide $500 million to raise minimum salaries for starting teachers. He also pushed through a Public Education Capital Outlay appropriation for Seminole State College, a rarity as PECO money became hard to acquire in the past session.

Smith also has been a strong proponent of vocational education, as someone who started his career with one in welding. He notes he also got an appropriation for vocational programs in Seminole County Public Schools.

In economic development, Smith particularly points to his involvement in promoting expansion of the space industry in Florida, centered on the Space Coast, but spilling into Seminole County, both for workforce and future business opportunities.

He envisions Seminole County, a commute-distance away from Kennedy Space Center, as an optimum location for new space industry, particularly at the Orlando-Sanford International Airport, which has 700 buildable acres available for the industry and long runways.

It’s the environment platform that might set Smith apart from many Republicans, though Florida, and especially Seminole County, is home to bipartisan support for environmental protection. Smith touts a half-dozen bills he passed to provide funding for cleanup projects in Seminole County, notably of Lake Jesup and Lake Monroe, and his bill to stiffen penalties for bear poaching.

“I really think I can rightfully call myself an environmental leader,” he said.

Smith contends his record demonstrates so much success that he’s added a fourth “E” to his campaign mantra, effectiveness.

“You can go to Tallahassee, roll up your sleeves and make a difference. That’s what I do,” he said.

Baker said that’s what she would do, too.

But she is less impressed with what has happened in Tallahassee under Republican leadership and Smith’s actions.

In particular, she faults him for voting yes on HB 410, which critics say could have negated efforts to stop a controversial River Cross development, in an area beyond the rural boundaries set by Seminole County voters. Smith disputed that the bill would have done so, but his vote rankled those opposing the developments’ potential impact on the environmentally sensitive Econlockhatchee River watershed. It is a clearly divisive issue in Seminole.

“I am fully supportive of the rural boundary,” Baker said.

She also said Seminole has been suffering flooding problems with the various waterways associated with the St. Johns River and Lakes Monroe and Jesup that need more attention than the state has provided.

On public education, and on other issues that involve state funding, Baker is a passionate critic of the Legislature’s long-running denials of dedicated funding from the lottery, and various trust funds, which are routinely raided in every state budget bill.

“If the Sadowski Fund is for affordable housing, then let it be used for that. It can’t be somebody’s piggy bank for other people’s uses,” she added.

This is not an election where either candidate is eager for the confrontational politics of President Donald Trump and the presidential election to enter the discourse. However, they concede Trump’s influence through DeSantis’ relationship with the President.

Smith is counting on bringing needed resources to Florida to recover from the coronavirus crisis.

Baker says that relationship makes DeSantis a conduit for bad policy for Floridians.

previousLast Call for 9.1.20 — A prime-time read of what’s going down in Florida politics

nextBusinesses could get break on worker's comp