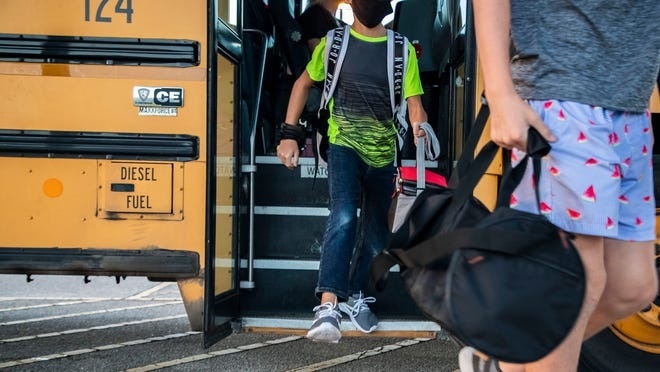 The district is not reporting how many, if any, classes have been quarantined.

The school district released a COVID-19 dashboard on Monday to let the public monitor the spread of coronavirus within the school system. The district has reported 170 cases since July 31.

The dashboard also includes a list of the impacted schools with number of students and employees that have tested positive for COVID-19.

Students and employees listed in the dashboard since reopening have each been on campus, except for four of the six students listed in Monday’s report who were not on campus, since it was the first day of school, said district spokesperson Tanya Arja.

The dashboard is updated automatically every hour from 7 a.m. to 7 p.m. seven days a week.

Individuals who were in contact with a confirmed case on campus must be quarantined, required to stay home for 14 days. However, the district is not yet releasing quarantine information publicly, Arja said, but families of students who must be quarantined have been contacted.

Hillsborough County School Board member Karen Perez has voiced her concerns about schools having to shut down quickly because of quarantine requirements. Perez has been vocal about the district’s need for transparency in positive cases within the county school system. With these numbers, she worries schools will quickly have to shut down.

While the district just opened classrooms on Monday, the school year started online in the county last week, on Aug. 24. What the district called a “Smart Start Week,” this online start was designed to get students comfortable with e-Learning, especially if the student will have to move to online classes if forced to quarantine.

In neighboring Pinellas County, schools opened their doors a week earlier. Pinellas reported seven students and 11 school employees who tested positive. The county also reported that 26 classrooms were quarantined. Eight district facility employees have also tested positive at the Walter Pownall Service Center, which doesn’t include a student population. Unlike Hillsborough, Pinellas does report the number of classroom quarantines.

After Davis met with Corcoran, the state and district compromised: Hillsborough would start the school year as planned on Aug. 24 online, but transition back to brick-and-mortar classes Monday.

Schools that have been impacted since starting brick-and-mortar classes on Monday are listed below: