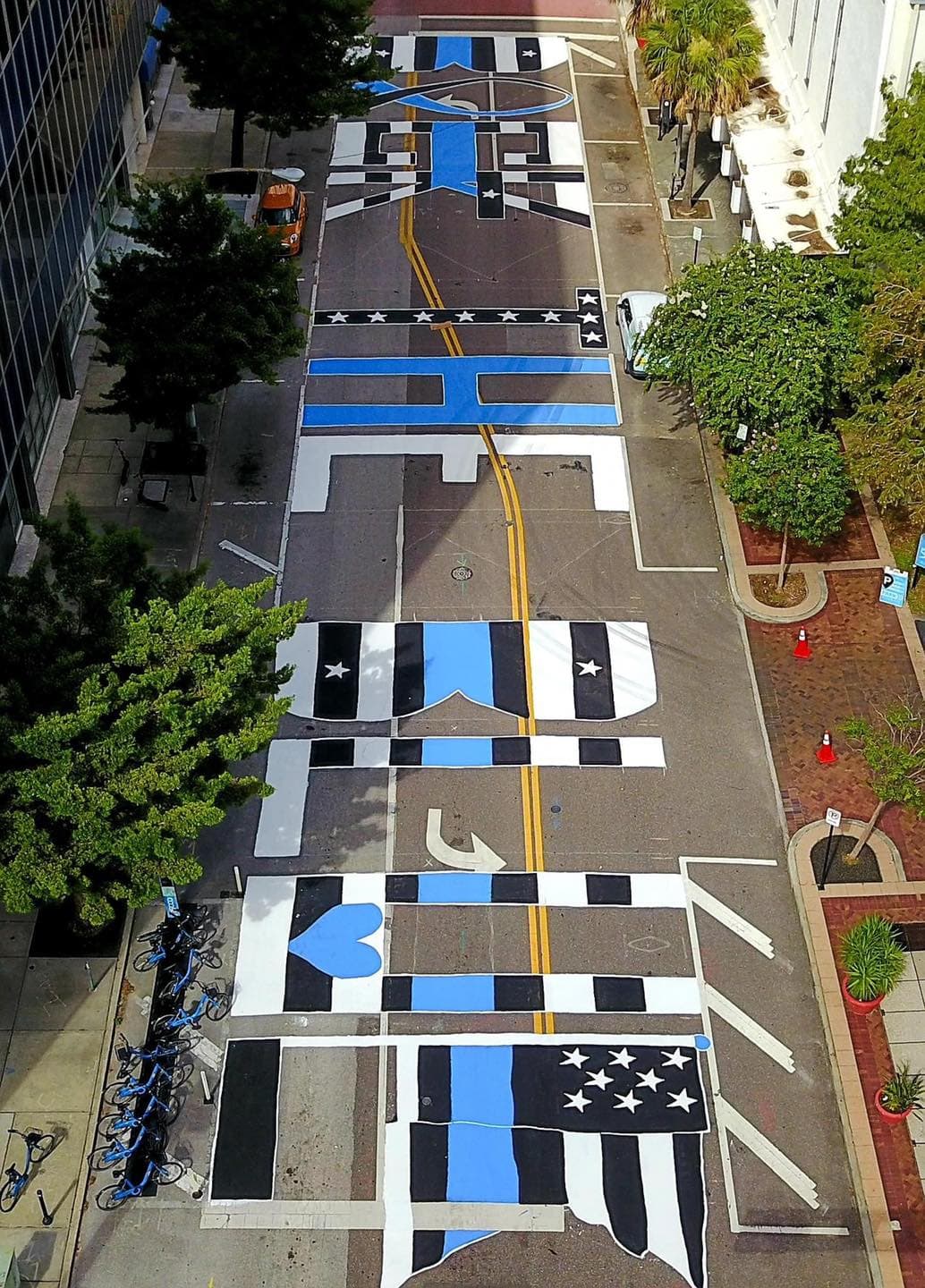 The office also will not pursue charges against those who painted over the mural.

The “Back the Blue” street mural was painted in front of Police Headquarters on Madison Street and Franklin Street by pro-police volunteers. However, it became the topic of controversy following news that the volunteers did not get approval from the city, which is needed to paint on a public street.

According to the city, the groups behind the project, Back the Blue Florida and Tampa Community of Patriots, applied for a permit, but one was not approved before they painted the street.

Doing so violated a number of city codes, including blocking a city street without a permit.

“It is unlawful for any person to place in or upon any place, street, sidewalk, alley, landing, wharf or pier owned or controlled by the city and located within the city limits any article or thing without a permit therefor, unless such article or thing is otherwise authorized by law,” city code section 22-8 states.

The mural was soon defaced, smothered with red and black paint, and later spray-painted with the words “BLM” and “PIGS,” according to WTSP. The Tampa Police Department made three arrests.

Police officers originally detained eight individuals. After reviewing video footage, officers determined four of them committed “criminal mischief on the roadway by defacing the road.” One suspect was released on the scene because they were a minor. None of those arrested face charges.

In an update regarding social justice protest arrests, the State Attorney’s office has filed 264 charges against 120 individuals for crimes ranging from looting and burglary to attacking police.

The State Attorney’s Office is charging Adam Sartori with criminal mischief for vandalizing a police car on May 30. It will also charge Noah Armstrong with reckless driving for steering his car through a group of protesters on July 4.

The office will not pursue charges on Jae Passmore for an incident on Aug. 12, after lightly pushing a man who walked closely by her. According to the office, as consistent with other similar cases, they are “exercising discretion not to expend limited resources prosecuting an extremely minor incident that presents no threat to public safety.”

In addition, the office is dismissing false imprisonment charges against Sadie Dean and Torrie Grogan that resulted from a confrontation on June 27 in Hyde Park Village, with evidence unable to establish beyond a reasonable doubt the elements necessary for false imprisonment.

Finally, the seven individuals who blocked a walkway and began to paint on public property in Curtis Hixon Park without permission will not face charges.

The majority of charges filed stem from widespread unrest in Tampa on the night of May 30, according to a news release from the office. Two-thirds of the charges are felonies, each carrying a potential penalty of at least five years in prison if convicted.

The unrest came after a police officer in Minneapolis killed George Floyd, a move that sparked nationwide protests.

In a statement, the office wrote, “These types of cases involve tough decisions. Our guiding principle is to distinguish between people committing crimes for personal gain or to cause destruction versus protesters whose aim is to make their voices heard … We will prosecute those who seek to harm our community, but it is counterproductive to criminally prosecute people who are exercising their First Amendment rights — especially when other options exist to address questionable behavior, such as civil citations.”