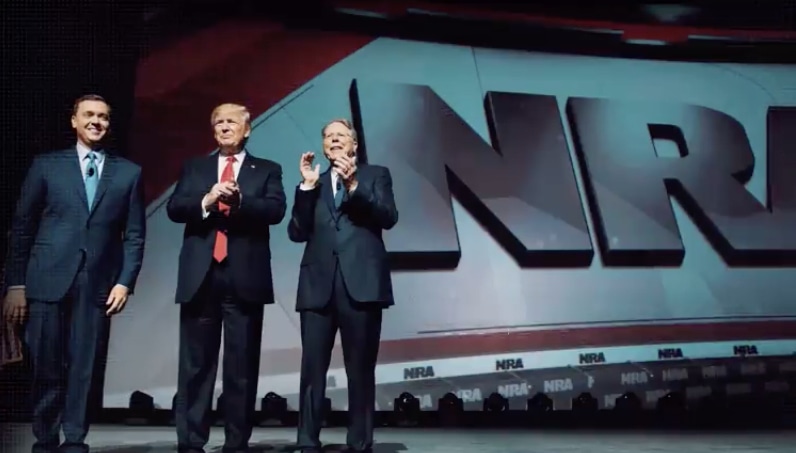 Everytown for Gun Safety Victory Fund, an organization backed by former Democratic presidential candidate Michael Bloomberg, announced it is launching three new commercials on television in Tampa and Orlando and statewide in Florida as digital ads.

The commercials go after Trump on guns, yes, but also on health care and coronavirus response.

The ads are being produced in partnership with Priorities USA, the Democratic political action committee. The campaign is spending $4 million on TV ads to run in Orlando and Tampa, and $2 million on digital ads to run statewide in Florida.

“President Trump’s inaction on COVID-19 has only made gun violence worse,” explained Charlie Kelly, senior political advisor at Everytown for Gun Safety. “Our polling found that messages focusing on the impacts of COVID-19 on America’s gun violence crisis and his capitulation to the gun lobby were highly effective overall at shifting support to Biden. With these ads, we’re reminding voters that these issues are interconnected and that COVID-19 isn’t the first public health crisis the president has ignored; he’s been doing it with gun violence since he came into office.”

“President Trump’s utter failure to address gun violence and COVID-19, two of the most urgent public health emergencies facing our nation, has been especially deadly in Florida,” John Feinblatt, president of Everytown for Gun Safety, said in a written statement.

One 30-second spot, “Check,” is about mostly guns. The ad accuses Trump of backing down from promises to support more-universal background checks, pledges he made after the 2018 mass murder at Marjory Stoneman Douglas High School in Parkland. The ad connects the dots between the President’s actions and $31 million his campaign received from the National Rifle Association.

“After the Parkland shooting Trump told supporters he supported background checks,” a narrator says, showing Trump with Stoneman Douglas students after that massacre, which took the lives of 17 students and teachers and wounded 17 others on Feb. 14, 2018. “Then, he abandoned that promise. And after El Paso [site of an Aug. 3, 2019, mass murder of 23 people] Trump again assured the NRA that background checks were off the table.”

The commercial climaxes with video of Trump at an NRA event declaring, “I will not let you down.”

In “Mask” there is a mixed message of a crashed economy and criticism of the President’s record on health care access. The ad switches between images of Trump and of people wearing masks with writing on them staring at various things like “Unemployed,” “Uninsured,” “Diabetes,” and “Cancer.”

“Fifty-seven million Americans have lost their jobs. Many have lost their health insurance, too. Donald Trump remains laser focused on gutting health care, proposing billions in cuts to Medicare, and trying to destroy the Affordable Care Act in the middle of a pandemic,” a narrator states. “If Trump gets his way, insurance companies can discriminate against people with preexisting conditions, and 23 million Americans will lose their coverage.”

In “Warning” there is a nod to gun violence, but it’s not the main point of the commercial. The narrator notes that in his inauguration address, Trump warned about “American carnage.” The narrator concludes,  “He was right.” The ad points to more than 125,000 deaths from gun violence and more than 185,000 deaths due to COVID-19 during his four years as President. The ad accuses Trump of “downplaying, denying, refusing to act.”

“Now Trump warns about the carnage to come if he’s not reelected, as the death toll continues to rise,” the narrator declares.

All three commercials end with the same catchphrase: “Donald Trump is failing America.”

“Priorities USA is doing everything we can to reach the voters that will decide this election. We are proud to partner with Everytown to make the case for Joe Biden to Floridians by connecting his record of strong leadership with the issues that voters care most about,”  Priorities USA Chairman Guy Cecil said in a written statement. “While Donald Trump has been endangering the well-being of the American people since day one of his presidency, organizations like Everytown have spent years fighting for our safety. Florida voters want a President who will stand with them, not with lobbyists and corporations.”