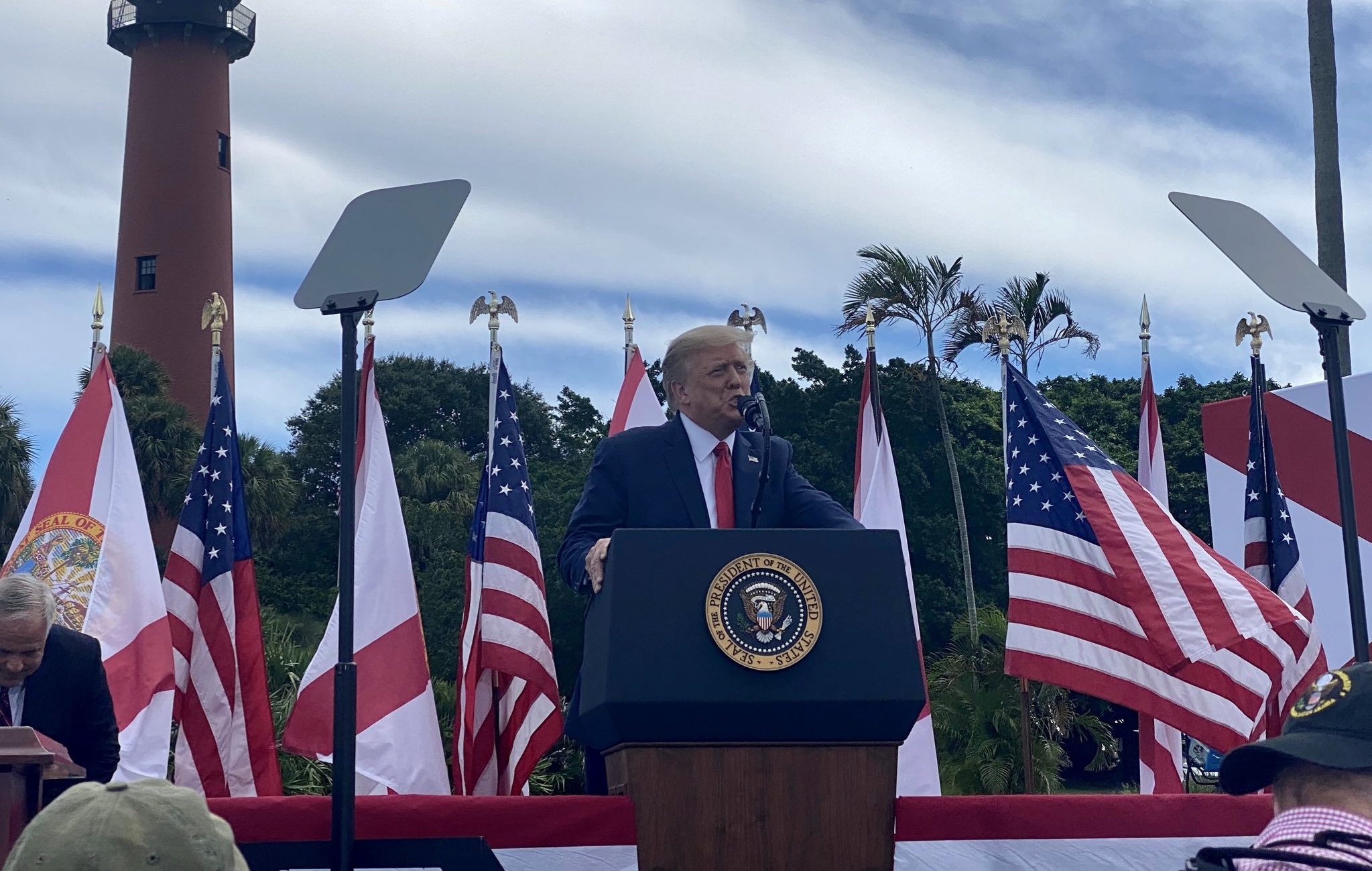 The President compared his accomplishments to Teddy Roosevelt.

President Donald Trump has extended a moratorium on offshore oil drilling off Florida’s Gulf Coast and expanded the moratorium up the Atlantic Coast through an executive order Tuesday.

The ban on drilling off Florida’s Gulf coast was set to expire in June 2022. But with Trump’s signature during an event in Jupiter, he extended the moratorium 10 years and added the Atlantic coast to the ban from the Florida Keys to South Carolina.

A memo from the Secretary of the Interior noted the region had been withdrawn from consideration from July 2022 to June 2032.

The executive order was the main event at a campaign stop where the President touted his environmental bona fides and called himself the top President on the environment since Teddy Roosevelt, who established the United States Forest Service in 1905.

“Trump is the great environmentalist,” the President said, referring to himself in the third person.

Democrats, he added, “talk a big game, and they do nothing.”

“To our political opponents, environmental policy is just an excuse to impose a socialist platform that will impose trillions and trillions of dollars in taxes and send our jobs overseas, making it impossible to open up new companies and to live less expensively,” Trump said.

Gov. Ron DeSantis — who was on the tarmac to greet the President and on stage to lob the President’s Sharpies into the front row after Trump signed the order — has also tried to wrest the environmentalist label from Democrats. In June, he signed two pieces of legislation promoting clean water in the Sunshine State and has made environmental policy a priority.

Work on the executive order came after consultation with DeSantis; the Governor’s predecessor, Sen. Rick Scott; Sen. Marco Rubio and officials from Georgia and South Carolina. North Carolina too, Trump noted, would receive the benefits from the drilling ban.

“As Gov, I fought for & secured a commitment from this Administration to keep drilling off FL’s coasts,” Scott tweeted. “After many conversations with @realDonaldTrump on the importance of keeping FL’s coastlines pristine, I’m glad he’s extending the moratorium for another 10 yrs. Big win for FL!

Rep. Matt Gaetz, of Fort Walton Beach, tweeted a video of his own comments on offshore drilling over the years and capped it off with a clip of Trump’s speech.

One of his congressional colleagues who also attended and received a shoutout from the President, Rep. Brian Mast, gave his comments in a statement after the event.

“Drilling off the shores of Florida is a non-starter—not worth the risk of endangering our environment, fishing, boating or tourism,” he said. “President Trump’s plan to extend the moratorium is the right one, and it proves that our voices are being heard.  We must never tolerate drilling near our beautiful coastline!”

“Thank you @realDonaldTrump for protecting Florida’s natural treasurers from drilling,” he said. “Our oceans are a major driver for economic activity & are worth protecting at all costs. Today is a historic day & we’re grateful for your support of the Sunshine State!”

Trump also highlighted recent and past environmental actions in Florida, including expanding funding for restoring the Everglades, the Great American Outdoors Act and improving air quality.

The Trump administration’s initial decision earlier in his term to open up the eastern Gulf of Mexico, the Atlantic coast and Florida Straits to drilling received almost universally negative reaction from Florida lawmakers, including Scott. That led then-Interior Secretary Ryan Zinke to exclude Florida from any proposed offshore drilling plans because “its coasts are heavily reliant on tourism as an economic driver.”

Florida is a battleground state and possible tipping point in the November presidential election. After Trump hit Democrats and the Obama administration, former Vice President and Democratic presidential nominee Joe Biden swung back at the President over social media.

“Just months ago, Donald Trump was planning to allow oil and gas drilling off the coast of Florida,” Biden tweeted. “Now, with 56 days until the election, he conveniently says that he changed his mind. Unbelievable. You don’t have to guess where I stand: I oppose new offshore drilling.”

An NBC News/Marist Poll survey released earlier Tuesday show Trump and Biden neck and neck in the Sunshine State. Among likely voters, both candidates grabbed support from 48% of likely voters, according to the poll.

nextLast Call for 9.8.20 — A prime-time read of what’s going down in Florida politics