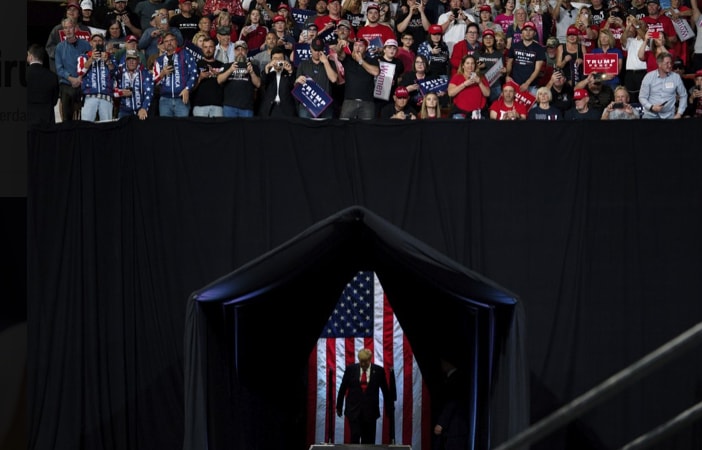 “The only thing we have to fear is fear itself.” — President Franklin D. Roosevelt.

“One day, it’s like a miracle, it will disappear.” — President Donald Trump.

In times of crisis — wars, hurricanes, pandemics — effective leaders strike a balance between inspirational rhetoric and leveling with the public about the tough times ahead.

Historians say Trump missed the important lessons about how other world leaders have navigated crises.

Facing the coronavirus, Trump chose a different path, acknowledging that from early on he was intentionally “playing down” the threat from an outbreak that has gone on to kill more than 190,000 Americans. His rosy assessment of the peril confronting the nation spotlights the struggles he has faced in trying to steer the United States through the challenge of a pandemic.

Trump on Thursday placed himself in the august company of Roosevelt and Churchill for the way he has handled this crisis, adding that he had low-balled the threat to prevent “panic.”

He spoke with admiration of Roosevelt’s famous admonition against fear and Churchill’s ability to project calm during the bombing of London. Trump said of his own performance: “We did it the right way and we’ve done a job like nobody.”

“They wanted me to come out and scream, ‘People are dying, we’re dying,’” the president said at a campaign rally in Michigan. “No, no, we did it just the right way. We have to be calm, we don’t want to be crazed, lunatics. We have to lead.”

Trump, though, is no stranger to stoking fear when it works to his political advantage: His inaugural address spoke of “American carnage” and he has warned in apocalyptic terms of a Joe Biden victory this November.

Roosevelt’s inaugural address, at the depth of the Great Depression, included not just the famous appeal against fear, but a sobering assessment of the challenges ahead.

“Only a foolish optimist can deny the dark realities of the moment,” Roosevelt said, following up with a confident pledge for 100 days of swift action. After Pearl Harbor, Roosevelt insisted the U.S. would be victorious, but also prepared the nation for a “long war” and a “hard war” ahead.

“Sometimes it is the president’s job to scare people with the truth,” said presidential historian Michael Beschloss, author of the bestseller “Presidents of War.” “That’s what Roosevelt was doing after Pearl Harbor. Look at Kennedy in the Cuban missile crisis. He was saying there could shortly be a nuclear war. He was telling the truth. Great presidents at times of calamity and crisis tell the truth even if the truth might make people anxious.

“In Trump’s case, he was saying it was not a dire situation, he was putting people off their guard,” Beschloss added.

Churchill may have spoken with calmness but he was candid about the struggle ahead. “The whole fury and might of the enemy must very soon be turned on us,” he warned in 1940 before the Battle of Britain.

Hunter College professor Andrew Polsky said Trump’s comparison of his own rhetoric with Churchill’s was “amusing.”

“There are some threats that you can’t downplay, that you can’t pretend don’t exist,” he said. “Downplaying the threat suggests you’re out of touch.”

The fact that Trump was confronted by the pandemic on the heels of impeachment and with the country bitterly divided only added to the imperative that he be transparent about the challenges ahead. Instead, Trump’s priority was to project confidence at a time when aides said he hoped to protect a booming economy that he believed was vital to his reelection.

That was after word broke on Wednesday that in a taped Feb. 7 call with journalist Bob Woodward, Trump had clearly laid out the dire threat from the virus, saying, “You just breathe the air and that’s how it’s passed. And so that’s a very tricky one. That’s a very delicate one. It’s also more deadly than even your strenuous flus.”

“This is deadly stuff,” the president repeated for emphasis.

Just three days later, Trump struck a far rosier tone in public, saying in an interview with Fox Business: “I think the virus is going to be — it’s going to be fine.”

Delivering bad news is never easy, but communicating such news to the public is part of a president’s responsibility, especially where public health is concerned, said Hofstra University political science professor Meena Bose.

Bose said that while she appreciates Trump’s explanation that he publicly played down the severity of the virus because he didn’t want to incite public panic, it was unclear how receptive the public would have been to the news had he been more upfront about the situation.

She cited public skepticism even after schools, sports, entertainment and other industries shut down to keep the virus at bay.

Still, “you want people to be informed and to make decisions that are for individual safety and for public safety. There are real consequences to not taking action,” said Bose, director of Hofstra’s Peter S. Kalikow Center for the Study of the American Presidency.

“This was clearly in retrospect an area where more communication is needed,” she said. “The difficulty of delivering bad news should never overtake the responsibility of giving it.”