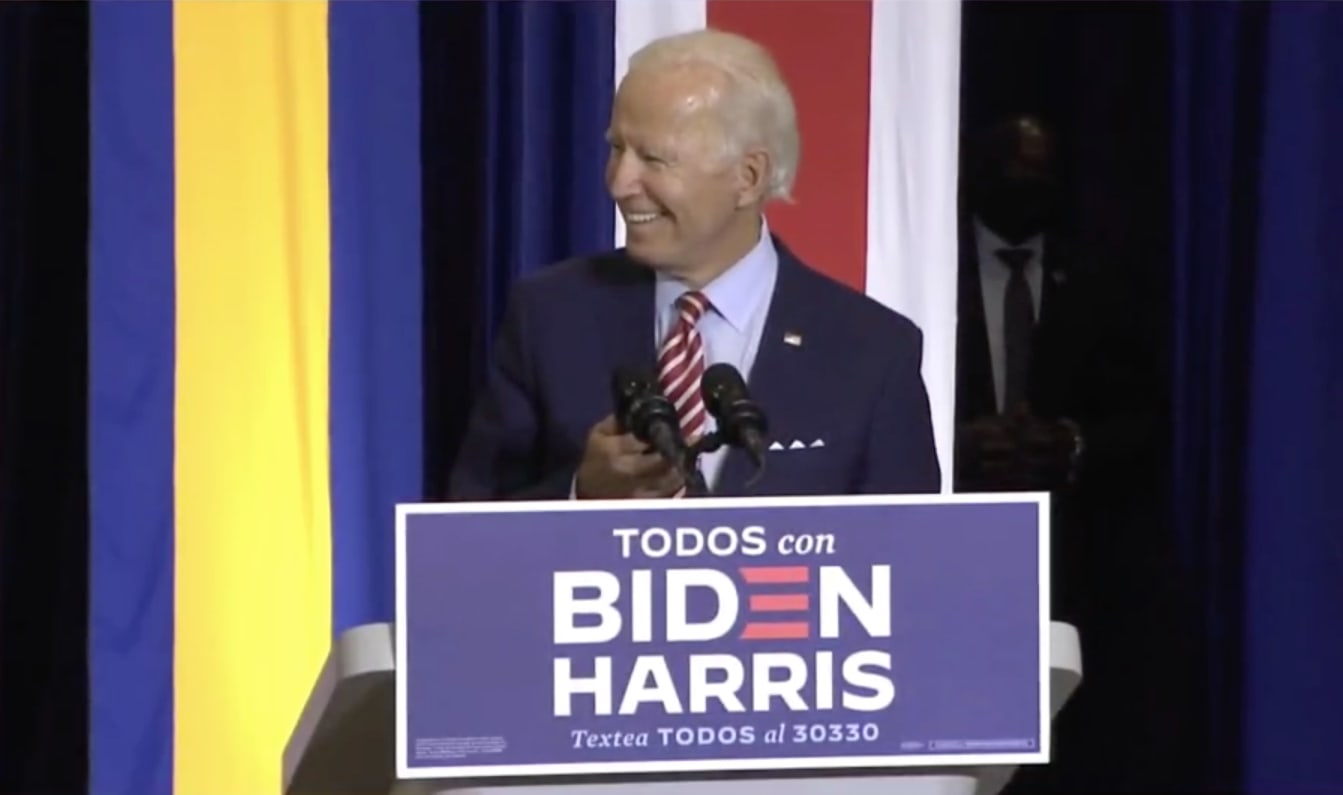 Biden wove between appeals to Puerto Ricans, Hispanics, and all voters.

Democratic presidential nominee Joe Biden made his pitch for the Puerto Rican community and Hispanic voters in general Tuesday as he told a small Kissimmee gathering that his inspirations for strength are the same as theirs: faith and family.

“They’ve been the cornerstone of my entire life. That’s what I come back to again and again. … It’s been the source of my strength in times of struggle and my comfort in times of grief,” Biden said. “Faith and family. It seems to me, that’s the same strength that has always animated the Hispanic community.”

Biden’s 16-minute address at a Hispanic Heritage Month event at the Osceola Heritage Park offered specific pledges and acknowledgements to Puerto Ricans, including his promise to support statehood if the islanders vote for it; broader appeals to Hispanics of all ethnic backgrounds; and many of his standard appeals on broader issues from racial injustice to climate change.

Biden made his pitch.

While Central Florida and Kissimmee have significant numbers of Cuban Americans, as well as other Hispanic ethnic groups that have tended to support Republicans, notably Venezuelans and Nicaraguans, Kissimmee and Central Florida in general is largely Puerto Rican country.

The city is the heart of Florida’s large Puerto Rico diaspora that stretches from Davenport through much of northeastern Osceola County, southern and eastern Orange County, and south-central Seminole County. Hundreds of thousands of people from Puerto Rico settled there, especially after the economic crisis, Hurricanes Maria and Irma, and earthquakes in the past few years.

Puerto Ricans tend to register and vote as Democrats. Voter turnouts in the community, however, have typically been quite low.

Biden offered sharp criticisms of Trump. Biden accused the President of abandoning Puerto Rico after Hurricane Maria punished the island in 2017. Biden ridiculed him for reports that he offered to sell Puerto Rico or trade it to Denmark for Greenland. He charged that Trump “doesn’t seem to grasp that the people of Puerto Rico are American citizens already.”

Yet Biden moved back and forth between comments addressing Puerto Ricans specifically, such as paying homage to the Puerto Rican 65th Infantry Regiment of the U.S. Army, nicknamed “The Borinqueneers,” to appealing to Hispanics generally, criticizing Trump’s “heinous act” of family separation of detained border crossers, to addressing the broadest of American issues, such as contending Trump’s refusal to acknowledge the science behind climate change is neglecting dealing with what is igniting more, and more-powerful, hurricanes hitting Florida, Puerto Rico, and elsewhere.

“We’re so much better than we are acting now,” Biden said. “The rest of the world is looking at us saying what has happened to you?”

Biden used the visit to highlight his new plan for Puerto Rico recovery and investment, which was released earlier in the day while he was heading to Tampa to meet with veterans at another campaign event.

Cornerstone of that plan is creation of a federal working group for Puerto Rico which would report directly to the President.

Biden pledged support for a full recovery and infrastructure reconstruction in Puerto Rico to modern standards; investment in Puerto Rico’s future through economic development initiatives and support for families, including removal of restrictions unique to Puerto Rico that limit its access to Community Development Block Grants; relief from unsustainable debt, including forgiving federal disaster relief loans; and expansion of access to affordable health care, education and workforce development.

Republicans countered Tuesday with their own Hispanic Heritage Month rally in Kissimmee, featuring Republican Party of Florida Executive Director Helen Ferre Aguirre, who is Nicaraguan-American, Trump Advisory Board Member Bertica Cabrera, who is Cuban-American, and Congressional District 7 nominee Leo Valentin, and House District 48 nominee Jesus Martinez, who are both Puerto Rican, and both of Orlando.

Ferre Aguirre pointed out that the country saw record low unemployment rates for both Latinos and African Americans before the pandemic, stating “We’re going to see that robust economy that we had before.”

She also touted the superior ground game of Trump Victory, “We’ve been here all along. We don’t need an election to bring us here. Hispanics are an important part of our community, an important component of our grassroots efforts.”

nextLast Call for 9.15.20 — A prime-time read of what’s going down in Florida politics