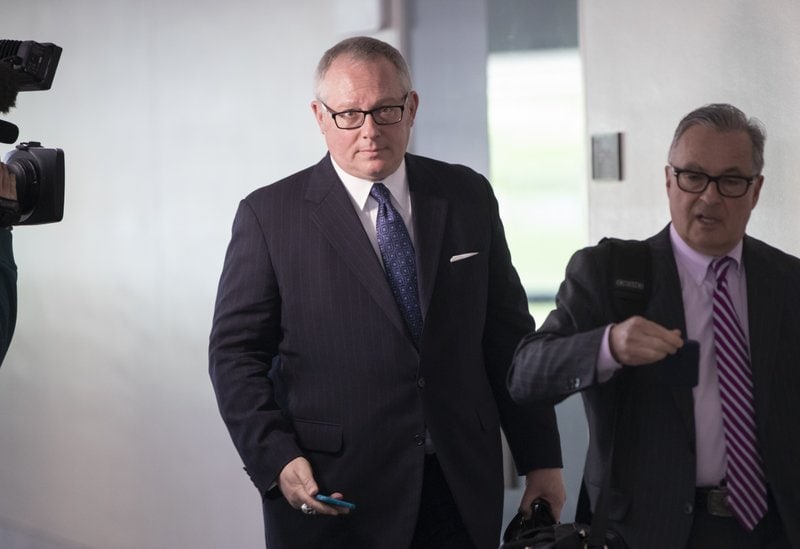 A Trump health appointee is taking a leave of absence after allegations of political interference in the federal coronavirus response, followed by a personal video that warned of election violence and all but equated science with resistance.

Michael Caputo has decided to take 60 days “to focus on his health and the well-being of his family,” the Department of Health and Human Services said in a statement.

Fiercely loyal to President Donald Trump, Caputo had been serving as the department’s top spokesman, a post that usually is not overtly political. He was installed by the White House in April during a period of tense relations with the president’s health secretary, Alex Azar.

Caputo, who has no health care background, was the subject of news reports last weekend that he tried to gain editorial control over a scientific weekly published by the Centers for Disease Control and Prevention. That was followed by reports about a video he hosted on his Facebook page in which he likened government scientists to a “resistance” against Trump and warned that shooting would break out if Trump won the election and Democrat Joe Biden refused to concede.

Caputo’s declarations came as Azar and other top health care officials are trying to convince skeptical Americans that science will have the final say in the approval of coronavirus vaccines. Washington Sen. Patty Murray had called for his resignation; Republican senators remained publicly silent.

Leaving the department is Paul Alexander, who was brought in as a policy advisor to Caputo on a temporary basis, the department’s statement said.

Caputo’s short tenure was marked by devotion to Trump, disdain for Democrats and the media, along with some scientists, as well as a well as hints that he felt personally hounded by political enemies.

In an taxpayer-funded HHS podcast July 31, he spoke of having “a target on my back.” Caputo also accused Democrats in the government, along with the news media, of not wanting a vaccine so as to punish the president.

Caputo had once joked that “everything I learned about health care I learned from the Obamacare website,” and that “I’m science-stunted.”

His resume has taken him through Trump’s turbulent world in recent years, and he displayed a political operator’s instinct to trade punches.

An Army veteran with a background in media, Caputo played a leading role in Trump’s 2016 New York state Republican primary victory and later moved over to the national campaign.

He has described himself as having a fraternal relationship with political operative Roger Stone, the longtime Trump ally whose 40-month sentence for witness tampering, false statements and obstructing a congressional investigation into Russian election interference was commuted by the President.

Stone is “like my big brother,” Caputo told the House Intelligence Committee in 2017. “We’re very different, but I love him very much.” He said he would talk to Stone every day.

Caputo made a cameo appearance in the Robert Mueller investigation into Russian election interference. Mueller’s report noted that Caputo had put Stone in contact with a Florida-based Russian businessman who claimed to have dirt on 2016 Democratic presidential candidate Hillary Clinton. But Stone refused to pay for the information that the businessman claimed to have and nothing came of it.

In his testimony to the House Intelligence Committee, Caputo said that he never discussed the Trump campaign with anybody associated with the Russian government. He described himself as no fan of Russian President Vladimir Putin.

Caputo is also the author of a recent book, “The Ukraine Hoax,” which claims the president’s “phony” impeachment was rooted in a vast conspiracy. Trump was acquitted by the Senate.

On the Amazon.com page where Caputo’s book is sold, it reads:

At HHS, Caputo became closely involved with communications for Operation Warp Speed, the government’s effort to have coronavirus vaccines ready to ship to Americans once approved by the Food and Drug Administration.

His undoing seemed to come when he allegedly tried to exert influence over a CDC publication known as the MMWR, or Morbidity and Mortality Weekly report. MMWR articles are technical, but they have revealed telling details about the pandemic, sometimes seized upon by Trump’s critics.

On one of his HHS podcasts, Caputo unburdened himself to Dr. Anthony Fauci about his own struggles with science as a young man. Caputo said he wanted to be an engineer, but wound up getting a journalism degree. Fauci is the government’s top infectious disease specialist.

“I’m science-stunted,” Caputo told Fauci. “I have a problem, I think, like most Americans. But now that I’ve been here for a little while, I understand that science is kind of an iterative process. And it’s one that eventually you arrive at the absolute truth.”

In this article:Donald Trump, Health and Human Services, Michael Caputo