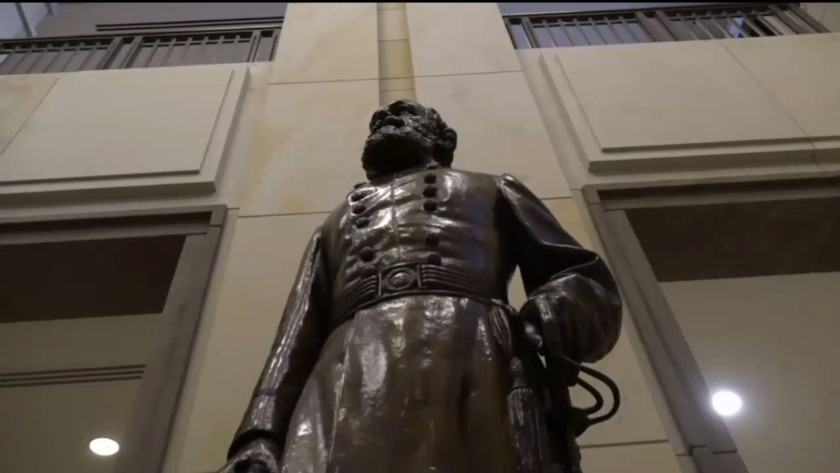 "We are not making any immediate decisions for an alternate location.”

Florida will hold off for now on deciding the future home of a statue of a Confederate general that has represented the state at the U.S. Capitol for nearly a century.

More than two months after Lake County commissioners reversed an earlier decision for their community to accept the bronze likeness of Confederate Gen. Edmund Kirby Smith, Mark Ard, a spokesman for Secretary of State Laurel Lee, said the future of the Smith statue is not resolved.

State lawmakers voted in 2016 to replace the Smith statue at the National Statuary Hall amid a nationwide backlash against Confederate symbols that followed the 2015 shooting deaths of nine black worshippers at a historic black church in Charleston, South Carolina, lawmakers later decided to use a statue of educator and civil-rights leader Mary McLeod Bethune to represent the state.

“The statute of General Edmund Kirby Smith will remain in place in Statuary Hall until the statue of Dr. Mary McLeod Bethune is ready for placement, and we are not making any immediate decisions for an alternate location,” Ard said in an email Thursday.

The office of U.S. Rep. Kathy Castor, a Tampa Democrat, announced Thursday that sculptor Nilda Comas has been given the go-ahead to begin work on the statue of Bethune. The state will receive word soon that a last preliminary step involving the architect of the Capitol has been completed, Castor’s office said.

“In a remarkable feat of industriousness that Dr. Bethune would surely love, Nilda is using the last marble hunk of its size pulled from the historic quarry also used by Michelangelo for his sculpture of ‘David’ 500 years ago,” Castor press secretary Rikki Miller said in an email Thursday.

The statue when complete is expected to be 8 feet tall and stand on a 3-foot base.

No arrival date in Washington, D.C., has been set for the statue.

Bethune in 1904 founded what became Bethune-Cookman University in Daytona Beach and later served as an adviser to President Franklin Roosevelt.

On July 7, Lake County commissioners reversed support they had given a year earlier to the Lake County Historical Society and Museum to house the Smith statute in the historic courthouse in Tavares.

County commissioners said the anticipated arrival of the Smith statue in Lake County created divisions. In their reversal, they pointed to the St. Augustine-born Smith having no ties to Lake County.

As commander of Confederate forces west of the Mississippi, Smith was considered the last general with a major field force to surrender in the Civil War. He spent his later years as a college professor in Tennessee.

Last year, the Lake County historical society’s board of directors said the pursuit of the statue was not an attempt to glorify Smith or the Confederacy. The board argued that when Smith was born, Lake County was part of St. Johns County, which includes St. Augustine. Lake County was founded in 1887.

The society intended to include in the display information about Bethune’s achievements and the movement to remove Confederate monuments from public squares.

The Smith statue has served as one of Florida’s two representatives in the National Statuary Hall since 1922. The state’s other statue depicts John Gorrie, widely considered the father of air conditioning.

nextTakeaways from Tallahassee — A Cinderella dilemma