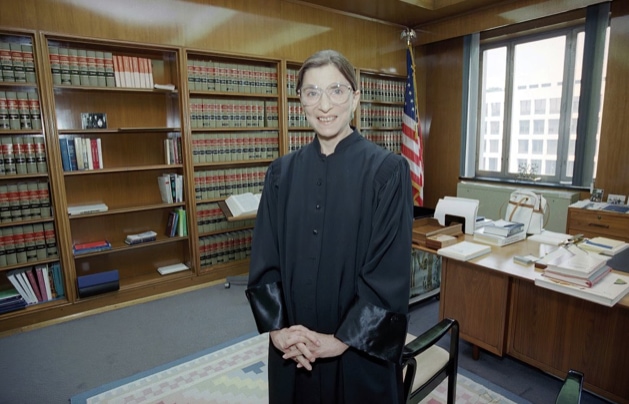 I received a call this morning from my father, retired U.S. Air Force Lt. Col. Frank Powers. He wanted to talk about Ruth Bader Ginsburg.

My father spent three full decades in the Air Force, much of it as a personnel officer. We never talked much about his work because personnel cases were private. He also has been a lifelong Republican.

So on the morning after Ginsburg’s death, I was a bit surprised when he called to talk about her.

He brought up this personnel case he was involved in from the early 1970s when we were assigned to Minot A.F.B. in North Dakota. I was 12 or 13 then.

Capt. Struck had done the unthinkable for a military officer back then. She got pregnant. The military, my father told me, had a firm policy. An ugly policy. The Air Force sent her an order offering her two choices. She could have an abortion, or she could resign her commission and be discharged.

Struck, who was single, was interested in adoption. But that would make no difference in the military’s position about her. Pregnancy was a dischargeable condition. If she continued her pregnancy, she’d be out.

She hired a lawyer named Ruth Bader Ginsburg, then general counsel for the Women’s Rights Project of the American Civil Liberties Union.

The case eventually affected just about everything regarding the status of women in the American military, my father said.

Ginsburg’s life and career are rightly remembered and celebrated today. As with Thurgood Marshall before her, she already had done enough just as a lawyer to be forever recognized for her legacy to America — even if she’d never become a judge, a Supreme Court Justice, or the Notorious R.B.G. Cases she won before the Supreme Court of the United States in the 1970s redefined so much about gender equality in America.

But not all her mountain-moving cases were decided by the High Court. Many of her most impactful cases show up only in the fine print of today’s already voluminous obituaries, if at all.

If the Struck case is remembered much at all, it is because Ginsburg often said she thought it could have been a better case than Roe v. Wade to test America’s abortion laws, and she would have liked to have pursued it as such.

Instead, Ginsburg laid out what some legal scholars have said became an important new idea. It redefined not only Struck’s dispute with the military, but situations of other women in many other areas of American life: that many pregnancy work rules aren’t there to help women but to perpetuate male dominance.

In a Struck brief, Ginsburg wrote, “Heading the list of arbitrary barriers that have plagued women seeking equal opportunity is disadvantaged treatment based on their unique childbearing function. Until very recent years, jurists have regarded any discrimination in the treatment of pregnant women and mothers as ‘benignly in their favor.’ But in fact, restrictive rules, and particularly discharge for pregnancy rules, operate as ‘built-in headwinds’ that drastically curtail women’s opportunities … presumably well-meaning exaltation of woman’s unique role in bearing children has, in effect, restrained women from developing their individual talents and capacities and has impelled them to accept a dependent, subordinate status in society.”

Struck v. Secretary of Defense was, in fact, appealed to the Supreme Court of the United States. However, the Department of Defense looked at its hand, looked at Ruth Bader Ginsburg across the table, and folded.

The resulting settlement involved a long, new directive that changed personnel rules, policies, and protocols regarding women throughout the services.

The bottom line was this: Before Struck, men serving could become fathers, but women service members couldn’t become mothers.

I’m struck by how much, as my father explained, the case changed the military opportunities for women. Some changes came immediately for those serving in 1972. The rest, for countless women, came about at least in part because the military eventually was forced to reexamine all its assumptions about gender rules and services that were needed, from maternity leave to child care.

Ginsburg’s “built-in headwinds” to opportunities observation was a factor too. The military had effectively barred or at least greatly discouraged women from many high-investment opportunities in the services, like flying or enrollment in the academies. The military had feared those investments would be wasted if women got pregnant and discharged.

That the Struck case might not make it onto a “Ruth Bader Ginsburg’s Greatest Hits” album suggests how deep her body of work is, and how much has changed in America due to her work.

Back in the ’70s, Ginsburg and others advocated these battles to help their daughters and granddaughters.

Fast-forward a couple of generations: Our daughter Gislaine Delgado — my parents’ granddaughter — served active duty in the U.S. Army for eight years, and now continues serving in the Army Reserves. Along the way, she’s given birth to her two sons, our wonderful grandsons, my parents’ great-grandsons.

Sgt. Delgado and countless other women have been granted the support and services they need to continue proudly serving their country in uniform, and still be mothers.

All because of a fine-print case in Ruth Bader Ginsburg’s portfolio.