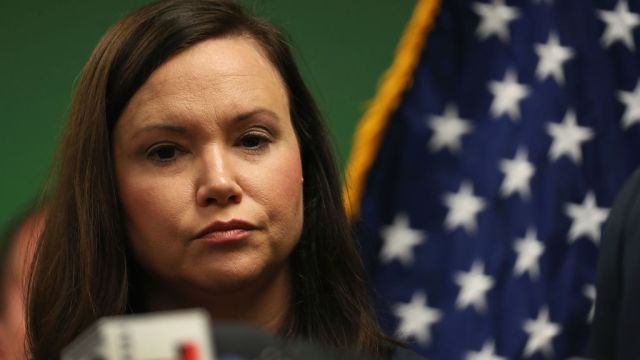 Florida Attorney General Ashley Moody has asked the FBI and Florida Department of Law Enforcement to investigate allegations of bribery and vote-buying against billionaire Michael Bloomberg.

At Gov. Ron DeSantis‘ request, the Attorney General launched an initial investigation into the former Democratic Presidential candidate and New York Mayor’s plan to pay off the debts of felons in Florida to earn them back the right to vote.

Bloomberg is part of an effort that raised more than $20 million dollars to help felons who have completed their prison sentences vote in the presidential election, a story that first broke when the Washington Post obtained a memo detailing that plan. In Florida, felons must have served their sentence and paid all court costs, fines, fees and restitutions to have their voting rights restored.

“It’s not every felon. It’s just those which they have specifically identified as the Biden voters,” Gaetz said on Fox Business Tuesday afternoon. “That’s offering a bribe, an inducement, for someone to behave a certain way in voting.”

Later that day, Gaetz said he had spoken to Moody and that “a criminal probe may already be under way.”

The following morning, U.S. Sen. Rick Scott hopped on the same channel to comment that Bloomberg’s commitment to pay off debt for 32,000 potential voters via the Florida Rights Restoration Coalition ultimately wouldn’t affect the outcome in November.

Scott was cooler than Gaetz on the matter of potential illegality, noting that “the courts will end up deciding” and “the issue’s been in the courts for a while.”

In the letter to FDLE Commissioner Robert Swearingen and FBI Special Agency in Charge Michael McPherson, Moody referenced an advisory opinion offered by the Division of Elections in 2016 in the case of a political committee and vote-buying accusations.

“Incentives could be offered to a voter in a way that would be designed to directly or indirectly cause the voter or a larger group of voters to vote in a particular manner. In such a case, the person giving the incentive could be guilty of violating section 104.061, Florida Statutes, which makes it illegal to ‘directly or indirectly give or promise anything of value to another in casting his or her vote,'” wrote the then-Director of the Division of Elections, Maria Matthews.

Florida Chief Financial Officer Jimmy Patronis, who served on the Florida Elections Commission from 1998 to 2003, requested the commission investigate whether Bloomberg is trying to illegally influence the outcome of Florida’s election. He noted that the story “doesn’t smell right to me.”

“Clearly, Bloomberg is using his money and power to tilt the upcoming election in November,” Patronis said. “If he wants to make a political donation – there’s a process but hiding behind voting rights groups appears to circumvent Florida law. Florida’s Elections Commission is a great authority for determining to what degree Bloomberg has broken the law.”

Bloomberg’s efforts come in addition to the $100 million he has pledged to help former Vice President Joe Biden win Florida, a crucial state with 29 electoral college votes that President Donald Trump hopes will keep him in the White House.

Agriculture Commissioner Nikki Fried, the last of three Cabinet members along with Moody and Patronis to weigh-in on the investigations and Florida’s sole statewide-elected Democrat, ridiculed Republicans for launching the probe.

“Florida Republicans will stop at nothing to prevent people from voting, and this is another ploy to suppress the voices of those trying to regain their right to vote,” Fried said. “Whether Mike Bloomberg, John Legend or LeBron James, these are contributions made legally and in good faith to FRRC’s mission of helping people rightfully regain the right to vote.”

“This shouldn’t be a partisan issue,” the Commissioner added. “More than 5 million Floridians on both sides of the aisle voted for this in 2018. It’s unfortunate that the Republican Party views denying people the right to vote as a necessity in their path to victory in 2020.”

Coalition Executive Director Desmond Meade denied Wednesday that the money raised by Bloomberg is being used to target Black and Hispanic voters to shore up support for Biden.

“We don’t care what people’s political party is. What we care about is if they was impacted by a felony conviction and they want to take part in our democracy,” Meade told reporters.

Earlier Wednesday, DeSantis and Patronis blocked a request by Meade, a former drug dealer, for a pardon from the state Board of Executive Clemency.

A law school graduate who made it onto Time magazine’s list of the 100 most influential people last year, Meade was at the forefront of passing a 2018 constitutional amendment, known as Amendment 4, to restore voting rights to convicted felons.

Coalition Deputy Director Neil Volz, whose request for restoration of civil rights was approved Wednesday by the Board of Executive Clemency, said the group is focused on providing resources so “returning citizens” can register to vote.

“This is a movement about people, people who see each other along the lines of humanity. We know that there’s people who are engaging and donating for other reasons, but our primary north-star focus is returning citizens, all returning citizens across the state of Florida,” Volz said.

Felons and their advocates are racing against an Oct. 5 deadline to register to vote in the Nov. 3 election.

“The right to vote is fundamental to our democracy, and no American should be denied that right,” Bloomberg said in a statement released by the coalition.

Volz said Tuesday his organization already has spent $5 million to clear up the court-ordered debts of about 5,000 convicted felons.

The effort intensified following a Sept. 11 ruling by the Atlanta-based 11th U.S. Circuit Court of Appeals that overturned a decision by a district judge, who said in May that the state cannot deny the right to vote to felons who are “genuinely unable to pay” court-ordered financial obligations. Voting-rights groups that challenged the law alleged that linking voting rights and finances amounts to an unconstitutional “poll tax.”