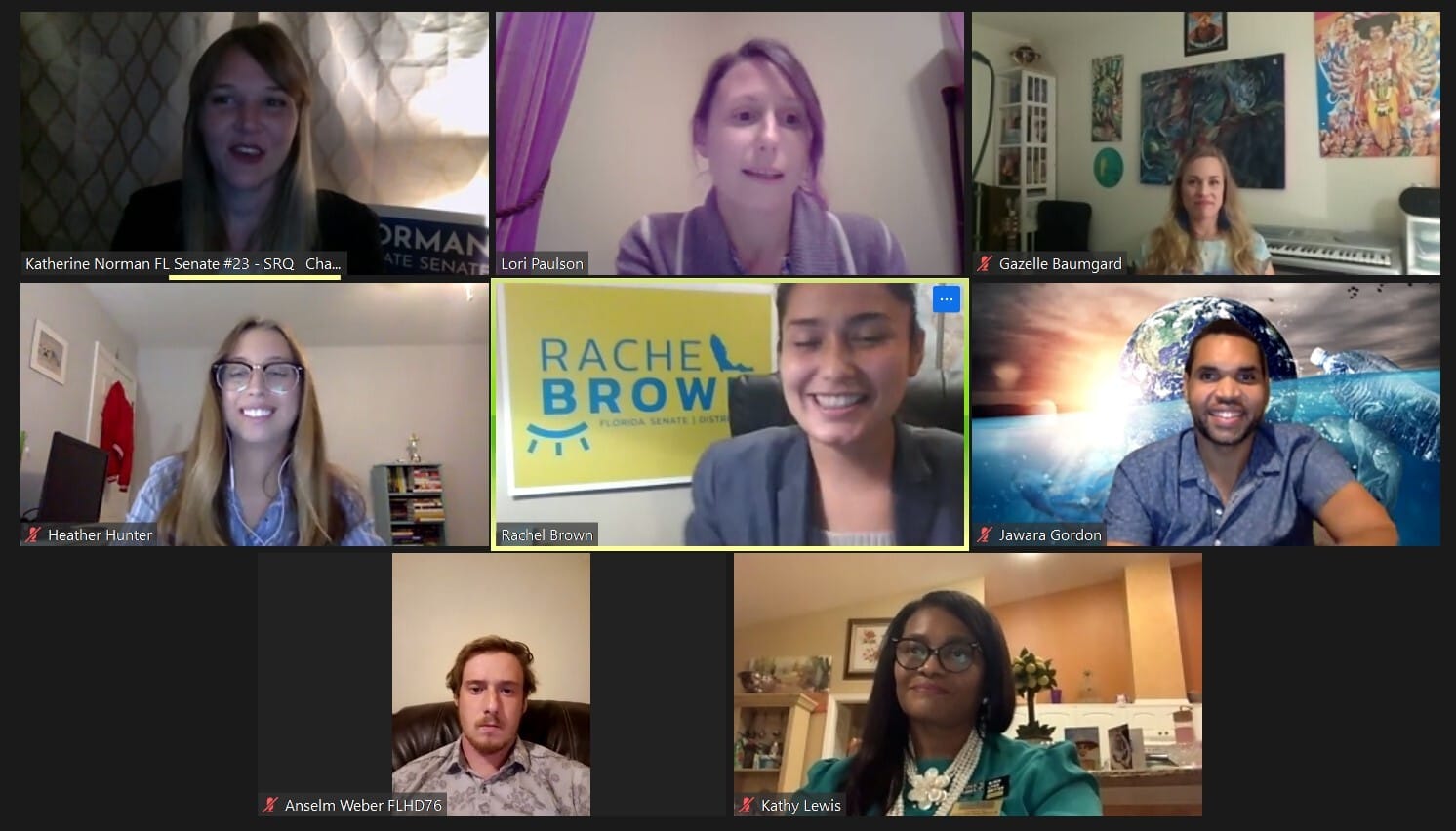 'It’s time for us to go beyond ruffling feathers.'

Rachel Brown, Heather Hunter, Kathy Lewis and Katherine Norman joined together to draw attention to similar environmental platforms. While all four are widely considered underdogs in their campaigns, they made clear a shared desire for radical change on Florida policy toward the earth.

“We need bold people in office, people who are unafraid,” Lewis said.

Each candidate signed on to the Florida Climate and Economic Defense Initiative, an effort marketed as a state version of the Green New Deal advanced by progressives like U.S. Rep. Alexandria Ocasio-Cortez in Congress. The plan calls for a massive investment in clean energy infrastructure and incentivizing the deployment of green technologies.

Lewis filed in Senate District 20 against Republican Danny Burgess, two years after challenging outgoing Sen. Tom Lee for the same seat. Of all the candidates at the forum, she’s in the most competitive district, though she’s trailing Burgess massively in finances.

She made no bones about her long-shot status, but said candidates running must stand for something significant if they bother to make a case to voters at all.

But Lewis said she’s been as disappointed with Democrats as Republicans in the Legislature go along with weak efforts branded “water quality” initiatives. She called the Clean Waterways Act signed by Gov. Ron DeSantis this year and approved unanimously by the House and Senate a “joke,” for example.

“Let’s say the world turns upside down and I win,” she said. “We will continue to see this bad legislation and I will speak out against it.”

Several candidates shared that sentiment. Brown, running against Rep. Ray Rodrigues for the open Senate District 27 seat, serves on the Rights of Nature board and said language in a statute barring lawsuits on behalf of ecosystems undermined any positive actions.

Allowing lawsuits on behalf of natural habitats and wildlife would protect from pollution, overdevelopment and other threats to Florida’s environment, she said.

Norman, who is challenging Sen. Joe Gruters in Senate District 23, said she’s concerned as a mother  to young children about how little the state has done proactively to protect the planet.

”We are doing less than nothing to prevent pollution and protect environmental rights as a human race and our rights as a planet,” she said, saying subsidization of many industries involved in pollution makes the state responsible for much of the damage.

She dismissed actions like raising fines, touted by Gruters in his first television ad this year, as complacent and backward-looking. Similarly, she told Florida Politics she’s not impressed with investing further in research on red tide when the causes of such disasters are well known. The state should instead block the release of biosolids into waterways and take other proactive measures that ensure the environment doesn’t take a hit in the first place.

“Our main tourist areas are downtown, with historic buildings,” she said. “There are so many things that will be destroyed if we don’t do anything. We can build seawalls, but eventually we have to address the problem at hand.”

In a forum featuring female Senate candidates, the group noted women leaders historically have been more focused on sustainability and long-term solutions. Women as a demographic globally feel the burden of child-rearing and suffer the brunt of community disruption caused by climate change, the group said. Now may be the time for the Democratic candidates to be elected to the Florida Senate.

“It’s time for us to go beyond ruffling feathers,” Lewis said. “We have to completely change the way we govern.”

previousSunburn — The morning read of what’s hot in Florida politics — 9.30.20