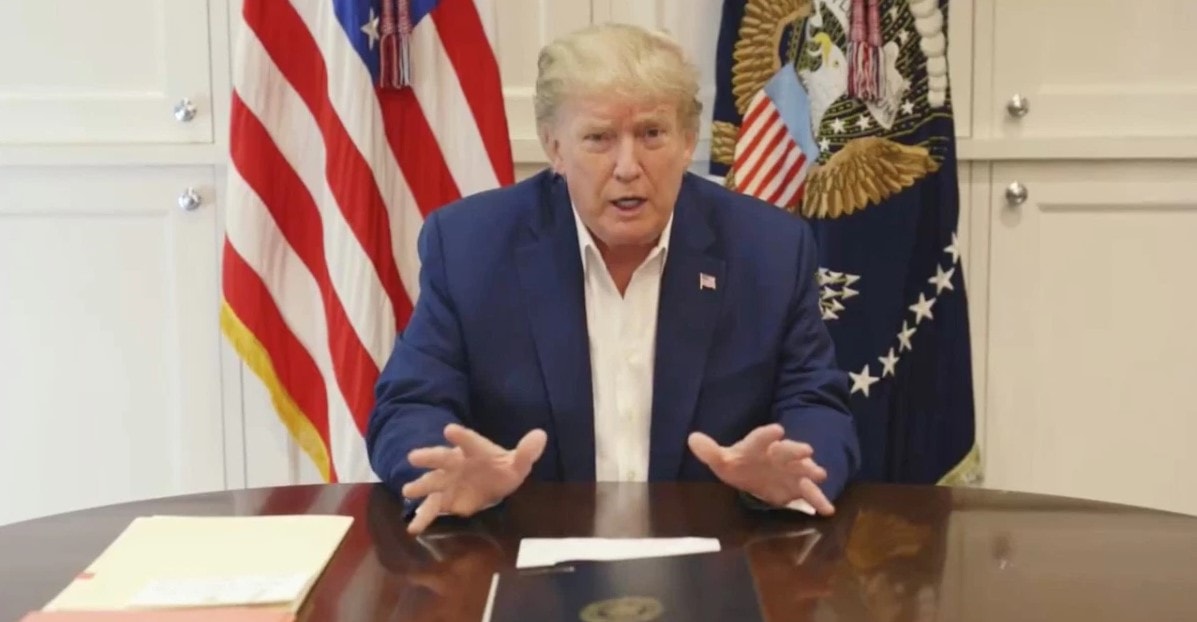 President Donald Trump says he’s leaving the military hospital where he has been treated for three days for symptoms of COVID-19 and will continue his recovery at the White House.

Trump’s Twitter announcement was confirmed by his team of doctors Monday afternoon, who said he met all criteria to be discharged and that he would continue treatment at a medical unit in the White House.

Trump tweeted: “I will be leaving the great Walter Reed Medical Center today at 6:30 P.M. Feeling really good! Don’t be afraid of Covid. … I feel better than I did 20 years ago!

He is expected to make the journey aboard the presidential helicopter, Marine One.

Trump’s return comes as the White House is still learning of the scale of the outbreak within the complex. Press secretary Kayleigh McEnany tested positive for the coronavirus Monday morning, as did two of her deputies.

At a a press briefing Monday afternoon, Trump’s physician, Dr. Sean Conley said the White House has a medical unit that is equipped to provide “world class medical care” and is staffed around the clock with medical staff.

Conley said, “Though he may not entirely be out of the woods yet,” Trump has “met or exceeded all standard hospital discharge criteria” and had not run a fever for 72 hours. He will continue taking anti-COVID-19 medicines at the White House. Conley said Trump’s oxygen levels and other vital signs.

Conley also said Trump was in chartered territory, considering how he received aggressive treatment very early in his infection. Conley said it will be important to track his health progress through the weekend.

Trump has received three doses of Remdesivir, a broad-spectrum antiviral medication. He will receive a fourth dose before he leaves, and will receive a fifth back at the White House. He also has received steroids. The President has not received hydroxychloroquine, the COVID-19 experimental treatment that Trump had promoted through much of the year. Conley said there was “no evidence” of live virus” in Trump’s most recent tests.

Conley stopped short of giving details of several aspects of Trump’s diagnostics, condition and treatment, such as of what lung scans might have revealed, citing federal health information privacy laws.

Conley said he expects arrangements for Trump to have access to parts of the White House residence and Oval Office area, wherever it can be made safe.

“We try to get patients home and out of the hospital as quickly as is safe and reasonable. Every day a patients stays in the hospital unnecessarily is a at risk to themselves.,” Conley said out front of Walter Reed. “Right now there is nothing that is being done upstairs here that we can’t safely conduct down home.”

Trump “is ready to get back to a normal work schedule” and was optimistic about a Monday release, White House chief of staff Mark Meadows told Fox News. He said a determination would be made after further evaluation by his medical team later Monday.

Less than one month before Election Day, Trump was eager to project strength despite his illness. The still-infectious president surprised supporters who had gathered outside the hospital, riding by Sunday in a black SUV with the windows rolled up. Secret Service agents inside the vehicle could be seen in masks and other protective gear.

Staff from Florida Politics contributed to this report.