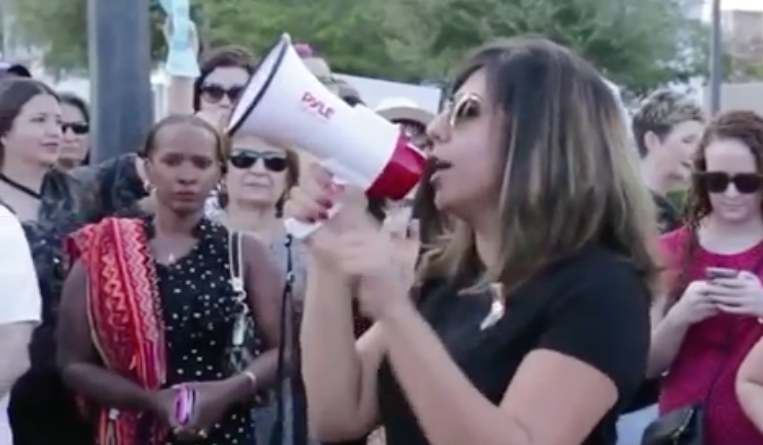 Among other claims, the site accuses Eskamani of wanting to take away male influence.

A new political committee website is using Democratic Rep. Anna V. Eskamani‘s record, statements, tweets, and photographs to suggest a portrait of someone who is wildly radical and unacceptable for House District 47, where she’s seeking reelection.

Eskamani is responding by charging the site as an “offensive, transphobic, dog-whistle website littered with lies.”

The site AnnasGottaGo.com, run by the Central Florida Leadership Fund, often makes points that Eskamani has proudly embraced but puts them in contexts to outrage strong conservatives, such as her support for abortion rights, which the site lays out with a headline, “If abortion is murder, then …;” or her strong advocacy for gun law reform, which the site notes has drawn her an F-rating from the NRA.

The site also seeks to tie her to people and activities Eskamani would not prefer, including stretching some relationships to provoke guilt-by-association, such as a photograph of her having lunch with Joel Greenberg, the Republican former Seminole County Tax Collector who is charged with multiple felonies. He donated $100 to her campaign unsolicited, but she refunded it.

The site includes some disturbing pictures and comments. These include a police photo of former Democratic gubernatorial candidate Andrew Gillum, nude and passed out in a Miami Beach hotel room, in the infamous March incident that led Gillum to enter rehab. That photograph was included in a section entitled, “Meth, Alcohol, Male Prostitutes and Anna’s Choice for Governor.”

“We wanted to give the voters of Florida House District 47 an opportunity to see the full and unvarnished truth about their sitting State Legislator, Anna V. Eskamani,” Aaron McKuhen, chair of Central Florida Leadership Fund, said in a news release.

Eskamani dismissed the site as “a joke site from a joke candidate who is too scared to even debate me.”

“While he has been wasting time on an offensive, transphobic, dog-whistle website littered with lies, we’ve been securing unemployment benefits for thousands of Floridians and helping our small businesses survive this pandemic. District 47 elected a happy warrior to fight for them, and I’m not stopping,” Eskamani added in her response.

“It doesn’t seem to be attacking her personally, only her judgment, her record as a legislator and her attitude and responses toward certain groups of people. I’m really not sure why she’s attacking me personally or why she’s mad,” Sisson said. “If she’s going to be mad at anyone, it should be at herself for voting consistently against the business community, for voting against a better future for our children and for being a very ineffective legislator in Tallahassee. Honestly, I may not have even decided to run for this office, had she accomplished anything of significance.”

Sisson contributed $1,000 to the political committee, according to the latest reports available from the Florida Division of Elections.

Through Sept. 25. Central Florida Leadership Fund had collected a total of $4,575 and spent $3,593. No expenditures related to a website had shown up yet in the filings.

The site catalogs Eskamani in 10 categories with such labels as “Ineffective Legislator,” “Lack of Judgment,” “Socialism & Antifa,” “Defund the Police,” “Christian Community,” “Men,” and “2nd Amendment.”

In those, the website takes some of Eskamani’s statements and tweets, and some by her staff, and puts them into new contexts. For example, Eskamani’s efforts last year to challenge tax breaks for Christian schools that discriminate against gay students is cited as an affront to both Hispanics and African Americans, by limiting school choice for them.

Under Christian Community, the site declares, “Anna is a proud progressive, liberal, secularist,” and says she “actively opposes the biblical worldview on family and marriage and embraces secularism.”

Under Men, the site states, “Her mantra is ‘F*ck the Patriarchy’. If you’re a man, she means to actively take your position and influence away from you.”

HD 47 may have a share of the kind of hard-core conservatives the site appears to be targeting, but the district is better known for its swath of progressive neighborhoods through the downtown Orlando area. Democrats hold an 8 point advantage in voter registration.

In the 2018 cycle, Republican Stockton Reeves also tried to tie Eskamani to harsh rhetoric and radicalism, though in a far more civil manner. She turned around some of his criticisms in her own advertising to attract support among progressives. That was a highly contested election, with Reeves spending more than $260,000 and Eskamani $450,000.