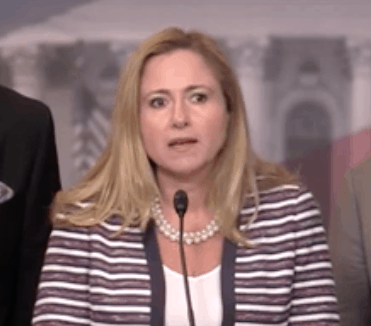 The ad rehashes allegations dating back to 2018, when Mucarsel-Powell won the seat from a GOP incumbent.

Mucarsel-Powell is battling Miami-Dade Mayor Carlos Giménez, a Republican, in the race.

The CLF — a super PAC aimed at electing Republicans to the U.S. House — released a similar ad in late September. The fresh 30-second spot repackages allegations dating back to 2018 and references work Mucarsel-Powell’s husband did for companies owned by Ihor Kolomoisky.

“This town is far too familiar with violent thugs,” the ad’s narrator begins as images of South American dictators flash across the screen.

The Congresswoman’s husband, Robert Powell, worked as a lawyer at several firms owned by Kolomoisky but said he never directly answered to the man. Powell told the Miami Herald, “I have never worked for, represented, answered to, or received any payment from Mr. Kolomoisky at any time.”

A 2010 court order belied that claim, saying it appears Powell “answers” to Kolomoisky.

Nevertheless, there are no allegations Powell or Rep. Mucarsel-Powell were involved in any of Kolomoisky’s shady activities. The CLF also sought to tie the Democrat to Kolomoisky during her first run for the CD 26 seat in 2018. She went on to oust Republican U.S. Rep. Carlos Curbelo that cycle.

The newest CLF spot in CD 26 comes as part of a package of 21 new ads in tight congressional races across the U.S. CLF Communications Director Calvin Moore released an alarmist statement, largely devoid of support, attacking Democrats in CD 26 and beyond.

“Say goodbye to your paycheck, middle class jobs and the local police being ready to help at a moment’s notice if Democrats remain in control of Congress,” Moore said.

“Americans just can’t risk Democrats’ dangerous agenda that will not only upend the American way of life, but put our jobs, financial well-being and personal safety at risk.”

It should be noted that Democrats are not proposing removing paychecks or middle-class jobs. Local police are also run by local governments, not the U.S. Congress.

Mucarsel-Powell’s race is expected to be tight, however. Mucarsel-Powell has said she expects the contest to be “one of the toughest” races in the country this cycle.

Several election forecasters currently see the CD 26 contest as a toss-up. FiveThirtyEight released their first House projections earlier Wednesday and pegged CD 26 as the closest congressional race in Florida, though Mucarsel-Powell is nearly a 3-to-1 favorite.

Democratic presidential nominee Joe Biden recently backed Mucarsel-Powell, signaling Democrats’ desire to bring attention to the contest. Outside groups have repeatedly made plays in the race, both on behalf of Mucarsel-Powell and Giménez. That concerted effort shows the extent to which both sides believe the seat is in play this Nov. 3.

In July, the CLF released a poll showing Giménez, their preferred candidate, leading Mucarsel-Powell 47%-42%. That was within the survey’s margin of error.