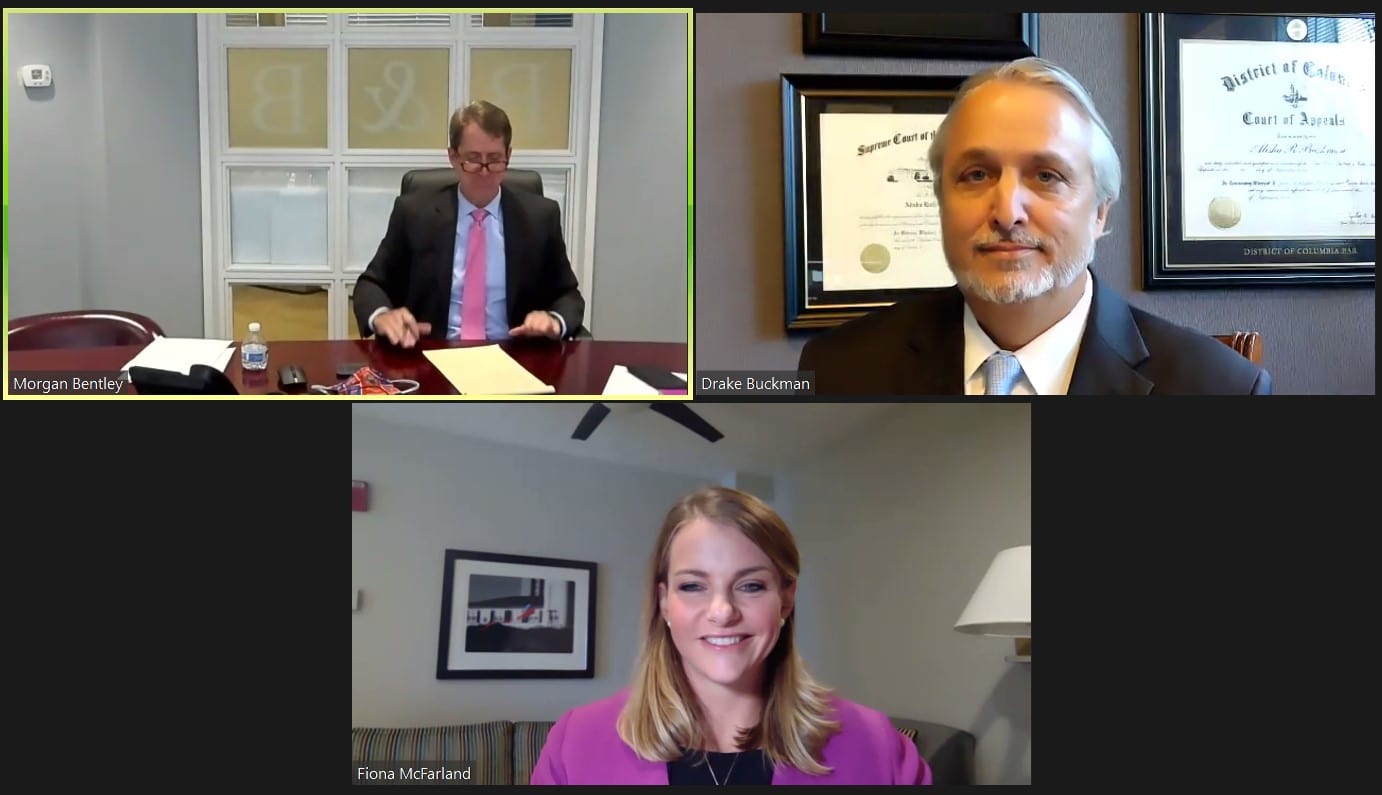 The candidates faced off at Tiger Bay.

A debate between Drake Buckman and Fiona McFarland in House District 72 showed both candidates calling for less partisanship. But both also largely sided with positions taken by party leadership in Tallahassee.

Buckman, a Sarasota Democrat, slammed a planned toll road through the Florida Heartland. McFarland, a Sarasota Republican, took a stance against Medicaid expansion. Both candidates indicated disagreement with a proposed overhaul of Florida’s primary system, a rare issue putting both state parties in lockstep.

But each candidate made clear they intend to put the local needs and values of the greater Sarasota community ahead of party priorities.

At a Sarasota Tiger Bay event, a forum started with candidates being asked about their thoughts on national leadership. McFarland, whose mother K.T. McFarland served in the Donald Trump administration, was pressed on where she disagrees with the President.

“Most viscerally is the communication style,” she said. “I expect a different sort of comportment from the Commander-in-Chief and the office… I wish the tweets would stop.”

Similarly, moderators asked Buckman if he felt closer to the Joe Biden or Alexandria Ocasio-Cortez wing of the party. The Democrat pushed back on the premise.

“I don’t apologize for my party,” he said. “… We speak with a big variety of voices. It’s a vibrant party and very inclusive. We are not tied to one great, dear leader who must never be offended.”

The assertion of independence from both candidates likely reflects the desire for both to reach nonpartisan voters in a battleground district. This seat, which hasn’t seen a Representative serve a full eight years since the implementation of term limits began, is held now by Democrat Margaret Good. The incumbent, who won the seat in a 2018 Special Election, ran for Congress instead of reelection this year.

On numerous issues, Buckman criticized Republican rule in Tallahassee, like the funding of Florida Forever, though McFarland said on that issue she supports fully funding the land conservation trust.

A point of difference, though, came in support for a Medicaid expansion. Buckman said the pandemic showed the need to bring the issue up anew.

“Medicaid has to be expanded in Florida. There is no real alternative,” he said.

McFarland, though, said she’s opposed to a full Medicaid expansion and sees other ways to deal with health care costs.

“There’s some creativity we have seen work well in other states,” she said, including “incentivizing not-for-profit organizations to step forward.”

That would make McFarland the first District 72 Representative, Republican or Democrat, to oppose Medicaid expansion. But that puts her more in line with House leadership.

Neither candidate expressed much warmth for Amendment 3. While both said they would like to see ways to include more independent voters, the top-two primary on the ballot didn’t seem a good option. Drake said it was important to have party primaries select nominees for the general, and McFarland said the language of the amendment was imperfect.

On the potential of Heartland Parkway and other toll roads championed by Senate President Bill Galvano last year, McFarland supported the plan while Buckman called it a giveaway.

McFarland noted the road will need to be justified through the Department of Transportation to move forward but said it will be valuable to the vitality of rural Florida, including Southwest Florida.

“The economic prosperity and technological advances in rural communities is important, and this will bring wide-ranging infrastructure improvement,” she said. “Sewer, water, broadband.”

But Buckman suggested the road was needless and a giveaway to developers and concrete contractors.

“All of us need those billions of dollars in this state to fight COVID,” he said.