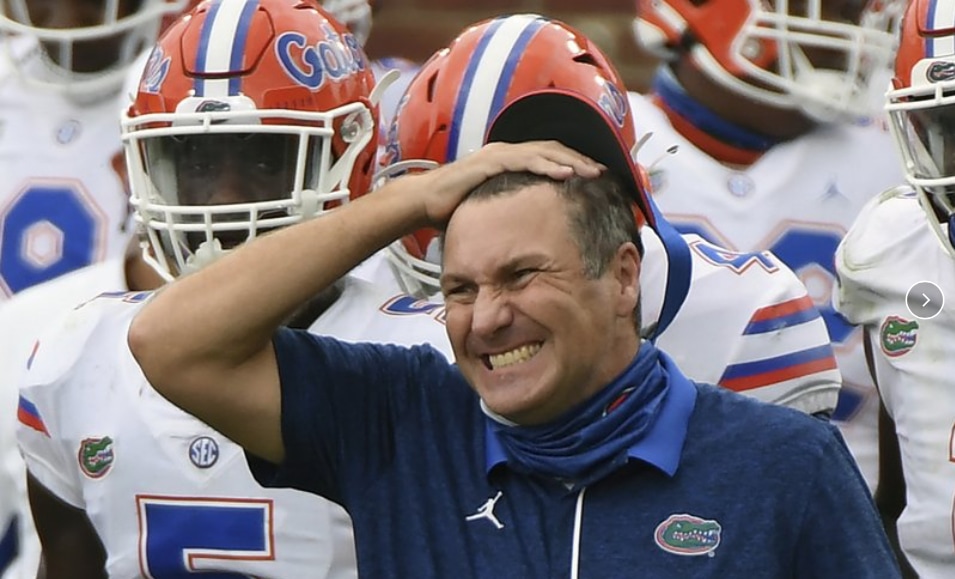 No. 10 Florida paused all team activities Tuesday following “an increase in positive COVID tests among players.”

Athletic director Scott Stricklin said the decision was made “out of an abundance of caution.” Stricklin says coach Dan Mullen has spoken with players and parents and adds that he told last week’s opponent, Texas A&M, and Saturday’s opponent, defending national champion LSU.

Stricklin added that the situation “will be re-evaluated by UF Health and the athletic department’s sports medicine staff Wednesday.”

The move comes three days after Mullen’s eyebrow-raising comments about wanting 90,000 fans at Florida Field to create a better home-field advantage against the Tigers. Mullen didn’t double down Monday, but he didn’t back down, either.

Mullen made those comments after the Gators’ a 41-38 loss at Texas A&M last Saturday.

No college or professional team in the Sunshine State has moved beyond a small percentage of fans in attendance. The Gators had 2,000 of a nearly 17,000 allotment unsold for their home opener against South Carolina two weeks ago.

Mullen brushed aside criticism for his postgame comments and praised his players for how well they have handled safety protocols.

“I think if you look at what we’ve been able to do, the safety precautions we have that our players have followed, our coaches follow, our staff follows, you know, I think we’re a model of safety of what we’ve been doing during this time period,” Mullen said.

“So I’m really proud of how we’ve handled everything and how safe we’ve been with everything we’re doing and all the precautions we’ve had in place during this time.”

The Southeastern Conference already has postponed one game this week: Vanderbilt and Missouri was tentatively pushed to Dec. 12 because COVID-19 issues have left the Commodores without enough players. It was the first SEC game rescheduled due to coronavirus-related problems and the 28th in the Football Bowl Subdivision to be postponed or canceled since Aug. 26.