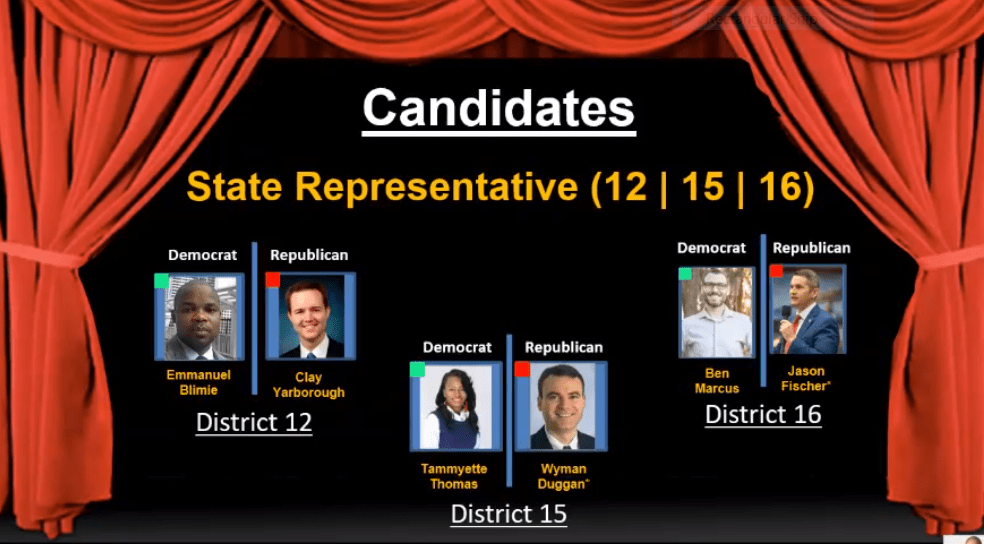 Three challengers to Republican incumbents in Florida House Districts 12, 15, and 16 made their cases to voters during a citywide forum in Jacksonville.

Each of the candidates face long odds, either in terms of resources for the stretch run or the demographic lean of their districts.

But all of them decided to shoot their shots, and on Tuesday night, they said their piece at the Collective Voice Forum.

Emmanuel Blimie, running against Rep. Clay Yarborough in House District 12 on Jacksonville’s Southside, billed himself as the “no salary candidate.”

Blimie, a native of Liberia, offered a unique personal narrative, saying that “Spongebob Squarepants was his first English teacher,” as he learned the language from the cartoon.

When asked about issues relative to the St. Johns River, one of the policy topics, Blimie said “to sit down here and say I’m going to come up with a solution isn’t going to work.” He wants to talk to experts.

When asked about charter schools, Thomas said she wants the public education system to be fully funded, noting her participation in the “Rally in Tally” in support of public schools.

Thomas said that while “teacher pay was increased” this year, the raise “left out the existing teachers.” Thomas also wants “higher pay” for support staff, including bus drivers.

Among her other priorities: police reform.

Ben Marcus, running against Jason Fischer in HD 16 on Jacksonville’s Southside, said he was “sick and tired of politicians sitting in their offices and making decisions like they know better.”

Marcus said he has “heard time and time again about people reaching out to their state Representative” and not hearing back, regarding unemployment claims specifically.

The candidates all spoke out against fees being required of reformed felons to vote.

“Once they’ve done their time, their rights should be restored,” Thomas said.

They also castigated the state’s unemployment system, which Marcus described as a “broken website” standing “between people and their $275 a week.”

“That couldn’t have been an accident,” Marcus said.

Thomas does have one advantage over the other two candidates on hand: HD 15 is actually a Democratic plurality district, whereas 12 and 16 see Republican registration advantages.