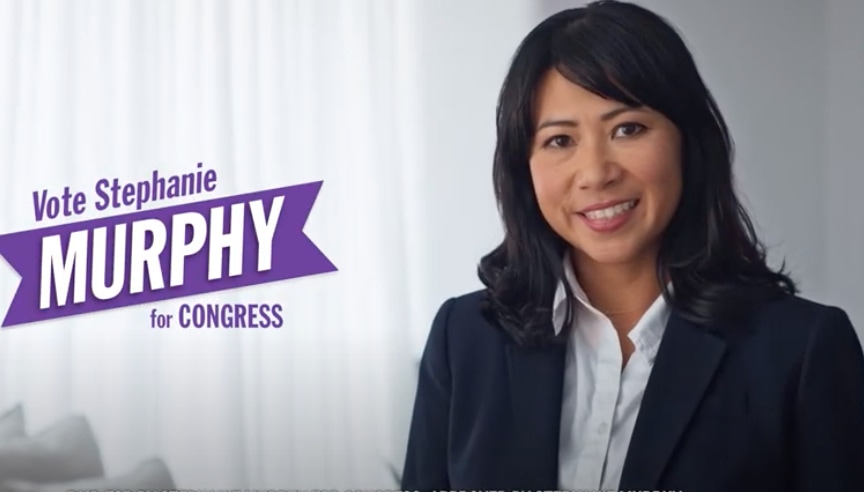 Murphy the fisherwoman baits a hook for Hispanic voters.

Democratic Rep. Stephanie Murphy is using her Spanish in a new set of TV, radio, and social media ads for her reelection campaign in Florida’s 7th Congressional District.

The set of four Spanish-language commercials entitled “Pescando” [“Fishing”] draw a portrait of Murphy as a family-first person who fights in Congress with the values her father taught. The TV ad also touches on her gun law reform efforts, one of the key policy divides between Murphy and her Republican opponent in the Nov. 3 election, Dr. Leo Valentin.

The commercials may be an initiative to counter Valentin’s appeal in the significant Puerto Rican voter population in SD 7. He is  a Puerto Rican radiologist from Orlando. CD 7 covers Seminole County and parts of northern, eastern, and central Orange County, home to tens of thousands Puerto Ricans.

Her campaign announced Tuesday it is spending six-figures to air the commercials and they will run through Election Day.

The TV commercial starts with Murphy introducing herself on camera, then turning to family snapshots, including a couple of family fishing outings. “I’m Stephanie Murphy. I grew up fishing with my dad. He taught me to work hard to get results. And I use those lessons every day,” she says in Spanish.

A narrator then takes over and connects that to one of Murphy’s legislative highlights, her success in getting the “Dickey Amendment” abolished from U.S. statutes, thereby allowing federal investment in gun violence research for the first time since the mid-1990s.

“It’s how she took on the powerful gun lobby and won, making our future more secure,” the narrator says in Spanish.

Murphy’s voice returns, in Spanish, as the images show people receiving aid during the coronavirus crisis: “In times like these, I will always put people before politics.”

The messages are a little different in the radio and social media versions, but they still start with her father and end with her pledge.

Murphy’s campaign also announced it is launching other social media videos featuring surrogates, such as Democratic U.S. Rep. Darren Soto of Kissimmee, to validate her in the Hispanic communities. Soto, who is Puerto Rican, declares, in English, “Stephanie Murphy has always been a friend of the Puerto Rican community, especially when we need her most,” and points out that she helped with his bill seeking to open the door to statehood for Puerto Rico.

“I’m incredibly proud to represent Central Florida, which is home to a large, vibrant, and proud Hispanic community,” Murphy stated in a news release about her new ads. “What’s important to my constituents is important to me. It’s why I care deeply about jobs, health care, education, and gun safety. It’s also why after Hurricanes Irma and Maria I fought to get Puerto Rico critical aid and why I support statehood for the American citizens in Puerto Rico. I’ll keep fighting to ensure every American – whether in Florida or Puerto Rico – has a fair shot at the American Dream.”

Valentin also responded to the ads.

“Unfortunately Rep. Murphy, like the Democratic Party, continues to take the Hispanic vote for granted, instead of working for the community. She continues to ignore the important issues with a trivial message that shows how disconnected she is with our community. She’s been nowhere to be seen for the past two years and once again shows up two weeks before Election Day begging for votes. In Spanish we call that “pescando votos.”