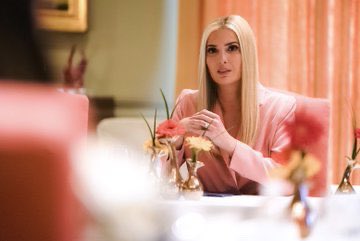 She spoke at a Fort Myers rally shortly after a Naples fundraiser.

Ivanka Trump boasted about manufacturing jobs, school choice and the push for a vaccine at a Fort Myers rally Wednesday.

President Donald Trump’s senior advisor — and daughter — said the incumbent kept more promises than he made in his first term. In a second term, he will “make America greater than ever before.”

“Washington has not changed Donald Trump; Donald Trump has changed Washington,” she said, “and he’s not done yet.”

She spoke to a crowd of supporters at a rally at Top Rocker Field, near the Southwest Florida International Airport. That came shortly after she attended a fundraiser in Naples, where invitations encouraged donations of $15,000 to $100,000. Republican National Committee chair Ronna McDaniel hosted the Naples event.

At the rally, she defended the administration’s handling of the COVID-19 pandemic. In contrast, she said Vice President Joe Biden advocated for economically devastating shutdowns.

“Endless lockdowns are not a strategy,” she said. “The Republican Party is the party for safe re-openings.”

Meanwhile, mortality rates have gone down 85% in five months, she said. She pointed out her father two weeks after announced he tested positive the coronavirus was bouncing from rally to rally with relentless energy.

Several times, the former Democrat, widely considered a moderating voice within the White House, argued for fiscally conservative principals. A focus on cutting taxes and regulations, she said, helped build the greatest economy in the nation’s history pre-pandemic.

President Trump, she said, “fixed broken trade deals and brought jobs back to America.” She attacked a number of trade agreements enacted during Biden’s years in Washington as a Senator or as Vice President, including NAFTA and TPP.

Ivanka Trump acknowledged her father’s blunt style in rallies and on Twitter.

“I recognize my father’s communication style is not to everybody’s taste, that his tweets can feel a bit unfiltered,” she said.

But that drew cheers from a crowd where Make America Great Again caps far out-numbered face masks. “See, she said, “some people love him for that.”

She said the Trump administration had done huge amounts for working families, whether in expanding child care assistance or boosting manufacturing jobs.

She also made a case for school choice providing opportunities for more families, pointing to a local woman working on a master’s degree after receiving a scholarship to attend a private Christian school.

The Trump administration “in a second term will provide vocational education to every high school in American and school choice to every parent in this county,” she promised.

In total, Ivanka painted a bright future for the nation at risk if her father does not win reelection. President Trump in a second term, she said, would stop “pointless endless wars,” keep workers employed in blue-collar jobs, protect Medicaid and Social Security and deliver more tax cuts to the American people.

nextJoe Henderson: Drop-off voting boxes could be the difference-maker in this election