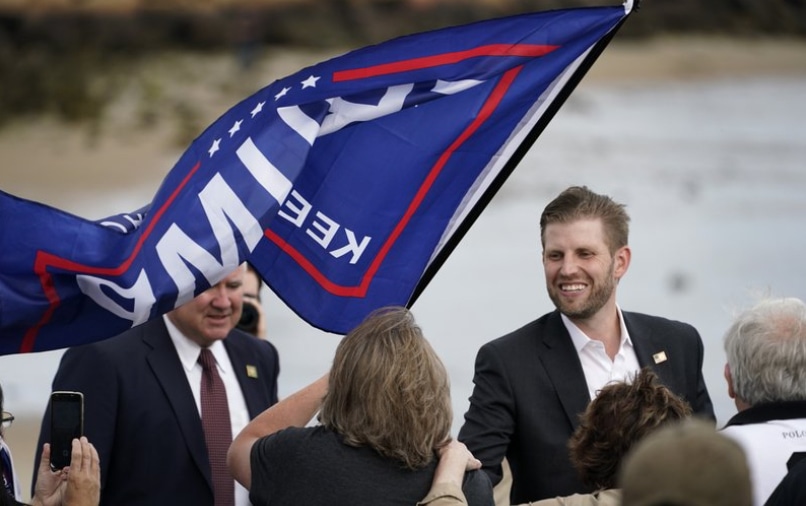 On a day of "trick or treats," the Trump campaign has a a treat for Florida supporters.

On a day of “trick or treats,” the President’s reelection campaign’s providing a treat to Florida supporters.

No trick: Eric Trump, the middle son of the 45th President of the United States, will greet Trump backers at two Florida stops on Saturday afternoon, popularly celebrated as Halloween.

Trump will make two Sunshine State stops, with the first being in Jacksonville Beach on Halloween afternoon. From there, he moves to Longwood in the Orlando area.

The Jacksonville Beach event kicks off at 1:30 p.m. at an outdoor location: the Seawalk Pavilion.

Doors open at 12:30, according to the campaign.

The Eric Trump event comes amidst other advertised event cancellations for the outdoor facility. Jax Beach Fitness Fest, Oktoberfest, and Moonlight Movies were among the festivities that didn’t happen because of virus precautions, according to the facility’s Facebook page.

The President’s son moves on to Longwood immediately after this speech, for a 5 p.m. engagement at the Norelli Family Foundation. Doors there open at 4 p.m.

While it’s impossible to know exactly what Eric Trump might address in Jacksonville or Longwood, recent events have offered the kind of GOTV exhortation one might expect.

Eric Trump was no less enthusiastic about Arizona.

““I promise you we’re going to win Arizona,” Eric Trump told the crowd in Phoenix. “The Democrats are already on our side this election. It is the radical left who is totally unrecognizable to this country.”

Expect familiar crowd-pleaser lines also from Eric, including possibly “If JFK was alive today, he would be sitting right here in the front row,” which Trump said at his Arizona stop.

The Trump campaign has been aggressive with its strategy, deploying surrogates into local markets as a way of ginning up local market television coverage to counter a more cash-flush Biden operation.

Recent polling suggests a tightening race in Florida. The Real Clear Politics polling average shows Trump over Biden by less than half a percentage point.