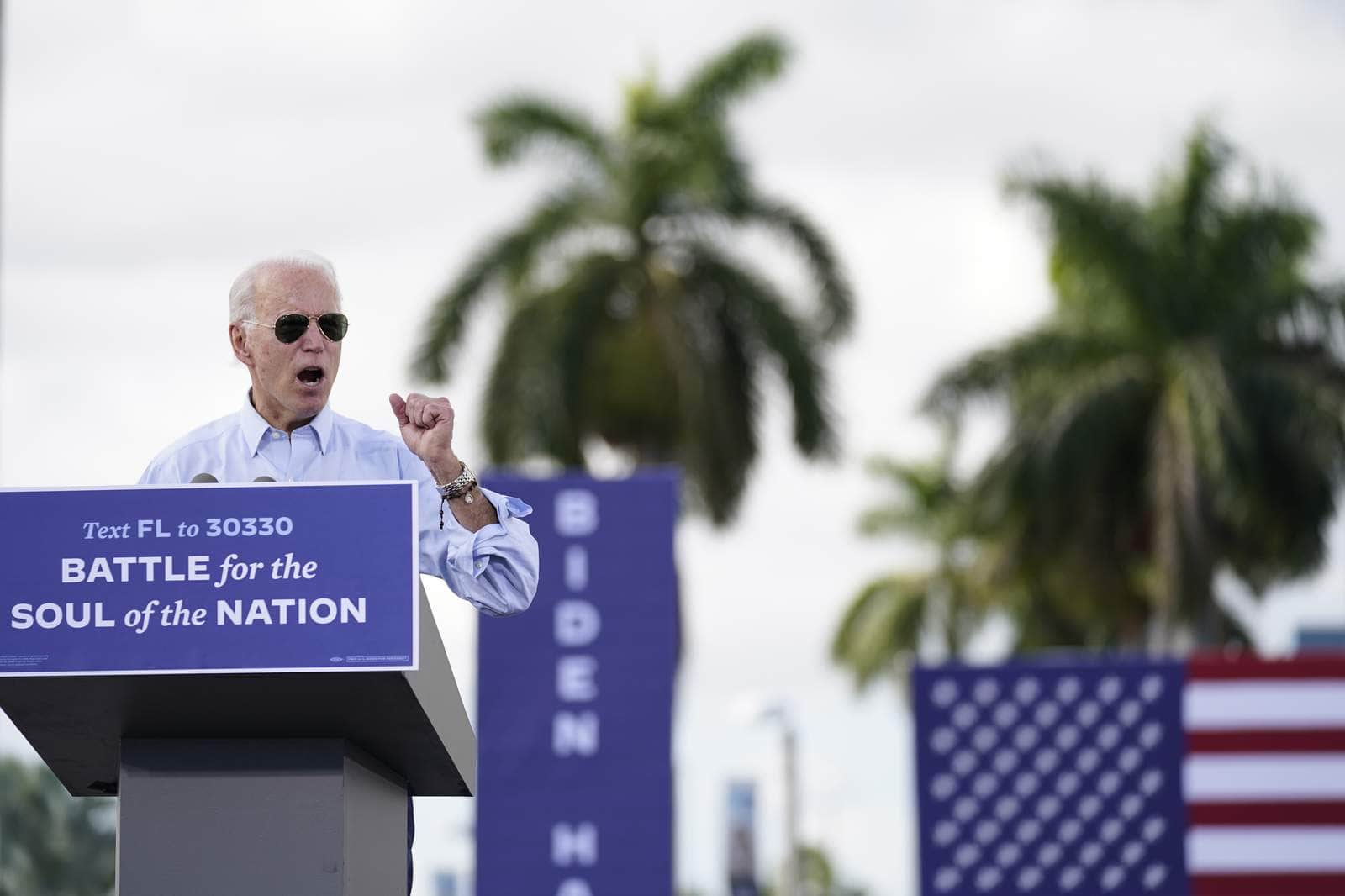 Final battlegrounds are coming into focus. Florida is still a prize.

When Joe Biden was last in Iowa, his presidential campaign was on the verge of collapse and he was soundly trounced in the caucuses by a former Indiana mayor nearly 40 years his junior. He returns Friday as the Democratic nominee, believing he’s just days away from becoming president-elect.

Biden’s trip reflects the growing confidence among Democrats in the closing days of the campaign. Iowa, which Donald Trump won by 9 points in 2016, is among the clutch of GOP-leaning states that Biden is trying to bring back into the Democratic column. He’ll also swing through Wisconsin on Friday while his running mate, Kamala Harris, courts voters in Texas, a longtime GOP bastion that Democrats insist is in play this year.

Trump, meanwhile, is playing defense in Michigan and Wisconsin, states he won four years ago. Trump and Biden will both be in Minnesota, a longtime Democratic state that the Republican president is trying to flip.

The arc of Biden’s rise is eclipsed only by that the challenges faced by Trump — whose confidence in his reelection was dealt a devastating blow by the coronavirus pandemic this spring, with the public health and economic crises still rearing their heads in the days leading up to the close of polling.

With four days until the election and more than 80 million votes already cast, time is running out for Trump and Biden to change the shape of the race. Biden is leading most national polls and has a narrow advantage in the critical battlegrounds that could decide the race.

That’s why both men zeroed in on Florida on Thursday. While Biden has a path to victory without the critical battleground state, Trump’s reelection bid would almost certainly be blocked if he loses there.

Friday marks the beginning of the critical final stretch before the election. Trump’s closing sprint to Election Day also includes three stops in Pennsylvania on Saturday and nearly a dozen events in the final 48 hours across states he carried in 2016.

After Iowa, Wisconsin and Minnesota on Friday, Biden will hit Michigan on Saturday, where he’ll hold a joint rally with former President Barack Obama.

Biden has held fewer events in a nod to the restrictions in place across the country to prevent the spread of the coronavirus. The virus has killed more than 228,000 people in the United States, and cases are surging across the country, threatening an economic recovery Trump had aimed to champion.

Trump on Thursday celebrated a new federal estimate that the economy grew at a stunning 33.1% annual rate in the July-September quarter — by far the largest quarterly gain on record — making up ground from its epic plunge in the spring, when the eruption of the coronavirus closed businesses and threw tens of millions of people out of work.

“So glad this great GDP number came out before Nov. 3,” Trump tweeted, predicting a dire reversal if Biden is elected.

But economists warned that the economy is already weakening again and facing renewed threats as confirmed viral cases surge, hiring has slowed and federal stimulus help has mostly run out.

Biden said, “The recovery is slowing if not stalling, and the recovery that is happening is helping those at the top but leaving tens of millions of working families and small businesses behind.”

Harris, a California senator, was set to campaign across Texas on Friday, aiming to chip into Republicans’ historic advantage in the diversifying and increasingly competitive state.

Trump is banking on local news coverage of his rallies to overcome a substantial advertising deficit stemming from a late cash crunch. Biden and his allies are outspending Trump and his backers by a more than 3-1 ratio in Florida — about $23 million to about $7 million — in the final push to Election Day, according to data from ad tracking firm Kantar/CMAG.

Biden, meanwhile, is pouring tens of millions of dollars into a torrent of online advertising that will deliver his closing message of the presidential campaign, highlighting his promise to govern for all Americans while blasting Trump’s handling of the coronavirus pandemic.

“I will work as hard for those who don’t support me as those who do,” Biden says in one of the digital ads, which took over the masthead of YouTube Thursday. “That’s the job of a president — the duty to care for everyone.”

How much exactly Biden will spend is unclear. His campaign says it is putting a “mid-eight-figure” dollar amount behind over 100 different ads, which means they could be spending as little as $25 million — but potentially much more.

The Republican National Committee, meanwhile, launched its closing message to voters Thursday, not mentioning Trump, in an apparent aim to help GOP candidates up and down the ballot with a focus on traditional Republican messages around lowering taxes and health care.

The aftereffects of Hurricane Zeta were holding back voters at a number of polling places in northern Florida and northern Georgia that lost power. In Douglas County, in Atlanta’s western suburbs, all six polling locations were without power, as were county offices.