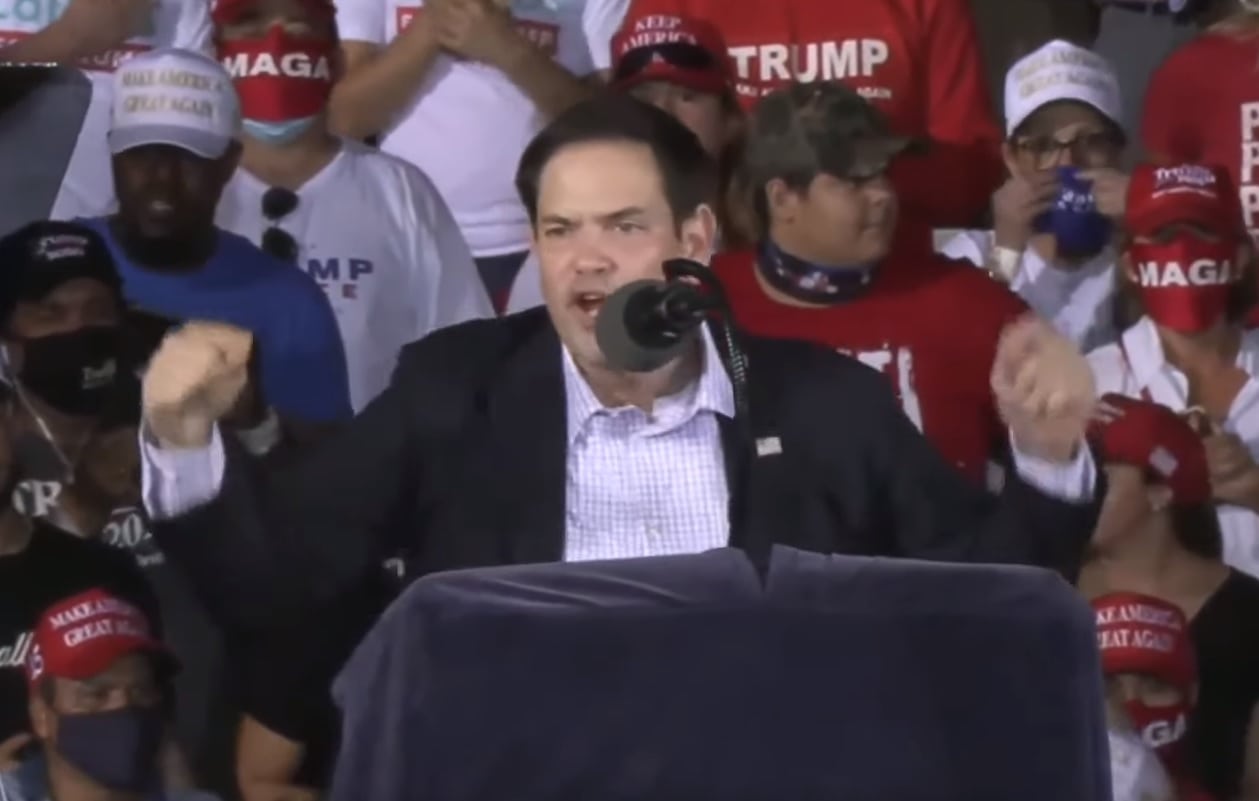 The FBI is investigating the road rage incident on Interstate 35.

Ahead of President Donald Trump‘s appearance Sunday night in Miami, U.S. Sen. Marco Rubio praised a group of Trump supporters that surrounded a Joe Biden campaign bus while it was traveling on a Texas interstate en route to Austin.

The FBI is investigating the Friday incident, caught on video, after Biden campaign officials described the “Trump Train” as trying to slow down the campaign bus and drive it off the road. The President had defended the actions of those supporters, who drove pickup trucks bearing Trump and American flags.

“We love what they did, but here’s the thing they don’t know,” Rubio said. “We do that in Florida every day.”

On Saturday, Trump tweeted a 26-second video clip of the incident, writing, “I LOVE TEXAS!” After the FBI confirmed Sunday that it was investigating the event, the President came out in support of the “Trump Train.”

“In my opinion, these patriots did nothing wrong,” he wrote. “Instead, the FBI & Justice should be investigating the terrorists, anarchists, and agitators of ANTIFA, who run around burning down our Democrat run cities and hurting our people!”

Texas Republican Party Chair Allen West, a former South Florida Congressman, dismissed a Texas Tribune reporter’s question about the incident, instead pointing to assault, robbery and looting committed by Antifa and Black Lives Matter protesters as real violence. He named the deaths of three Trump supporters in Portland, Denver and Milwaukee and threats against a St. Louis couple, who were ultimately charged last month for pointing guns at protesters.

“Where is the liberal corporate media’s concern about that real violence?” he asked, calling concerns about the Interstate 35 incident “more fake news and propaganda.”

“It was ridiculous last night that Marco Rubio basically endorsed what they did in Texas on the road,” he said. “I had a guy try to run me off the road on 75 a couple days ago. It’s awful.”

“No, @MarcoRubio. In Florida we do not run our political opponents off the road, threatening their lives and the lives of innocent motorists,” she tweeted.

Rubio’s office did not immediately respond to a request for comment.

At the rally, the Senator railed against socialism, noting the diverse crowd of Cubans, Venezuelans, Nicaraguans, Dominicans, Colombians and, ultimately, Americans. Many of the rally-goers or their families had seen socialism face-to-face before fleeing to the United States, he noted, adding that voters have a clear choice on Tuesday.

“That is the point,” Rubio said, interrupted by USA chants. “This President has united tonight in one place at one time people from all over the world united by one thing: they are proud Americans.”

At the mention of Biden, who the Senator joked was already asleep at 10:30 p.m., the crowd erupted into “Sleepy Joe” chants.

“Don’t wake him up,” he repeated, shushing supporters.

“The Biden plan when he was Vice President, ‘We’re going to bring a group of people together and our allies and we’re going to round up the world and we’re going to do a deal with Iran,'” Rubio said in a mocking tone. “You know what the Trump plan for (Qassem) Soleimani was? He’s dead.”