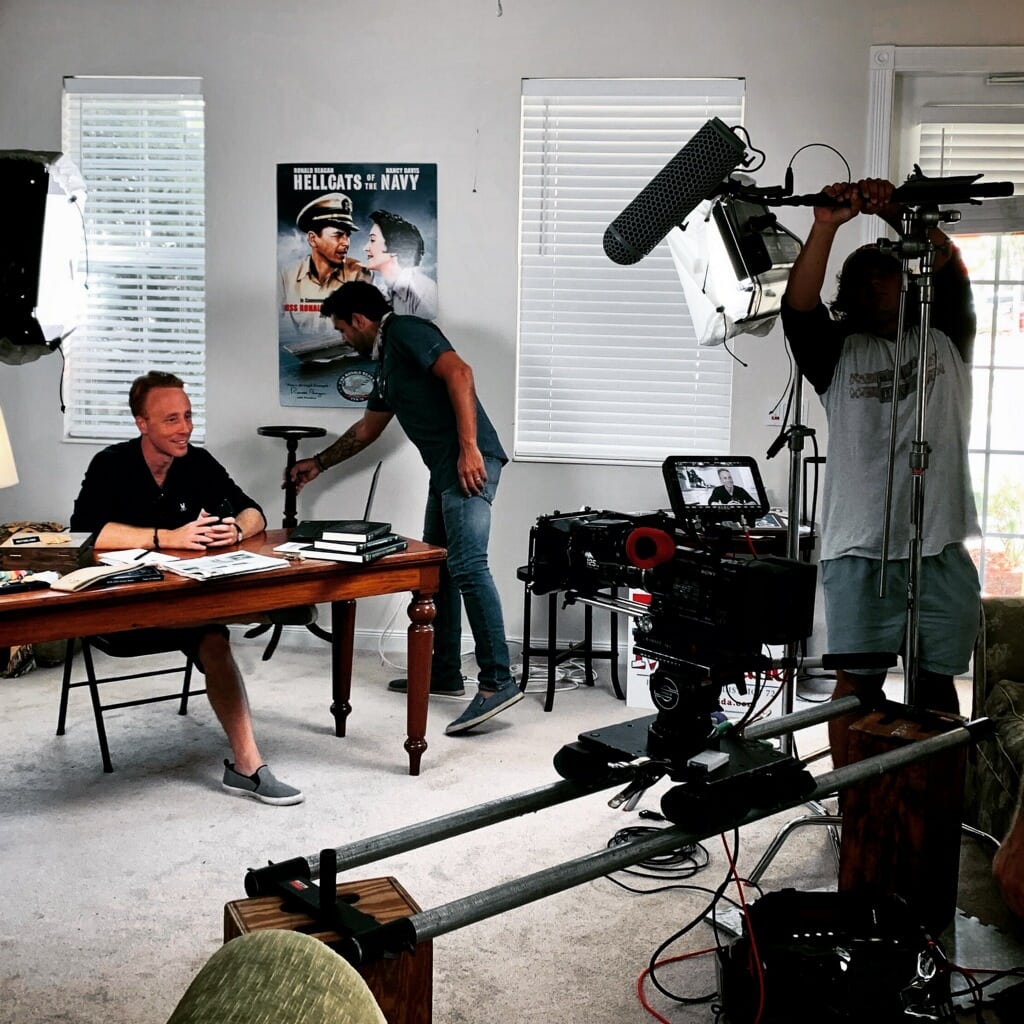 He managed Vern Buchanan's campaign and advised Fiona McFarland to victory. Now what?

Ask Max Goodman about Tuesday’s election results and he immediately begins talking up his clients.

He managed Rep. Vern Buchanan’s successful reelection campaign, but credited a larger-than-expected margin of victory to the Congressman’s record. Fiona McFarland  flipped a House seat red weeks after polls showed her losing, but said that was only because of the candidate’s personal sweat equity.

“It was a thrilling night,” Goodman said of the Tuesday results. “But like any good coach would say, it’s about the team and the players.”

Still, Southwest Florida’s political class took notice of Goodman’s victories. Veterans of the political process from both sides of the aisle credited Goodman for bringing creativity and flair — and maybe a little tension — to the season.

This election season served as a debut of sorts for The Max Goodman Agency, launched in 2019, and it proved to be a successful premier. Of course, that’s largely thanks to years of work Goodman put in before, relationships he’s built and political trends in the Sarasota-Tampa area he’s carefully scrutinized. Goodman himself sharpened his political teeth working for Buchanan’s first campaign, and 15 years later revels in the success of an eighth consecutive successful campaign for the Sarasota Republican.

Some of the success has been luck, of course, in friendships, in timing. A family member makes a rather solid case that electioneering know-how just may simply be part of his bloodline.

“I’d like to say it’s in his DNA,” said Adam Goodman, Max’s older brother and a successful consultant in his own right.

Adam Goodman, 30 years the elder, came to Florida in the 1990s, before the great shift away from southern Democrat control. Working in Ander Crenshaw and Jeb Bush’s Republican Party, he played a role in flipping the Florida Senate to Republican control, which remained in place since.

While his brother helped open doors for Max Goodman, the true gift behind the Sarasota consultant’s ability to make ads alternatively heartstring-tugging and scandal-stoking may come from further up the family tree.

Bob Goodman, father to both Florida-tied consultants, revolutionized political advertising starting in the 1960s. He signed on to help Spiro Agnew’s longshot campaign for Governor of New York and turned the race around with a jingle that turned a hard-to-pronounce moniker into a household name. Years later, he worked with George H.W. Bush’s first Presidential campaign.

“He was one of the original Mad Men of the political industry,” Adam Goodman recalls.

Max Goodman grew up watching his father work with clients from his Baltimore home. It sparked intrigue in the process. But he also learned from his father the importance of winning the voters’ hearts through the power of story.

“My dad was, in his time, the best in the business,” Max Goodman says. ”I will never reach the level he reached. He’s in the Hall of Fame for political consultants. My dad focused on the art of media.

“He showed me it’s all about the heart and the feel. If you can capture those two things, you have got a good shot to win your race. It’s all about feeling emotion in this game.”

With the Buchanan campaign this year, Goodman pushed on digital platforms a video lasting nearly four minutes focusing on 22 legislative accomplishments during the incumbent’s time in Washington. It served as a foundational message that couldn’t be bound to a 30-second TV spot. Goodman’s agency won an international award last year for a similar mini-documentary showing Sen. Joe Gruters explaining his views on immigration during a trip to the border wall. Neither featured a hummable song, but both moved politicians from voices talking through a screen to the role of living people.

“He’s excellent at what he does,” said Joe Gruters, chairman of the Republican Party of Florida. “I can’t say enough good things about him.”

Goodman, in college, worked briefly in broadcasting doing sports play-by-plays for Franklin and Marshall College games. He said the video editing game always proved exciting to him. He credit videographer J.P. Manterola with success with many of his most lauded clips.

But Goodman doesn’t just make touching advertisements, and he doesn’t exclusively form narratives in broadcast spots. He’s also earned a reputation in local politics for the kind of opposition research that generates both headlines and headaches.

“He’s masterful at creating chaos for opponents internally and throwing them off of their game,” Gruters said.

Margaret Good, Buchanan’s Democratic opponent this year, spent most of a vital business day months from the election developing a response to news she cast the only vote in the Florida Legislature against a childlike sex doll ban. Good said she had changed a vote in error. Nobody noticed the vote for well after a year, after the vote could no longer be changed.

Two years ago, Buchanan’s campaign ran ads dissecting Democrat David Shapiro’s stock portfolio, and remarks on his son’s Facebook page became an issue in the area’s Black community newspaper. In a primary this year between McFarland and Donna Barcomb, ads dredged up votes by Barcomb on property taxes and a controversial charter proposal tied to a right-wing extremist group.

The issues all popped up during critical times when campaigns need to be organizing and deploying volunteers in the field and voters to the polls. Goodman wouldn’t speak to any particular issue that arose or claim any credit for the opposition popping up when it did. But it certainly seemed to form a narrative.

“You always want to play offense,” he said, “and to always keep your opposition on defense.”

Goodman first ended up involved in area politics through Buchanan. His brother had worked with the Sarasota businessman, a force in Chamber of Commerce and Republican politics well before he ran for office, and he was considering some type of run for office. When Rep. Katherine Harris decided to retire from the House, Buchanan staffed up, and ended up hiring Max Goodman as his first political hire.

It turned out to be an extraordinarily challenging campaign. Buchanan in 2006 faced a Democratic wave that made Sarasota suddenly competitive. He ended up winning his first run for office by 369 votes in a controversial win that thrust the race into the national spotlight as Democrat Christine Jennings challenged results and even attended House orientation.

Gruters also served as a field director on that campaign, as did Christian Ziegler, now a County Commissioner and vice chair of the state party.

At a Republican fundraiser last year, Buchanan spoke with praise about his first political hire, who served as campaign manager for multiple reelection campaigns for the Republican. It turned into a fruitful relationship for both, and Goodman has worked various stints in Buchanan’s House and campaign operations through the years.

A mix of working alongside some future political leaders and joining Buchanan at the start of a now lengthy stay in Washington was incredibly fortunate and Goodman developed strong relationships. He also ended up working on a Senate campaign for Tampa Republican David Jolly, and managed his final House campaign in 2016 against Charlie Crist.

He’s managed to keep things friendly and civil with folks along the way. Lou Grossman, a Democratic communications professional in Sarasota, spoke well of the Republican professional.

“Max is very good at what he does,” Grossman said. “He has a killer instinct, which seems to be the standard operating procedure of the Republican Party. He speaks more to media than I would, but I respect Max. He does what he’s supposed to do and he’s very good at it.”

Other Democratic consultants in the region and in Washington who have faced Goodman in direct opposition offered similar praise, though few felt comfortable going on record. At the same time, he’s had rigorous and aggressive battles before.

What drives Goodman, he said, is providing a conduit for candidates he believes in to get their message heard.

“I love being, for lack of a better word, a storyteller for candidates with an incredible story to tell,” he said. “The ability to tell a story in terms that people relate to, that is something we strive for. People want authenticity. They want to believe. They want to feel. And too often in this profession, people don’t bring any emotion.”

Regardless of Goodman heaping credit for McFarland’s win on her work ethic, McFarland herself said Goodman ironically undersells himself. She connected with Goodman, again through an odd connection to Adam Goodman, who worked on her mother K.T. McFarland’s 2006 Senate campaign in New York. When McFarland moved to Sarasota and looked for someone who could discuss a path to public service, those connections led her to Goodman.

From there, she learned the fundamentals of campaigning: GOTV, messaging, door-to-door canvassing.

“He is an artist of politics, really,” McFarland said. “It’s in his family’s blood, but Max also just gets so excited over something as simple as creative copy for a commercial, or just talking points or branding and imaging. He’s brilliant. When it comes to candidate handling, he’s the one who really taught me how to be a candidate, but without changing who I was.”

In the immediate future, Goodman said he’s mostly looking forward to a short time ahead without politics. But he will surely be working on the next campaign in short order. He;s always been drawn to the trail, and particularly to competitive races, the ones where good messaging can make the difference in a winning or losing campaign.

“What else am I supposed to be doing,” he said with a laugh. “I sometimes have difficulties separating myself from the campaigns I am working on, but you put a year plus into this and you want to make it count. You can take things personally sometimes, but then the grind is what makes it so sweet.”

previousFaced with an onslaught of outside cash, Vance Aloupis outshines 2018 success

nextAttorney John Morgan: 'Nikki Fried has disqualified herself from any future or statewide office'