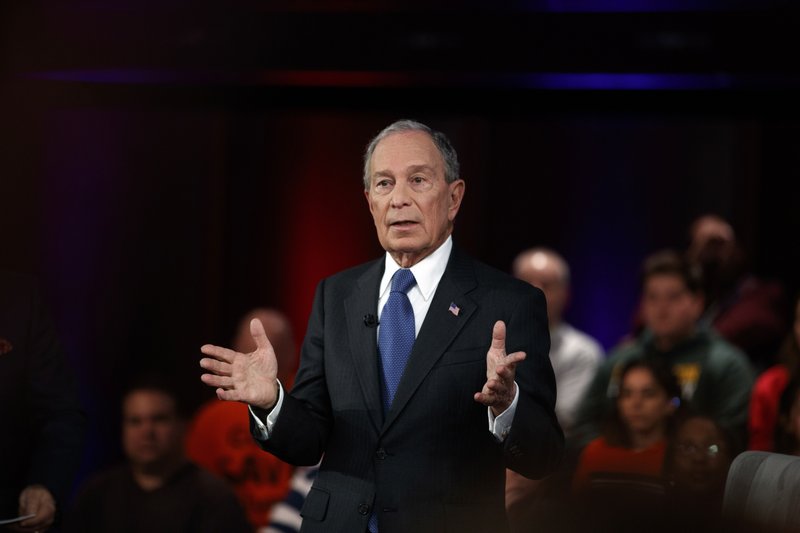 After pouring more than $1.2 billion of his personal fortune into presidential politics this election, former New York Mayor Mike Bloomberg has little to show for it.

His only win during a short-lived Democratic bid for the White House was in the territory of American Samoa. And after pledging to spend “whatever it takes” to defeat President Donald Trump, he routed $110 million to Florida, Ohio and Texas — all states that President-elect Joe Biden lost.

Bloomberg, who built a media and financial services empire before turning to electoral politics, has long used his $55 billion in estimated wealth to play kingmaker, with no shortage of candidates and causes seeking favor.

Yet after dumping $1.1 billion into his campaign, he waited until September to follow through on his vow to spend big to unseat Trump. His investment was especially disappointing in Florida, a battleground state that is normally decided by razor-thin margins but that Trump won this year by 3.4 percentage points.

The showing could raise questions about Bloomberg’s ability to use his vast financial resources to sway politics in the future. Some Democrats are now questioning the mystique that has long shrouded Bloomberg’s political operation, which promotes itself as shrewd, dispassionate and data-driven when making decisions about how to invest in campaigns.

“He made a lot of noise about putting $100 million into Florida. We didn’t see any of that money until six weeks out,” said Alex Sink, the 2010 Democratic nominee for Florida governor who endorsed Bloomberg’s presidential bid. “Yes, he spent a lot. But it goes back to how and when we talk to our voters. It was too late, and the airwaves were already saturated.”

The 2020 campaign proved that money does not always translate into votes. Fundraising powerhouses like Democratic Senate candidate Jaime Harrison in South Carolina were soundly defeated.

Bloomberg advisers say it’s unfair to blame him for not doing enough to help Biden in Florida. They note that no one else donated anywhere near as much as he did, which paid for voter mobilization programs and advertising. And Bloomberg wasn’t the only Democrat or group committing resources to the state, though he did receive an outsize share of the publicity.

“It would be hard to take anyone with a straight face who says Mike Bloomberg didn’t do enough in Florida, if that is seriously the contention,” said Kevin Sheekey, one of Bloomberg’s top political advisers. “Florida was always a state that we viewed as difficult for a Democrat to win against Donald Trump.”

Republicans and Democrats alike say that Biden’s poor performance among Latinos in three Democratic counties in South Florida contributed to his loss in the state. For months, Republicans ran blistering attacks against Biden and other Democrats, accusing them of embracing socialism. They appear to have resonated with the area’s sizable population of Cuban and Venezuelan voters.

“You saw Democratic groups try to sound the alarm,” said Cam Savage, a Republican strategist and adviser to Miami-Dade County Mayor Carlos Giménez, who ousted Democratic Rep. Debbie Mucarsel-Powell in the Nov. 3 election. “When you’re at a cocktail party in New York or Washington, D.C., and people have a conversation about what socialism means, it’s hard for them to understand that that actually means something different in South Florida because these people have lived through it.”

Bloomberg’s super political action committee, Independence USA, also spent just over $6 million in Texas and a little more than $4 million in Ohio on ads supporting Biden in the week before the election, according to data from the ad tracking firm Kantar/CMAG. Biden lost Ohio by more than 8 percentage points; Trump won Texas by nearly 6 percentage points.

Bloomberg has had more success in previous election cycles.

In 2018, he was praised for donating tens of millions of dollars to help Democrats retake the House. And his philanthropic giving to causes including gun control and fighting climate change earned him goodwill.

This year, one of the groups he founded and funds, Everytown for Gun Safety, committed to spending $60 million on elections, and Bloomberg also gave another $60 million to support Democrats in House races, as well as $11.4 million to House Majority PAC, the major Democratic super PAC helping elect Democrats to the House.

Democrats lost seats in the House on Election Day and failed to flip statehouse chambers they had targeted.

Still, Bloomberg has sometimes been a source of controversy in the party.

Initially a Democrat, he became a Republican in 2000 before his first run for New York City mayor. He left the GOP in 2007 and wasn’t affiliated with either party until registering as a Democrat again last year.

To many progressives, his wealth and years on Wall Street make him an embodiment of the corporate strain of Democrat that has limited their policy ambitions. During his bid for the White House, he was repeatedly attacked by rivals such as Sens. Bernie Sanders of Vermont and Elizabeth Warren of Massachusetts for trying to “buy” the race.

Some of the rancor also stems from his exit from the race, when he laid off campaign staffers he’d promised to employ through November.

And after he initially transferred $18 million in leftover campaign funds to the Democratic National Committee, many party leaders and donors started to question whether he’d renege on his pledge to spend big defeating Trump as the months ticked down.

“Before the Democratic establishment tries to blame the left for what happened on Election Day, they should have a talk with Michael Bloomberg,” said Rebecca Katz, a progressive strategist and former aide to former Senate Majority Leader Harry Reid. “After vowing to spend ‘whatever it takes,’ he disappeared for most of the election.”

Sheekey, the Bloomberg adviser, said critics of his Florida effort aren’t seeing the big picture. He said Bloomberg’s investment freed up Democratic groups to spend elsewhere while forcing Trump’s cash-strapped campaign to spend even more in Florida, which detracted from their spending in Great Lake state battlegrounds Biden won.

“At the end of the day, a win is a win and Joe Biden will take office in January and Donald Trump will leave,” Sheekey said. “We feel quite good about the decision we made, the reasons that we made it and the end result.”