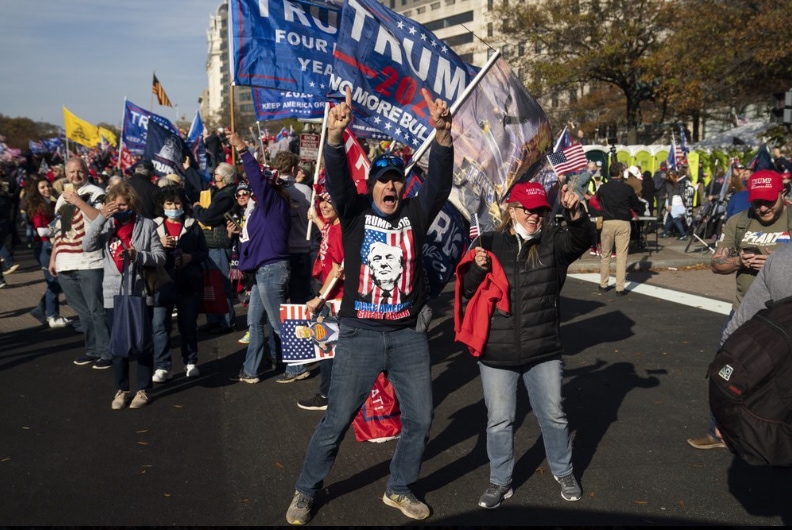 Predictit is a trading market where users can essentially buy stock in election outcomes. The concept is similar to the stock market in that the idea is to buy low and sell high.

But at this point in the process, users are still buying shares in presidential outcomes that have already been determined.

This is not a thought experiment. Actual money is involved and people are so wrapped up in Trump’s baseless claims that he won the election they are actually throwing money away on a prediction market to further broadly rejected conspiracy theories about the election.

Let’s just take a look at the numbers.

Will a woman be elected U.S. Vice President this year? That’s only trading at 87%, meaning the market has Sen. Kamala Harris with just about a 13% of not becoming the next Vice President. The ticket she shares with Biden, again, has already been called for the Democrats.

In case it’s not already clear how ridiculous this is, imagine knowing the score of a football game in which the winning team prevailed by five touchdowns, but betting on the losing team because maybe they can still kick a field goal. No one, literally no one, would do that because it would be akin to taking a wad of cash and setting it on fire.

But the craziness doesn’t stop there.

Drilling further down into state-by-state prediction markets, Nevada still shows 11-cent shares for Trump winning the state. Nevada has already been called for Biden where he leads by 33,596 votes.

In the combo market including Michigan, Wisconsin and Nevada, trading is at 16 cents for Trump winning any of the three. Biden has won all three by 157,772 votes in Michigan, 20,565 in Wisconsin and, again, 33,596 in Nevada.

Shares are trading at 13 cents for Trump winning any state he lost in 2016. He hasn’t flipped a single seat.

To the MAGA universe, you are being played. In some cases, the markets have reached the maximum amount of traders because smart people, nay, people with any shred of cognitive ability, are feasting on Trump’s ill-advised army of supporters willing to torch their money just to fall in line.

But this — THIS — is a pretty glaring example of just what is happening in the United States of America right now. There is no evidence to suggest there was any meaningful voter fraud that could tip the scales on this year’s election outcome. Yet this is what has and continues to happen with Trump and his band of red-capped lackeys. The President says something and they believe him, facts be damned.

It doesn’t help that some of the most ardent believers in Trump’s lost cause are Republican officials. Some only mildly entertain the idea, saying he has the right to challenge the results, but some  — such as our Governor — are floating the idea of faithless electors deciding the election for Trump.

But hey, it’s the economy, stupid.