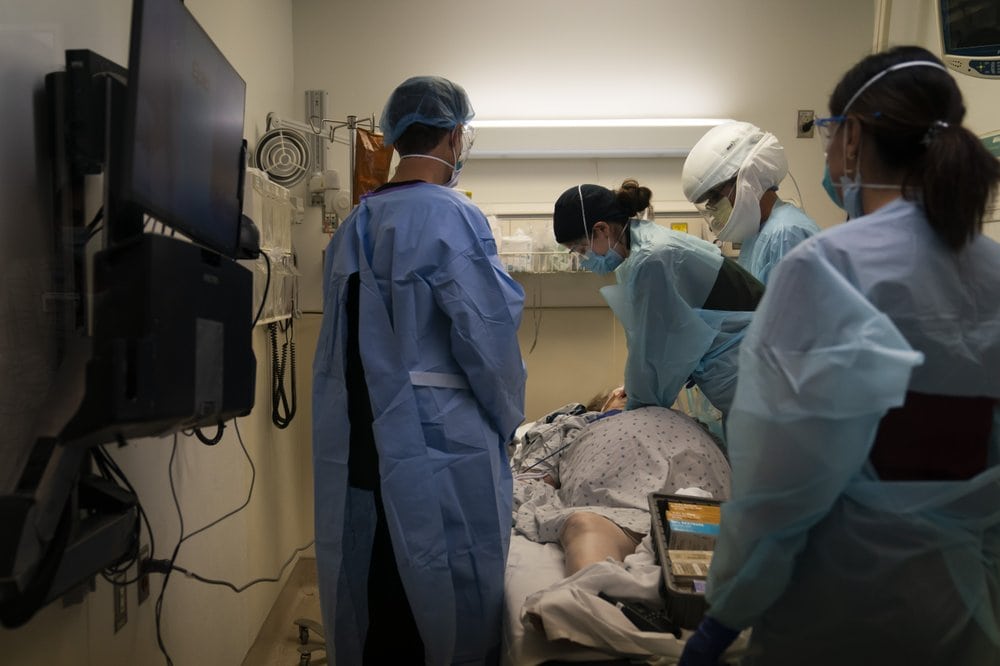 The surging coronavirus is taking an increasingly dire toll across the U.S. just as a vaccine appears at hand, with the country now averaging over 1,300 COVID-19 deaths per day — the highest since the calamitous spring in and around New York City.

The overall death toll has reached about 253,000, by far the highest in the world. Total confirmed infections have eclipsed more than 11.7 million, after the biggest one-day gain on record Thursday — almost 188,000. And the number of people in the hospital with COVID-19 hit another all-time high at more than 80,000.

With health experts deeply afraid Thanksgiving travel and holiday gatherings next week will fuel the spread of the virus, many states and cities are imposing near-lockdowns or other restrictions. California ordered a 10 p.m.-to 5-a.m. curfew starting Saturday, covering 94% of the state’s 40 million residents.

The Texas border county of El Paso, where more than 300 people have died from COVID-19 since October, is advertising jobs for morgue workers capable of lifting bodies weighing 175 pounds or more. Officials are offering more than $27 an hour for work described as not only physically arduous but “emotionally taxing as well.”

The county had already begun paying jail inmates $2 an hour to help move corpses and has ordered at least 10 refrigerated trucks as morgues run out of room.

COVID-19 deaths in the U.S. are at their highest level since late May, when the Northeast was emerging from the first wave of the crisis. They peaked at about 2,200 a day in late April, when New York City was the epicenter and bodies were being loaded onto refrigerated trucks by forklift.

Amid the bleak new statistics, Pfizer said Friday it is asking U.S. regulators to allow emergency use of its COVID-19 vaccine, setting in motion a process that could make the first, limited shots available as early as next month, with health care workers and other high-risk groups likely to get priority.

But it could take months before the vaccine becomes widely available. Pfizer has said the vaccine appears 95% effective at preventing the disease.

In Texas, Republican Gov. Greg Abbott has ruled out another shutdown and singled out El Paso county leaders for not enforcing restrictions already in place. The state’s attorney general, Ken Paxton, likened the county’s chief administrator to a “tyrant” after Paxton won an appeals court ruling blocking local leaders from shutting down gyms and other nonessential businesses.

Ohio Gov. Mike DeWine, also a Republican, failed to persuade leaders of the GOP-controlled legislature to reject a bill that would limit his administration’s power to deal with the crisis.

At issue is a Senate bill that would ban the state health department from issuing mandatory quarantine orders enforced against people who are not sick or exposed to disease — such as the order announced by the governor Tuesday setting a 10 p.m. curfew.

DeWine said he will veto the bill when it reaches his desk; Republicans in both the House and Senate have enough votes to override the veto if they choose.

“This bill is a disaster,” DeWine said Thursday. “This is not a bill that can become law.”

In California, the curfew will be in place in 41 of 58 counties. Its impact will depend heavily on voluntary compliance. Sheriffs of some counties said they won’t enforce it. Under the rules, people who are not on essential errands must stay home after 10 p.m.

The curfew is less strict than the near-total ban on nonessential business and travel that Gov. Gavin Newsom imposed in March and which he credited with flattening the rate of COVID-19 cases.

In New Mexico, Gov. Michelle Lujan Grisham is calling a special legislative session next week in the hope of providing new relief to the unemployed and small businesses reeling from the pandemic. The proposed $300 million package includes a weekly $300 supplement for the unemployed.

In Massachusetts, the state agency that operates Boston’s Logan Airport said it must cut about 25% of its workforce amid a $400 million budget deficit brought on by a steep drop in travel during the pandemic.

Massachusetts Port Authority CEO Lisa Wieland said the savings will come from a combination of layoffs, buyouts and furloughs. Logan had 42 million passengers last year. Massport said that this year, the “optimistic” forecast is 22 million and the worst case 13 million.