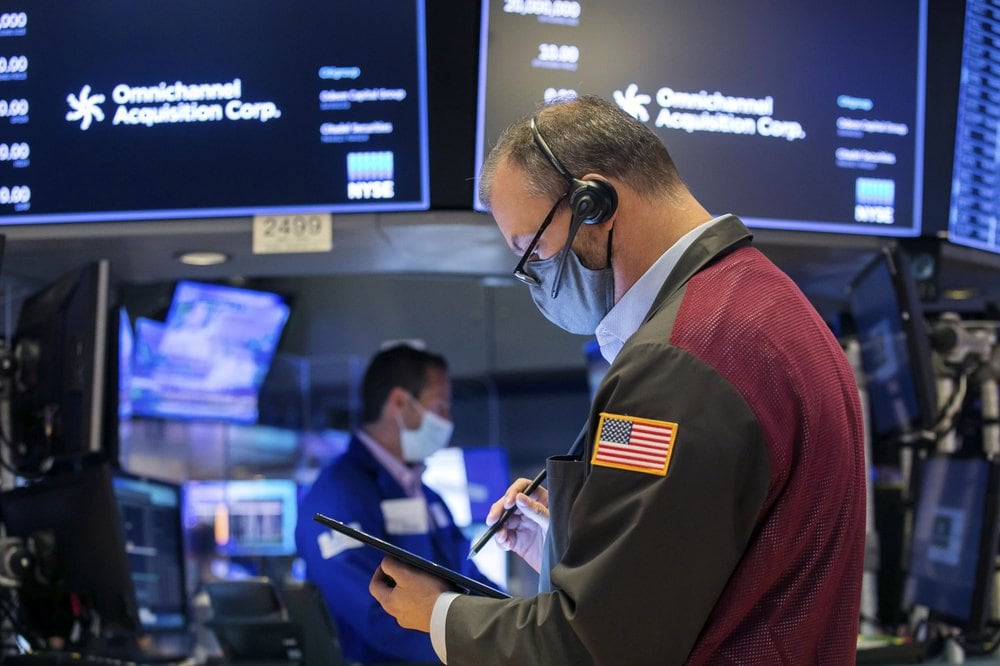 Though a vaccine may arrive in the coming months, cases and deaths are currently ballooning.

U.S. stocks are broadly lower in afternoon trading Friday as worries about the worsening pandemic undercut growing optimism about a coming coronavirus vaccine.

Technology, financial and industrial companies drove much of the selling, which accelerated in the final hour of regular trading. The S&P 500 is on track for a 0.7% decline this week, on the heels of a 7.3% weekly surge followed by a 2.2% climb.

Wall Street has suddenly begun to teeter-totter this week after a big November rally swept both the S&P 500 and Dow to record highs. Evidence is piling up for investors both for hope about the economy’s prospects next year and for fear about the damage accruing in the shorter term.

Adding to the optimistic side of the ledger Friday was Pfizer and BioNTech saying they’ll submit an application with U.S. regulators for emergency use of their vaccine candidate. Data suggests it may be 95% effective at preventing mild to severe COVID-19 disease.

If approved, a limited number of doses could begin being administered as early as next month, though widescale vaccinations likely wouldn’t happen until after a potentially brutal winter. Other vaccines are also under development, and the hope is that one or more could get the economy running closer to normal next year.

On the pessimistic side, more governments around the world are bringing back restrictions on daily life to slow the spread of the virus. Surging coronavirus counts and hospitalizations also threaten to frighten consumers enough to keep them hunkered at home and drag on the economy.

“The market is supposed to be forward-looking, but the reality is it’s hard to look past what’s been going on the past couple of weeks,” said J.J. Kinahan, chief strategist with TD Ameritrade. “The other thing that’s a major concern is people going into lockdowns in major parts of the country. What is that going to be for businesses?”

California’s Governor announced late Thursday an overnight curfew on most residents in the state, the Centers for Disease Control and Prevention is asking Americans not to travel for Thanksgiving and authorities from Lisbon to Sri Lanka announced varying degrees of restrictions.

“On the road to the other side of the pandemic are detours and we’re in one of those detours,” Krosby said.

The U.S. Treasury Department also said late Thursday that it will not extend several emergency loan programs set up with the Federal Reserve during the worst of the spring’s turmoil to help prop up markets and the economy.

The announcement got some immediate pushback from the Fed, which has been keeping the accelerator floored on its support for the economy while asking politicians in the White House and Congress to do the same. The central bank said it “would prefer that the full suite of emergency facilities” created during the pandemic remain.

But Treasury Secretary Steven Mnuchin said closing the emergency loan programs could allow Congress to re-appropriate $455 billion to other relief programs. Democrats and Republicans in Washington have been deadlocked in efforts to deliver another round of financial support for the economy following the expiration of supplemental benefits for laid-off workers and other stimulus approved during the spring.

The majority of stocks in the S&P 500 were falling, with financial companies dropping more than the rest of the market. Banks have often moved with expectations for the economy’s strength, as healthier trends would mean more people paying back loans at potentially higher interest rates. Regions Financial fell 2.6%.

On the winning side was Williams-Sonoma, which rose 5% after reporting stronger profit and revenue for the latest quarter than analysts expected.