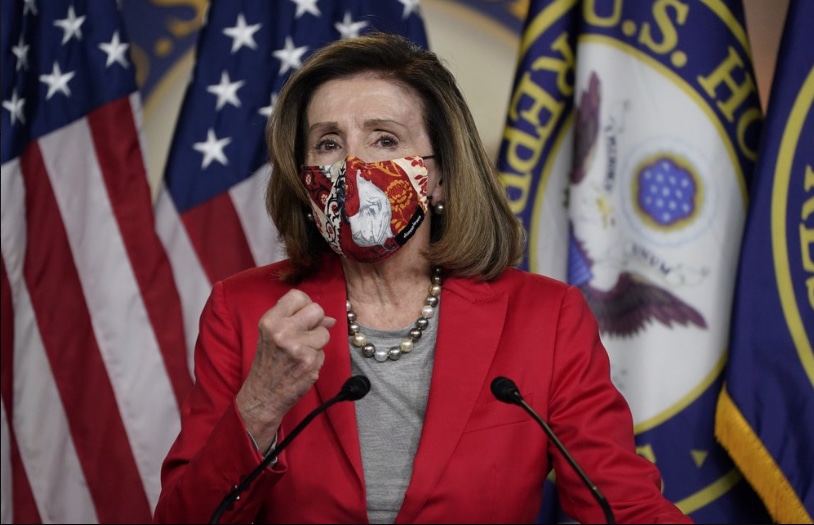 “Yeah, I do,” Pelosi said about having votes wrapped up.

There’s little doubt that Nancy Pelosi will be reelected House Speaker when the new Congress convenes Sunday. It could take a high-wire act for her to get there, largely thanks to the pandemic.

The only woman in history to serve as speaker, the California Democrat has a reputation as a formidable vote-counter and wily deal-cutter. Those skills have helped her fend off threats and cement her as leader of her party in the House since 2003, and seem likely to carry the day on Jan. 3, when the Constitution requires the new Congress to begin.

“Yeah, I do,” Pelosi told a reporter this week when asked if she had the votes wrapped up.

In what seemed an indication of confidence, Pelosi told reporters Wednesday that Rep.-elect Mariannette Miller-Meeks, an Iowa Republican, will be sworn in, even as Democratic opponent Rita Hart’s challenge to the election results remains under review by the House. Miller-Meeks is certain to vote against Pelosi to be speaker.

Even so, the terrain Pelosi faces will allow almost no margin for error.

The full House elects the speaker, and Democrats will have the chamber’s smallest majority in 20 years in a vote in which Republicans are certain to vote unanimously against her, joined by Democratic defectors. Democrats will have a 222-211 edge, with one race still undecided and one vacancy after Rep.-elect Luke Letlow, a Louisiana Republican, died Tuesday after battling COVID-19.

The raging coronavirus pandemic, combined with routine illnesses and the usual risks of wintertime travel, could make attendance unpredictable for the first House roll call in months that lawmakers will have to attend in person.

To avoid risks of exposure to COVID-19, the House altered its rules this year to let its members vote by proxy from their homes, but that change dies with the old Congress.

“I’m fine,” Pelosi said when asked if COVID-19 absences were a concern.

The speaker’s election, in which members traditionally vote verbally in alphabetical order, has long been the first vote taken by the new House. Because of COVID-19 concerns, lawmakers will be voting in groups in a roll call expected to last three to four hours.

“It’s extraordinarily tricky” for Pelosi, said Rep. Tom Cole, an Oklahoma Republican and an 18-year congressional veteran. Still, he said, he expects her to prevail “because I don’t see what the alternative is” for Democrats.

To make sure they’re at full strength, both parties’ leaders are urging lawmakers to take health precautions and return to Washington well ahead of Sunday to avoid travel snags.

“I still have people come up to me who say, ‘Well, I can vote remotely, right?’” House Rules Committee Chairman Rep. Jim McGovern, a Massachusetts Democrat, said earlier this month of his colleagues. “No, you can’t.”

In a memo this week, Congress’ chief physician, Dr. Brian Monahan, and House Sergeant at Arms Paul Irving told House members that any guests, including family, will have to follow local District of Columbia requirements for COVID-19 testing.

On a day when members’ families and friends normally swarm all over the Capitol, incoming House freshmen will be allowed just one guest apiece in the chamber’s gallery to watch them take their oaths. Returning members will not be allowed any guests in the gallery.

Top Democrats have checked on the availability of lawmakers who’ve had serious health problems. McGovern says Rep. Alcee Hastings, the Palm Beach Gardens Democrat, 84, who’s been fighting pancreatic cancer, has told him he intends to attend. Rep. Mark DeSaulnier, the California Democrat who nearly died from pneumonia after falling while running in March and has been convalescing ever since, says he’s told Pelosi he will return to the Capitol for opening day.

“I’m planning on going back because that’s my job,” said DeSaulnier, 68.

Pelosi retains the support of most Democrats, who revere her for leading their 2018 recapture of House control and their battles against President Donald Trump. She’s kept her party’s moderates and progressives largely united and raised boatloads of campaign cash.

But at 80, about the same age as her top two lieutenants, Pelosi remains a source of frustration for younger Democrats eager to climb the leadership chain. Discontent and division have grown after expected gains in last month’s elections evaporated and 12 Democrats lost House seats, prompting calls for fresh messengers in response to criticism that party leaders did a poor job of campaigning on the country’s deep economic problems.

No Democratic rival to Pelosi has emerged, greatly diminishing the odds she’ll be toppled. Perhaps unanimously, Republicans will back Rep. Kevin McCarthy of California for speaker, but he seems destined to become minority leader again.

Even so, Pelosi must minimize the number of Democrats opposing her.

Of 15 Democrats who bucked her when she was elected speaker in January 2019, three lost reelection last month. One is in a race where votes are still being counted and another became a Republican.

That leaves 10 Democrats who opposed her two years ago. Of those, Washington Rep. Kurt Schrader has said he’s now open to backing her and at least two others have said they will do so, Jason Crow of Colorado and Jim Cooper of Tennessee.

“She has led a contentious Democratic caucus well during the pandemic and the Trump presidency,” Cooper said.

It’s unknown how many of the 15 incoming Democratic freshmen might oppose Pelosi.

Some suggest the tight numbers might encourage Pelosi’s Democratic critics to force the balloting into a rare second round, when she could eventually win but perhaps be forced into promises about bills the House would consider or other concessions. People mentioning this scenario insisted on anonymity to describe behind-the-scenes conversations.

Voting for speaker has needed multiple ballots only 14 times, including in 1923, the only time that has occurred since the Civil War.