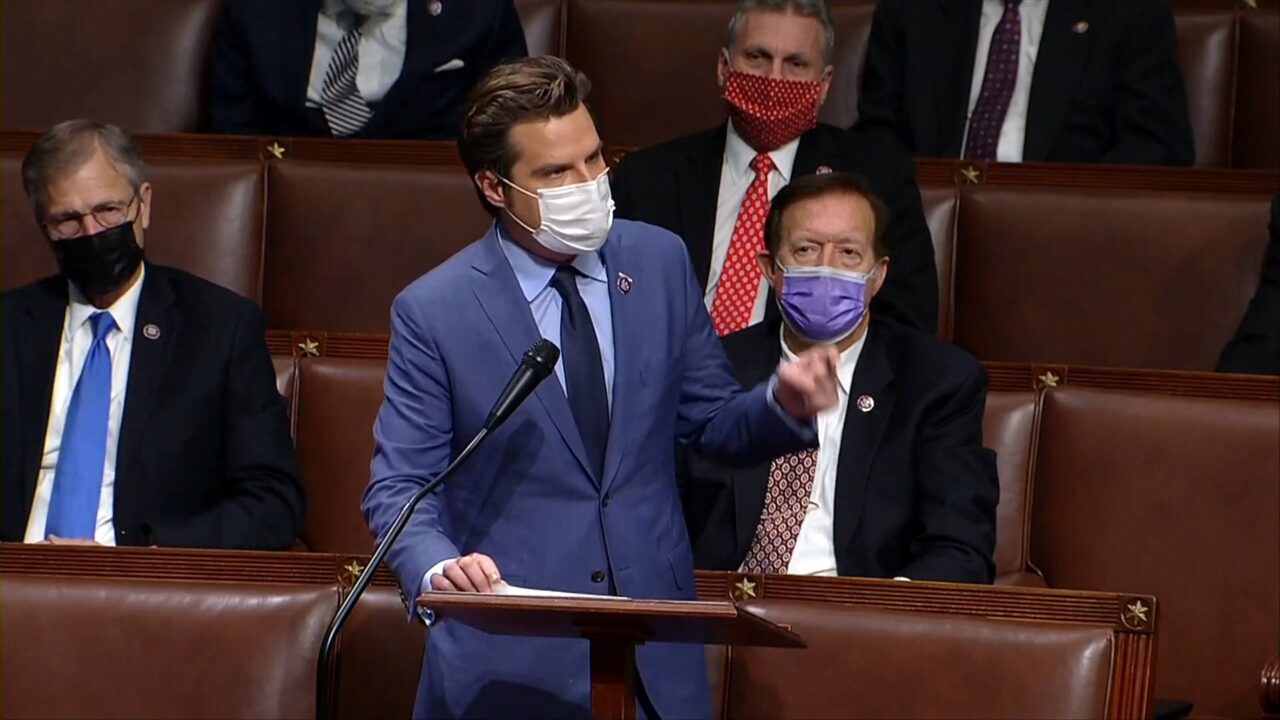 In a post-riot debate in which most Republicans and Democrats in the House of Representatives dialed back rhetoric regarding the challenge to Joe Biden‘s election, Republican Matt Gaetz went another way.

In a late-night, fiery defense of President Donald Trump and condemnation of the 2020 presidential election, the Fort Walton Beach Congressman blamed Democrats’ rhetoric and antifa for the attack on the U.S. Capitol. And he denounced the presidential election as rife with systematic fraud.

Gaetz, long one of Trump’s most ardent defenders, was one of the few Republicans who explicitly defended him Wednesday night. After the riots had changed how most were feeling, most other Republicans who spoke in the evening debate, even those objecting to Biden’s victory, took measured approaches, calling for unity and understanding of one another’s positions.

“We should come to build America up,” he said. “Not tear her down and destroy her, and I sure am glad that at least for one day, I didn’t hear my Democrat colleagues calling to defund the police.”

He even disavowed Trump of any blame for the storming of the Capitol, which almost everyone else attributed to people who supported Trump and were angry because they believed his claims that the election was stolen. They had headed to the Capitol after hearing Trump rail against the election and Democrats and after he told them to go there, during a morning rally near the White House.

Nope, Gaetz contended. People were angry because Democrats’ rhetoric fired them up, Gaetz suggested. And he suggested that members of the shadowy, left-wing, anti-fascist group antifa may have led the charge.

“This morning, President Trump explicitly called for demonstrations and protests to be peaceful. He was far more — you can moan and groan — but he was far more explicit about his calls for peace than some of the BLM and left-wing rioters were this summer when we saw violence sweep across this nation,” Gaetz said.

“Now we came here today to debate, to follow regular order to, to offer an objection, to follow a process that is expressly contemplated in our Constitution. And for doing that, we’ve been called a bunch of seditious traitors. … And when those things are said, people get angry,” Gaetz said.

“I don’t know if the reports are true, but the Washington Times has just reported some pretty compelling evidence from a facial-recognition company showing that some of the people who breached the Capitol today were not Trump supporters. They were masquerading as Trump supporters. And in fact, they were members of the violent terrorist group, antifa,” Gaetz said.

(The Washington Times later removed the story from its website. The facial recognition company, XRVision, told The Hill it had demanded the article be taken down because it was false.)

The position of the Panhandle Congressman was ultimately not much of a surprise as Gaetz has been one of the Trump’s most ardent defenders in the House. He has developed a national reputation for his support of the President and tied to the base movement.

Gaetz rose to object to the seating of electors from Arizona. The matter was voted down overwhelmingly in the House as scores of Republicans joined all Democrats in voting against it. The question also lost in the in the Senate, where only six Republicans voted to object. The final vote in the House was 121-303. All of the votes in favor of the challenge came from Republicans.

“States that do not run clean elections should be stripped of their electors,” Gaetz said. “This fraud was systemic. It was repeated. It was the same system, and I dare say it was effective.”

Gaetz ultimately was one of 12 Republican members from Florida who voted against certifying slates of electors from Arizona or Pennsylvania. More Republicans nationwide voted against the Pennsylvania slate, with 138  voting yes to the objection and 282 voting no. No senators joined in challenges for any other states.

The entire challenge proved ultimately in vain to any who thought it might overturn Biden’s defeat of Trump. Every slate of electors ultimately was certified for a tally of 306 to 232 votes.

nextBarack Obama says violence at Capitol a moment of shame