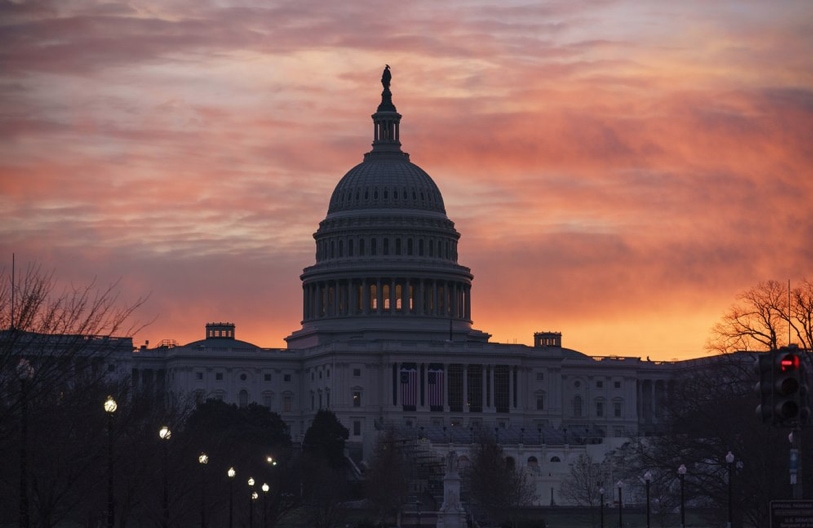 Anger between members runs high on verge of impeachment vote.

This time the fury enveloping the U.S. Capitol comes not from an insurgent mob but from within.

The anger on display is searing — Democrat against Republican; Republican against Republican; legislators of both parties against the catastrophic security failure that left top leaders of the government vulnerable to last week’s violence as well as to the coronavirus in their ranks.

The rage is being stoked even hotter by the passions aroused by Democrats’ fresh drive to impeach President Donald Trump.

This is a “powder keg” moment, one Democrat said.

It’s certainly a historic one.

The House is moving toward making Trump the first president to be impeached twice as part of an extraordinary effort to remove him from office before Democrat Joe Biden’s inauguration a week from Wednesday. The charge to be brought against him: “incitement of insurrection.”

Once again the phrase of the founders, “high crimes and misdemeanors,” has been turned against Trump, who was acquitted by the Senate in his first impeachment trial. And tempers are flaring in congressional hallways and offices still cleaning up from the trashing by the attackers.

Shaken members, long accustomed to protective bubbles, inquired whether they can expense their own bulletproof vests to taxpayers (yes they can). Democrats assailed a collection of always-Trumpers — Republicans who pressed the president’s false accusations of a fraudulent election even after the mob, motivated by the same lies, had finally been cleared away.

Democratic Sen. Bob Casey of Pennsylvania, among others, called for the expulsion or censure of Republican members who argued Trump’s case for overturning the will of the voters, if those lawmakers refuse to resign. Democrats were primarily after Sen. Josh Hawley of Missouri, Sen. Ted Cruz of Texas and a selection of House lawmakers who had also tried to throw up obstacles to Biden’s election certification.

“Failing to hold those responsible for the insurrection accountable would be a profound injustice and give a green light to future authoritarians,” Casey said.

Said Democratic Rep. Jamie Raskin of Maryland: “They have a full-blown independent reality, totally cut apart from the world of facts, and that is the groundwork for fascism. When you add racism, anti-Semitism, conspiracy theory and magical thinking, that is an absolute powder keg in terms of an assault on democracy.”

There was Republican to Republican finger-pointing, too. Much of it was aimed at House Minority Leader Kevin McCarthy of California for not showing enough leadership, according to some former lawmakers as well as congressional GOP aides who spoke on condition of anonymity because they were not authorized to discuss the matter publicly.

Some House Republicans are upset that McCarthy, one of Trump’s staunchest defenders in Washington, defended him too forcefully and for too long, making it harder to dissociate themselves from Trump after the Capitol siege.

In contrast, Senate Majority Leader Mitch McConnell of Kentucky explicitly criticized Trump’s drive to overturn Biden’s election, saying it would “damage our republic forever.” He did so even as the mob breached the Capitol and lunged toward the chambers against outnumbered police.

McCarthy acknowledged outrage among his Republican colleagues over the attack in a letter to them Monday declaring “I share your anger and your pain” and making sure they knew the mob’s threat also came close to him.

“Zip ties were found on staff desks in my office,” he wrote. “Windows were smashed in. Property was stolen. Those images will never leave us.”

As if nerves weren’t raw enough over the actions of Trump and his diehard loyalists, three Democrats who sheltered with Republican House members when they were spirited to a secure room disclosed they had since tested positive for COVID-19. Some of the Republicans in that room over those hours had refused to wear masks.

Indeed, one of the newly infected, Rep. Pramila Jayapal of Washington, said “several Republicans not only cruelly refused to wear a mask but recklessly mocked colleagues and staff who offered them one.”

Reps. Bonnie Watson Coleman of New Jersey and Brad Schneider of Illinois were the others who announced positive tests after their time in the room as everyone waited to hear whether more cases were coming.

“In the midst of a deadly assault on our United States Capitol, a number of our Republican colleagues laughed off rules designed to keep not just their colleagues safe, but to protect the lives of the teams of workers keeping things going, law enforcement, and staff throughout the Capitol,” said Rep. Debbie Dingell, a Michigan Democrat.

On Tuesday, the House sergeant at arms office issued a statement saying all members and others going into the chamber must be screened for prohibited items, including firearms, and anyone failing to wear a mask on the House floor will be removed. The House was also voting to impose fines on lawmakers without face coverings.

The screening requirement comes as at least one lawmaker, freshman Rep. Lauren Boebert, a Colorado Republican who has talked openly about carrying her firearm around town and onto the Capitol grounds, which has infuriated gun-control Democrats.

The new metal detectors outside the House chamber also galled some Republicans, some of whom uttered obscenities or ignored the devices, claiming they were impeding them from voting.

At a virtual meeting of the House rules committee, Democrats implored Republicans to stop peddling Trump’s myths of a stolen election. Trump’s accusations have been refuted for weeks by judges and election officials but motivated the mob and are still believed by legions of Trump supporters.

“When does service to Donald Trump end?” demanded Democratic Rep. Joe Morelle of New York. “It should be an easy one to answer.”

“When the people speak, it’s over,” he went on. Otherwise, “we have nothing. There is no America.”

There were some signs that the top Republican in the House was backing off his unwavering show of loyalty to Trump.

McCarthy had joined most House Republicans in December in supporting a lawsuit to block Biden’s election, and again last week in two votes against certifying Biden’s win. The lawsuit and both votes failed. He has so far avoided lambasting Trump publicly. But in a private conference call Monday with GOP colleagues, he expressed an openness to censuring Trump.

McCarthy “amplified the president’s disinformation about widescale election fraud,” former Sen. Jeff Flake, a Republican from Arizona, who often clashed with Trump, said in an interview last week. “That has been irresponsible. Mitch doesn’t fall in that category.”

“McCarthy is all in with Trump,” said Paul Cook, who retired in January as a GOP congressman from California and had differences with him over the years. “I think sometimes you have the greater good of the country, it’s not always the party.”

To Cook, it all comes down to the oath of office. “You take an oath, a lot of people kind of forget the words to that,” he said.

In their oath of office, lawmakers vow to defend the Constitution “against all enemies, foreign and domestic.”

previousLobbyists shift away from Florida Capitol amid COVID-19