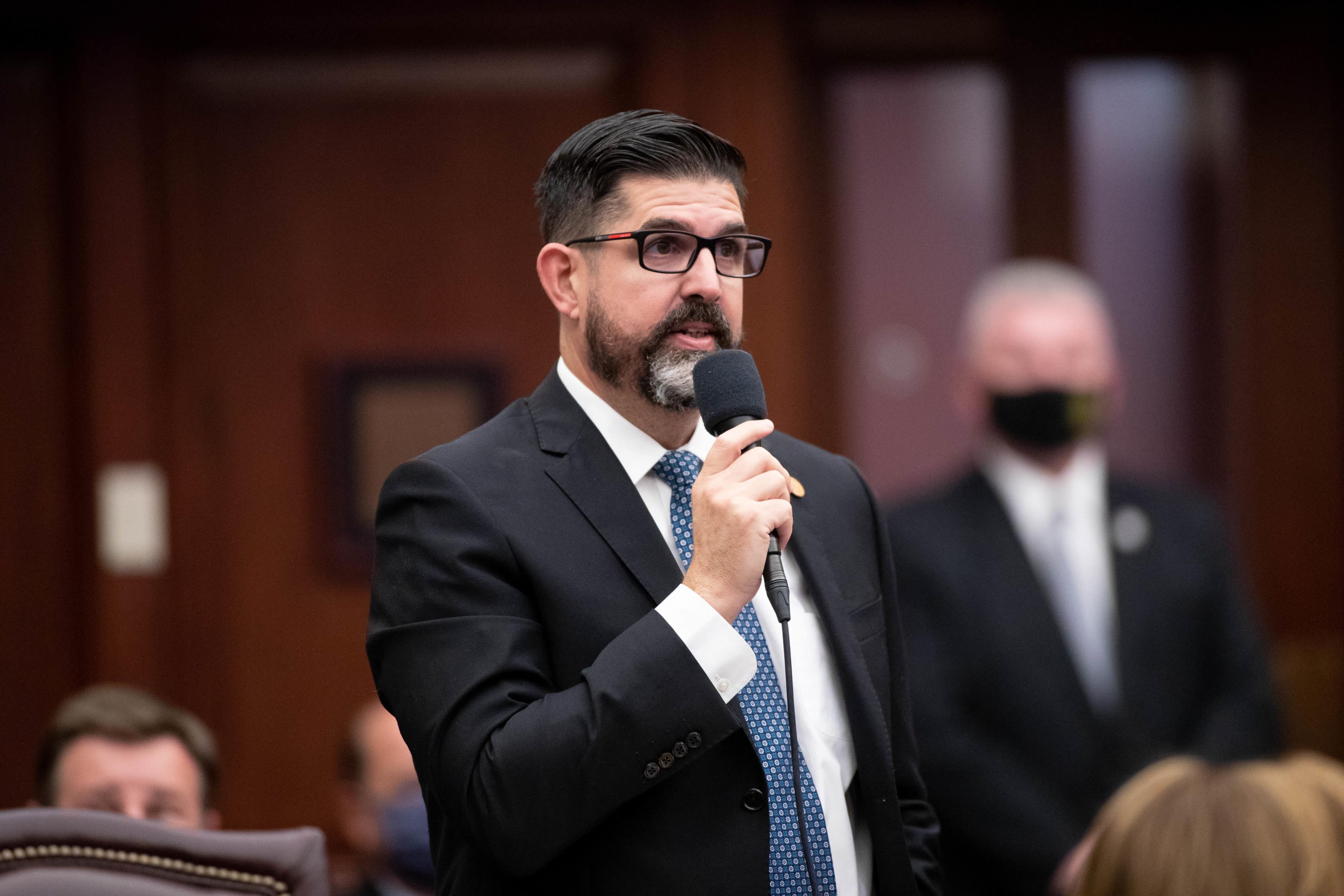 Florida Politics has obtained the cease and desist letter sent to Radio Caracol.

Sen. Manny Díaz has sent a cease and desist letter to a radio show hosted by former Hialeah Mayor Raúl Martínez for elevating accusations of misconduct the Senator calls a “slanderous political attack.”

Martínez, who led the city as a Democrat for 24 years, hosted Jenny Lee Molina and Sasha Tirador on his radio show, Radio Caracol, Tuesday afternoon after the former tweeted allegations calling Díaz a “pervert” and an “inappropriate teacher.”

Díaz, a Hialeah Republican, took to Facebook and Instagram Tuesday evening to denounce the accusation, which he says is false and was elevated by Democratic operatives.

Díaz, 47, taught social studies for four years at Hialeah-Miami Lakes beginning in 1995, according to the Miami Herald. He also spent two years as an assistant principal.

“Throughout my career as an educator, administrator and public servant, I have always stood on the side of our students regardless of race, gender or personal point of views,” he wrote. “It is disgusting and impermissible that Democrat operatives have fabricated a slanderous political attack to target me and my character because they dislike my strong conservative values and opinions.” 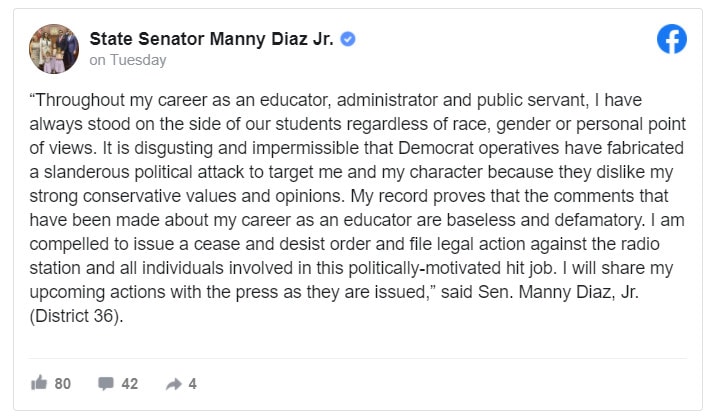 “My record proves that the comments that have been made about my career as an educator are baseless and defamatory,” he continued. “I am compelled to issue a cease-and-desist order and file legal action against the radio station and all individuals involved in this politically-motivated hit job.”

In response to one of the Senator’s tweets Jan. 7 about counseling for students after the U.S. Capitol riot, Molina tweeted her own reply, sparking the conflict.

“Diaz, it’s concerning that myself and other high school students you taught still think you’re a pervert and inappropriate teacher who talked about “rolling at Space” openly. You were 28. I was 17. Still remember you trying to be the “cool” teacher who was a little too friendly,” she said.

“You were also a baseball coach and one of the other coaches (Coach Plaza) married his own student right after she graduated high school — it was the culture between the coaches who were 10 years older or so to be flirty: ‘You look nice today’ and ‘your legs look toned.’ Umm,” she continued. 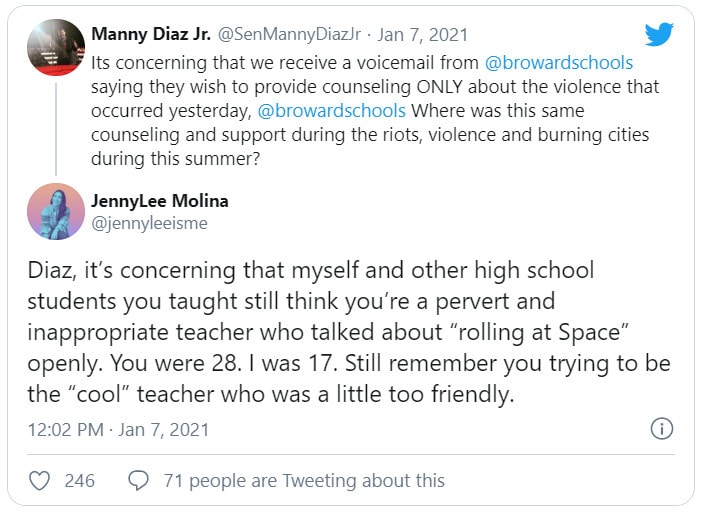 The alleged claims happened 24 years ago. Díaz has run for office five times over the last 10 years and neither these claims, nor any other, have come to light.

Earlier Wednesday, Roberto Cespedes, chief content producer at Radio Caracol, deferred questions on the matter to Martinez, according to the Herald.

“To be abundantly clear, Senator Diaz fully and unequivocally denies these baseless and defamatory claims,” according to the cease and desist letter. “As will be illustrated below, these assertions made now 20 years later contradict Ms. Molina’s own statements made in the past and are clearly politically motivated due to Senator Diaz’s conservative political views.”

The letter highlights a text Molina sent to Díaz in July 2013, which Díaz’s attorney says contradicts her recent claims.

“Oh, I am soooo grateful to you as a teacher and now a great community leader … Thank you, so happy to reconnect. You were a great teacher!” reads the text.

Pointing to the 14-year gap between when Molina graduated and when she sent the text, attorney Robert Fernandez says, “there was no reason for Ms. Molina to feel compelled to say anything positive of Senator Diaz, if, in fact, it is true that he had been so egregiously “inappropriate” as a teacher.

An Instagram text Molina sent on Friday claimed: “I never said I was a victim, nor did he do anything illegal for me to go to the police.”

In a subsequent tweet, Molina said she was “triggered” by the Senator last week “pretending to care about mental health when his own legislation defunds public schools including counselors.” She repeated that sentiment on Martínez’s show.

In her Twitter bio, Molina identified herself as a “former digital communications creative” for Joe Biden‘s Florida campaign, according to a screenshot provided in the letter. That past work has since been removed from her bio.

“I have nothing to gain by directly confronting @SenMannyDiazJr in a tweet. This isn’t a political attack; it’s a recollection of my personal experience. I’m not a “democrat operative,” but he is using our differences to cast doubt in order to protect himself. I stand by the truth,” she tweeted early Wednesday.

Martínez is one of Díaz’s political rivals.

“As a former Democratic congressional candidate in 2008, Mr. Martinez was only too eager to hear these scandalous claims against a political opponent,” Fernandez writes. “Any assertion that this is not politically driven is respectfully laughable.”

Former Rep. Cindy Polo, a Miramar Democrat who lost her reelection bid in November, chimed in Jan. 7, saying she had heard the allegations before.

“Heard this from a few former students and now constituents. They didn’t speak up bc he later became Principal, I believe. I also did not think it was my place to tell someone else’s story,” she tweeted. 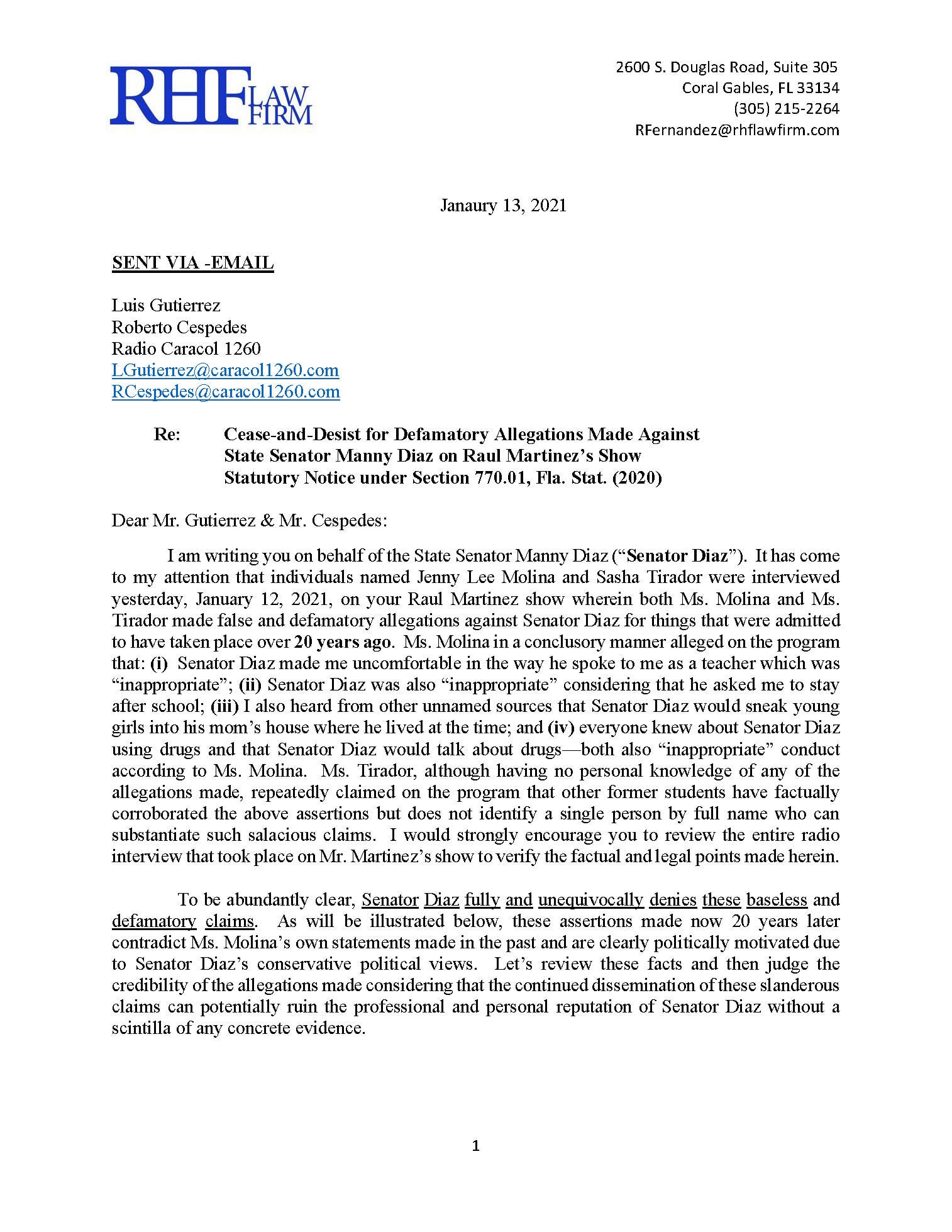 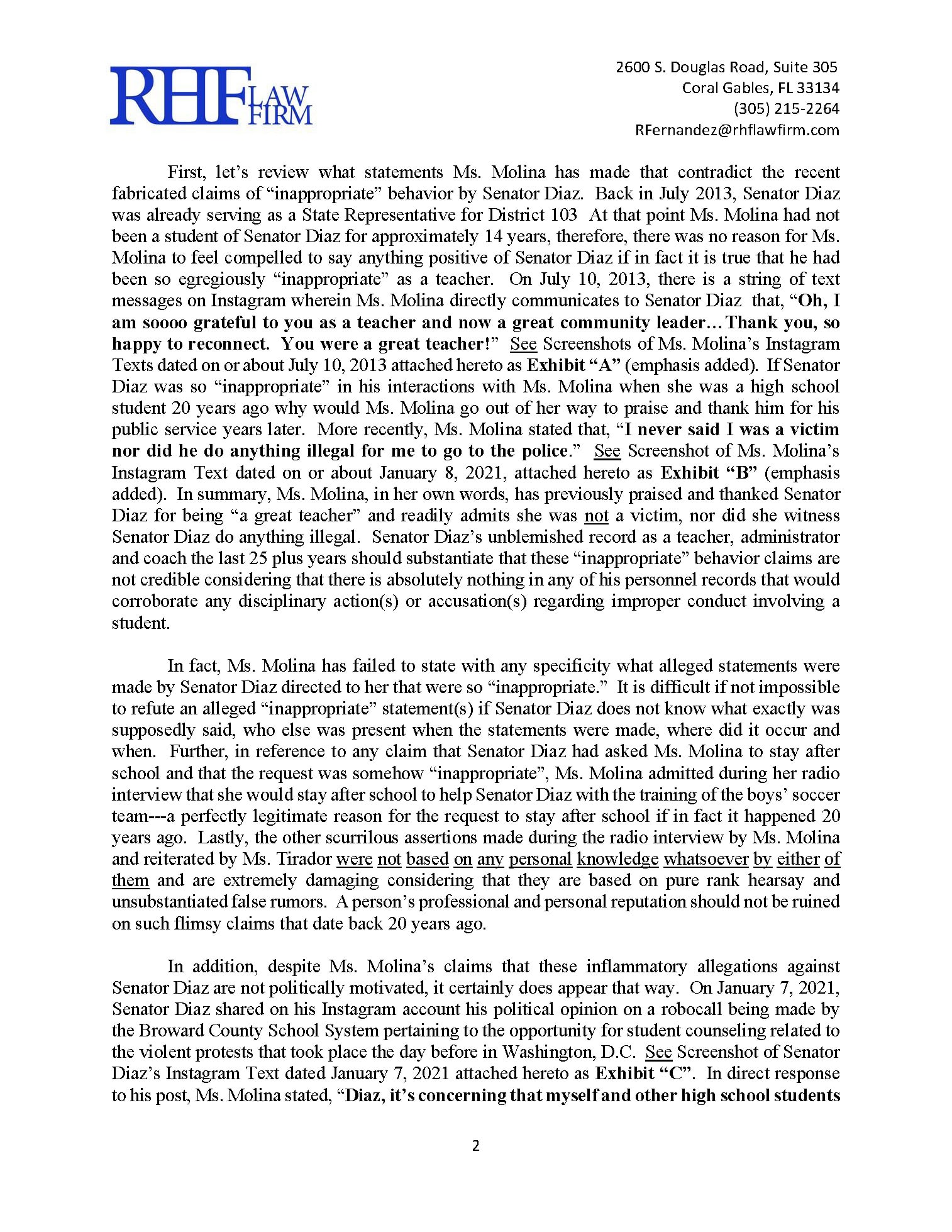 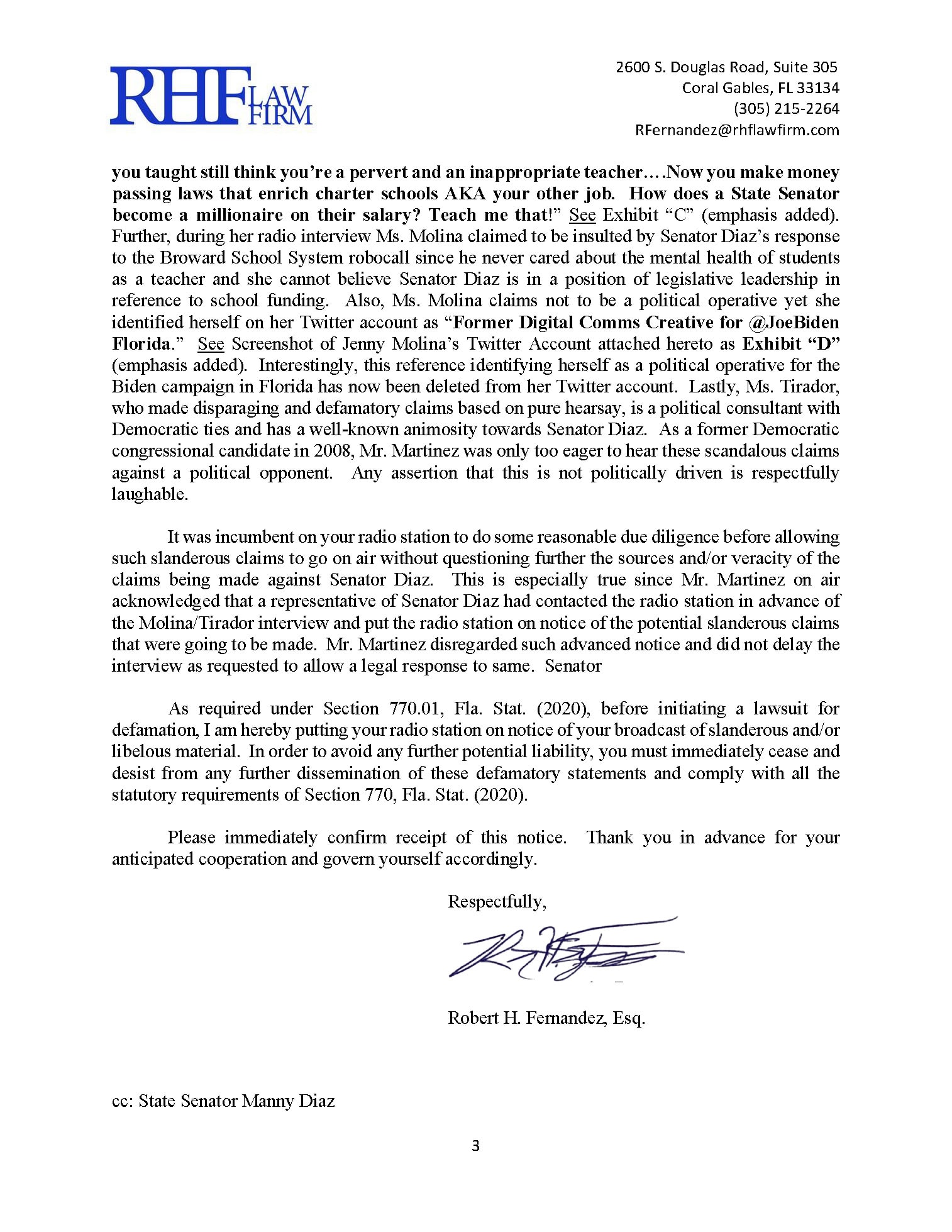 nextHillsborough GOP leader leaves party because it's not Trumpy enough