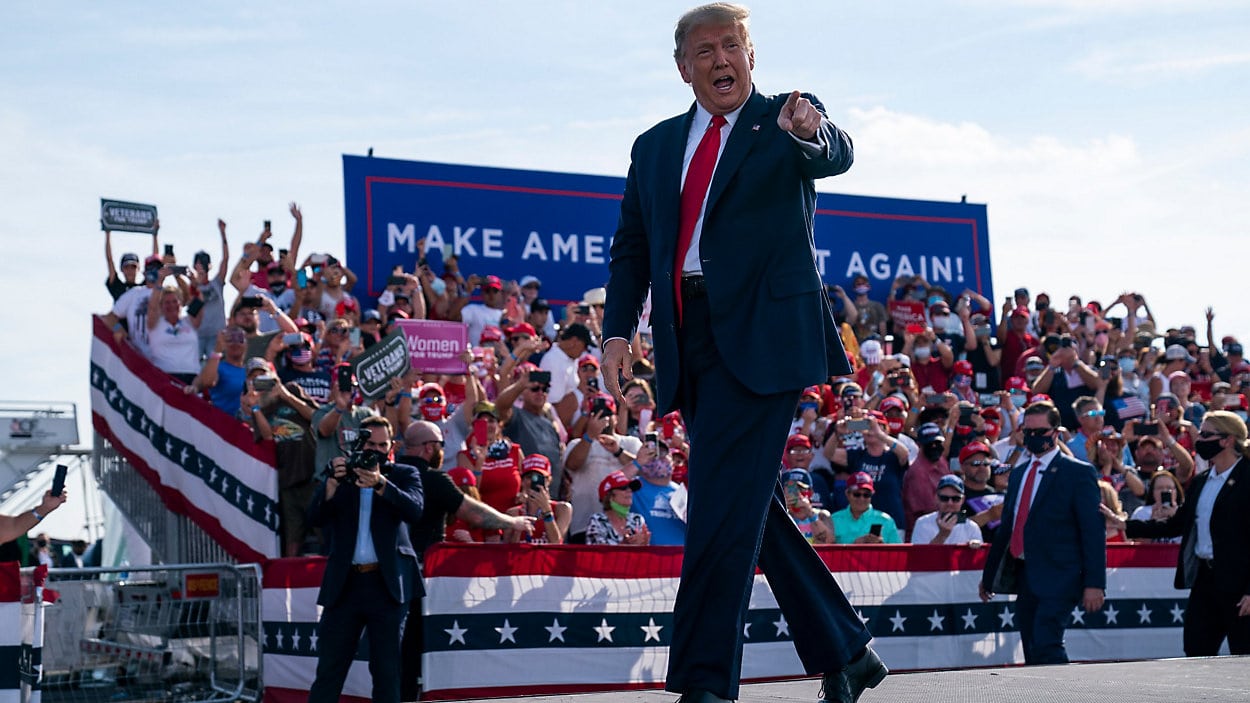 As the Republican Party of Florida holds its annual meeting, political leaders in Florida look to a future without Donald Trump as President. But with Trump and some of his adult children moving to Florida, it’s not necessarily a future without Trumpism.

Even after the Capitol riots led to a second impeachment for the outgoing President, prominent Republican leaders say he remains popular with the base.

“The support in Florida is still strong,” said JoAnn DeBartolo, Collier County state committeewoman. “We’re still having rallies on corners.” That included “Stop The Steal” rallies outside Senators homes ahead of certification of electoral results, which prompted upheaval in Washington last week. But in conservative areas like Naples, it has continued even in the period afterward.

Christian Ziegler, vice chair of the Republican Party of Florida and Sarasota state committeeman, decried the violence in the Capitol last week. But he also said critics who hold Trump responsible only served to be more divisive and inspire defense of the President among his supporters.

“Look, the energy and enthusiasm in the Republican Party has never been greater than it is under Donald Trump,” he said. ”With Donald Trump being a Florida resident with his home in Mar-A-Lago, and Southeast Florida really being a hub of activity for Donald Trump and Trump supporters, I think he is going to have a long lasting impact on the party going forward.”

Ziegler went so far as to predict Republicans running for office will continue to brand themselves as Trump-style politicians for years.

“After Ronald Reagan was President, for 20 years the first mailer out of the gate for any candidate was to say ‘I am a Ronald Reagan Republican.’ I believe the first one out of the gate for a long time, at least for the immediate future, will now be ‘I am a Trump Republican,’” Ziegler said. “That brand is one that speaks to people, that you are someone who fights for people and goes against the grain, who fights for Americans that feel they don’t have a voice.”

It’s a different response than that seen in Washington, D.C., where a record 10 Republicans in the House just cast votes to impeach a member of their own party. But every Florida Republican in the House voted against or denounced impeachment.

Three members of Trump’s Cabinet and a number of staff members resigned in protest of Trump not speaking more forcefully against violence in the Capitol.  But among party leaders, that exodus gets largely dismissed as establishment figures polishing their resume as they hunt for new jobs in ‘The Swamp.’

Before the Electoral College vote or the riots, RPOF state chair Joe Gruters said the strong position of the party in the Sunshine State owes a lot to Trump. “This is Donald Trump’s party and he will play an oversized role in national politics and in Florida,” he said. “All you have to do is look at the influence with the base and our elected officials. Ron DeSantis wouldn’t be Governor if it wasn’t for Donald Trump.”

It’s possible Gruters may not be state chair he had not come out early for Trump during the primaries in 2016 and served as the President’s Florida co-chair that year as he pulled an upset victory in Florida and other states that went for Barack Obama in 2008 and 2012.

Gruters hasn’t been available to speak on the topic since the Capitol riots as he prepares for the state party’s annual meeting Friday and Saturday at Rosen Shingle Creek in Orlando. At the meeting, Gruters appears a favorite for reelection as state chair, with many members around the state crediting his loyalty to Trump as a key reason.

That last part seems especially relevant, since Rubio, who is expected to seek reelection to the U.S. Senate, will appear on the ballot again in 2022. Gruters said DeSantis’ and Rubio’s reelection campaigns will be the top priorities for the party in two years.

But there’s angst within the party about whether Rubio showed sufficient loyalty to Trump in the aftermath of the election. He spoke against objections to Joe Biden’s electoral college win on the Senate floor following the riots. Leaders like DeBartolo were already calling for Rubio to resign ahead of that vote, and Trump ally Roger Stone, who spoke at some of the Stop The Steal events in Florida, has made noise about challenging or recruiting a primary challenge to Rubio.

Party insiders note that whatever happened with the national results in the election, Trump won Florida by a healthy margin in November. Perhaps more relevant to his influence in state politics, a number of Trump enthusiasts won spots on the state committee for the RPOF in August, in many cases beating long-time members who became involved in state politics when former Gov. Bush remained Florida’s most prominent Republican.

Yet, an exception to prove the rule may be Matt Caldwell, who beat a Trump loyalist for Lee County state committeeman. He campaigned for Rubio in the 2016 elections, including penning a letter to the News-Press saying he would never vote for Trump.

But while Caldwell since his election as committeeman has been critical of the state party, he was reluctant to decry Trump even after last week’s riots. Rather, he said the party needs to look to a future conscious of the populist tone that has reshaped the party since 2016, something definitely spurred by the outgoing President.

“Regardless of anything else, these last four years were a permanent paradigm shift,” Caldwell said. “This was the last ‘Boomer’ election and the leftover Cold War-era policies of lop-sided trade agreements and military adventurism are done. Eight years ago, President Obama mocked an ascendant China. Now China openly drives to supplant the USA as the premier world power.

“D.C. media obsesses over outsized personalities, but the voters, millions upon millions, have shown that they are living in the 21st Century, even if too many mainstream political leaders passed their ‘sell by’ date in Y2K. The candidate(s) that meet the demands of these voters will be empowered to lead in the coming years.”