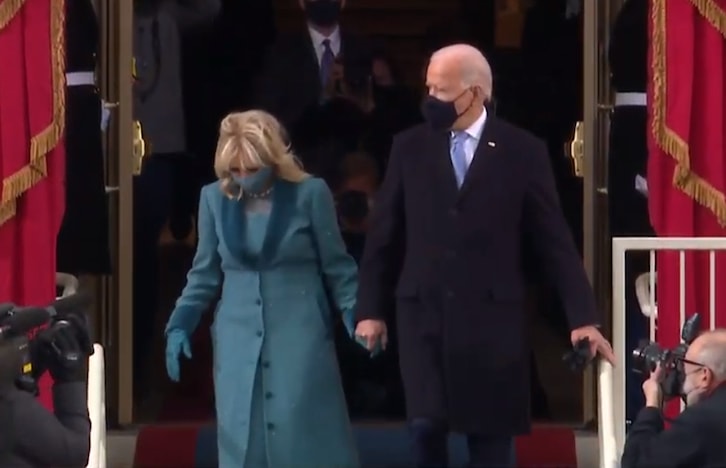 Joined by the Obamas, Bushes and Clintons.

All of the former U.S. Presidents who are attending President-elect Biden’s inauguration have arrived at the U.S. Capitol.

Shortly before 11 a.m., at least six members of the U.S. Supreme Court arrived, along with most of the congressional leadership.

The Bidens arrived on the Capitol platform at 11:19 a.m. as a light dusting of snow fell, welcomed by Inauguration Committee Co-Chair Sen. Amy Klobluchar of Minnesota.

“This is the day when our democracy picks itself up, brushes off the dust and does what America always does, goes forward as one nation, under God, indivisible, with liberty and justice for all.”

George W. Bush and his wife, Laura, were first to arrive at the complex on Wednesday morning, several hours before Biden’s swearing-in ceremony.

Barack and Michelle Obama and Bill and Hillary Clinton followed shortly thereafter, with each couple arriving in separate motorcades.

The other living former President, 96-year-old Jimmy Carter, previously announced he would not attend Biden’s inauguration. Carter and his wife, 93-year-old Rosalynn Carter, have largely spent the coronavirus pandemic at their home in Plains, Georgia.

Carter had been the first former president to confirm that he was attending Donald Trump’s inaugural in 2017.

Trump and first lady Melania Trump departed Washington earlier Wednesday, skipping the Biden inaugural festivities and heading straight to their home in Florida. As Pence’s were arriving at the Capitol, the Trumps were arriving in Florida. Trump is the first president since Andrew Johnson not to attend the inauguration of his successor.

The President-elect is wearing a navy suit and navy overcoat by Ralph Lauren. Jill Biden is wearing an ocean-blue wool tweed coat and dress by American designer Alexandra O’Neill of the Markarian label.

Aides say Harris is wearing Christopher John Rogers and Sergio Hudson. Both are Black designers, Rogers from Louisiana and Hudson from South Carolina.

Inauguration Day looks unlike anything the nation has seen before as the scars of COVID-19 and the Jan. 6 insurrection at the U.S. Capitol turn the West Front into a virtual ghost town compared to years past.

Republished with permission from The Associated Press. The staff of Florida Politics contributed to this report.