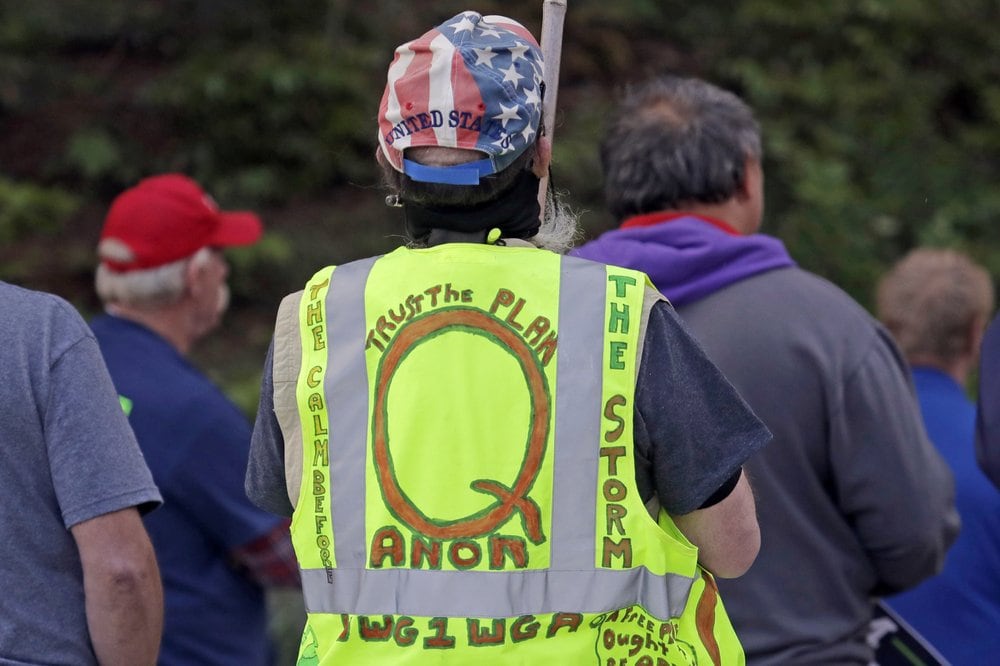 QAnon followers grappled with anger, confusion and disappointment on Wednesday.

For years, legions of QAnon conspiracy theory adherents encouraged one another to “trust the plan” as they waited for the day when President Donald Trump would orchestrate mass arrests, military tribunals and executions of his Satan-worshipping, child-sacrificing enemies.

Keeping the faith wasn’t easy when Inauguration Day didn’t usher in “The Storm,” the apocalyptic reckoning that they have believed was coming for prominent Democrats and Trump’s “deep state” foes. QAnon followers grappled with anger, confusion and disappointment Wednesday as President Joe Biden was sworn into office.

Some believers found a way to twist the conspiracy theory’s convoluted narrative to fit their belief that Biden’s victory was an illusion and that Trump would secure a second term in office. Others clung to the notion that Trump will remain a “shadow president” during Biden’s term. Some even floated the idea that the inauguration ceremony was computer-generated or that Biden himself could be the mysterious “Q,” who is purportedly a government insider posting cryptic clues about the conspiracy.

For many others, however, Trump’s departure sowed doubt.

“I am so scared right now, I really feel nothing is going to happen now,” one poster wrote on a Telegram channel popular with QAnon believers. “I’m just devastated.”

Mike Rothschild, author of a forthcoming book on QAnon called “The Storm is Upon Us,” said it’s too early to gauge whether the wave of disillusionment that swept through the QAnon ranks Wednesday is a turning point or a fleeting setback for the movement.

“I think these people have given up too much and sacrificed too much in their families and in their personal lives,” he said. “They have believed this so completely that to simply walk away from it is just not in the realm of reality for most of these people.”

On Wednesday, as it became obvious that Biden’s inauguration would proceed, many QAnon message boards and online groups were bombarded by hecklers and trolls making fun of the conspiracy. Some longtime QAnon posters said they planned to step away from social media, if only temporarily.

“Trump has said, ‘THE BEST IS YET TO COME.’ I’m not giving up,” Telegram user Qtah wrote in an announcement to his 30,000 subscribers that he was taking a social media break.

Some groups seized the moment to try to recruit disillusioned QAnon supporters to white supremacy and other far-right neofascist movements like the Proud Boys. On Wednesday, for example, an anonymous poster on 4chan posited in a thread that “this would be the perfect time to start posting Nat Soc propaganda in Q anon groups. Clearly, this is a very low point for Q believers, and once people have been broken, they will look for ways to cling back to hope again.” Nat Soc stands for national socialism, commonly referred to as Nazism.

QAnon emerged in 2017 through anonymous, fringe online message boards before migrating to Twitter, Facebook and other mainstream platforms that were slow to purge the conspiracy theory from their sites.

Although Facebook and Twitter platforms vowed last year to rid their sites of QAnon, accounts with thousands of loyal followers remained until this month, when the tech companies finally disabled thousands of users who used violent rhetoric to encourage protests of the election results at the U.S. Capitol on Jan. 6.

The crackdown sent some of the conspiracy theory’s most ardent promoters fleeing to less populated social media sites like MeWe and the Telegram messaging app, where they quickly raked in thousands of followers.

But the social media companies’ suspensions paralyzed QAnon chatter on the sites, with mentions of popular QAnon hashtags like #FightforTrump and #HoldTheLine declined by roughly 90%, according to an analysis by media intelligence firm Zignal Labs.

Other QAnon believers still found ways to promote their message on Facebook and Twitter, urging followers to hold out hope that Trump would find a way to stay in office or expose the “deep state” network of government leaders who they believe operate a child sex trafficking ring.

Videos and posts on Facebook, Telegram and YouTube predicted Trump would take over the emergency broadcast system to declare martial law and arrest prominent Democrats.

“This presidential inauguration that we’re going to see coming up … I’m telling you it’s going to be the biggest thing we’ve ever seen in the history of the United States,” one pro-Trump singer, who promotes QAnon conspiracy theories, warned in a Facebook video viewed more than 350,000 times since Monday.

But the peaceful transfer of power from Trump to Biden came and went Wednesday.

“We gave it our all,” Watkins wrote in a Telegram post, minutes after Biden was sworn into office. “Now we need to keep our chins up and go back to our lives as best we are able.”

Travis View, a conspiracy theory researcher who co-hosts The QAnon Anonymous Podcast under his pseudonym, said Watkins encouraged Trump supporters to travel to Washington for the Jan. 6 rally that led to the Capitol riots.

“He did a lot of damage to a lot of people,” he said. “He’s responsible for a lot of pain.”

Other QAnon followers spent their time online Wednesday calling Biden an illegitimate president and accusing Democrats of pulling off voter fraud. Republican Rep. Marjorie Taylor Greene, who has expressed support for the conspiracy theories, called for Biden’s impeachment across her Twitter, Facebook and Telegram accounts as the new president was sworn in.

Other followers continued to hunt for clues that QAnon prophecies would be fulfilled, with several social media posts noting that Trump’s speech Wednesday was delivered in front of 17 American flags — a significant number to QAnon conspiracy theorists because “Q” is the 17th letter of the alphabet.

“I believe the game is still being played this is not over!” one QAnon user wrote to his 26,000 Telegram followers moments after Biden took office.